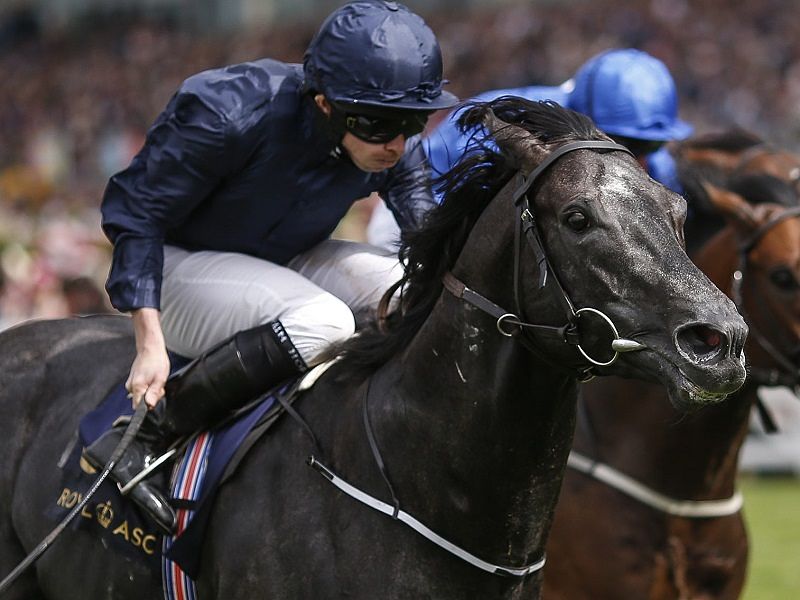 How did the races go Friday?  Here’s a quick recap:

Friday’s opener was the Group 3, $98,500 Albany, a race for two-year-old fillies that has eluded globetrotting US conditioner, Wesley Ward, thus far.  He sent out two runners this year to change that – Fairyland (Ward/O’Brien) and Princess Peggy (Ward/Flores).  Of the two, the betting public fancied Fairyland (7/1) over her stablemate, who went off at 23/1.  The favorite was Alpha Centauri (Harrington/O’Donoghue), who entered the race 2-for-2 for conditioner Jessica Harrington.  As is often the case in Ascot sprints, the 20-horse field split into two groups, one racing on the far side and one on the grandstand side.  Fairyland went right to the front for Ward, but had little in the tank inside the quarter pole.  Alpha Centauri made what appeared to be a winning move, but she was never able to catch longshot Different League (Palussiere/Hamelin), who caught a masterful ride that forced Alpha Centauri to try to slip through a tight spot up the rail.  She just wasn’t quite capable.  Different League, a 50/1 morning line shot bet to 25/1, paid $57.60 to Win. The Exacta over the favorite returned $206.20.   Princess Peggy checked in 10th, with Fairyland 12th.

The Group 2, $277,000 King Edward VII Stakes, originally known as the Ascot Derby (or ‘Darby’ if you’re on the other side of the pond) is a 1 ½-mile turf race for three-year-old colts and geldings.  This year’s field of 12 included five horses exiting the Group 1 Investic Derby at Epsom on June 3.  And while those five horses had finished 8th, 9th, 10th, 13th and 14th at Epsom, they were right at home Friday at Ascot as they finished 1st, 2nd, 5th, 7th and 10th.  The winner was Permian (Johnston/Kirby), who raced prominently throughout, took over from the early pacesetter, Glencadam Glory (Gosden/Tart), and held off a late charge from Khalidi (Gosden/Peslier).  The race’s 2/1 favorite, Crystal Ocean (Stoute/Atzeni) had every chance but tired down the stretch to finish 3rd.  A Win bet on Permian returned $13.00, while the Exacta was worth $136.00.

The first heavy favorite on the day was Coolmore’s Caravaggio (O’Brien/Moore), who was well backed by punters to the tune of 4/5 odds in the Group 1, $492,000 Commonwealth Cup.  And not to take away from the suspense, but he delivered Friday at Ascot, stretching his unbeaten record to a perfect 6-for-6.  Handled masterfully by Ryan Moore, Caravaggio exploded down the stretch to overtake the well-backed Godolphin tandem of Harry Angel (Cox/Kirby) and Blue Point (Appleby/Buick) within the final eighth of a mile.  This was Caravaggio’s four graded victory and his second at Ascot.  He won the Group 2 Coventry Stakes here last June and also won the Group 1 Keeneland Phoenix Stakes at The Curragh last August.  Now that he’s accomplished a victory at 1-mile, American racing fans will clamor to see him race this fall in the Breeders’ Cup at Del Mar.  Caravaggio returned $3.60 to Win and the Exacta over Harry Angel returned $7.60.  The lone American in the field, Bound for Nowhere (Ward/Flores), was no threat to the winners but did check in a solid 4th.  Wesley Ward, who owns and trains, should feel very proud of this positive result.

During yesterday’s recap, I remarked that Ryan Moore was having just an ‘ok’ start to his Royal Ascot meet.  That’s old news.  After a Group 1 sweep today, it’s safe to say that he’s once again asserted himself as the best rider at Royal Ascot.  In the Group 1, $529,000 Coronation Stakes, Winter (O’Brien/Moore) hit the wire first and Roly Poly (O’Brien/Heffernan) and Hydrangea (O’Brien/Beggy) filled out an all Coolmore Trifecta.  But make no mistake about it, nobody was touching Winter today.  The star daughter of Galileo raced midpack and burst home for her 4th win in 7 career starts, including three Group 1’s.  The lone American runner in the field, La Coronel (Casse/Geroux) raced midpack throughout, but lacked her usual late kick.  She stayed on decently to finish 5th.  Winter paid a paltry $2.80 to Win and the Exacta returned $15.60.

Friday’s Group 2, $198,500 Queen’s Vase will go down as one of the more peculiarly run races of the meet, primarily thanks to the exploits of Coolmore’s Wisconsin (O’Brien/Heffernan) who never appeared to have his mind on running this afternoon.  He went to the lead and ducked to the far rail soon after the start, fighting his rider, Seamie Heffernan, for much of the early going.  By the time he rejoined the field, the damage was done and he tired to finish far back.  On the other hand, you can’t commend the professionalism of winner, Stradivarius (Gosden/Atzeni) enough.  The son of Sea the Stars appear hopelessly bottled up throughout the running, never able to find room while racing on the rail in midpack.  But when a hole opened up late in the going, he burst home to nip Count Octave (Balding/Murphy) at the wire.  The favorite, Belgravia (O’Brien/Moore), failed in his attempt to give those connections three consecutive wins on the card.  Stradivarius paid $12.40 to Win and the Exacta returned $130.00.

Ascot’s Friday nightcap, the $98,500 Duke of Edinburgh, was yet another race that produced a surprising result.  And again, it was Godolphin getting the job done with a runner sporting its royal blue silks.  This time around it was Rare Rhythm (Appleby/Buick), who made a strong late push to the lead and prevailed over the well-meant Appeared (Varian/Atzeni), who had won a Class 3 Handicap over this course in May.  Rare Rhythm, dismissed at 25/1, paid an impressive $54.20 to Win, and the Exacta over Appeared returned $405.40.

Join us Saturday morning at 9:30AM ET for Closing Day at Royal Ascot!  The day’s feature race is the Group 1 Diamond Jubilee Stakes, which includes Bill Mott’s Long On Value.  Joel Rosario will ride.