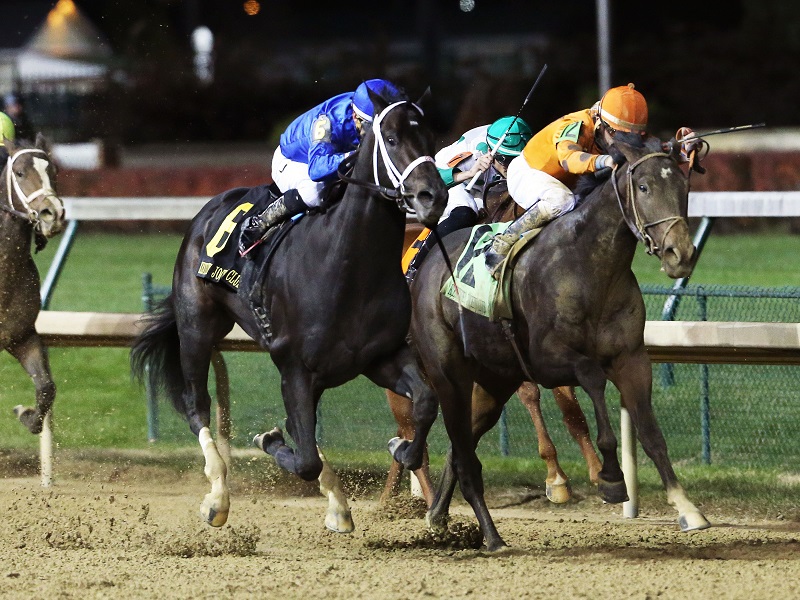 Enticed looms as the horse to beat in a field of 11 in a quest to join Cairo Prince (2014) and Mohaymen (2016) on the impressive list of winners of the 1 1/16-mile stakes that will headline a program offering five graded stakes for 3-year-olds. The son of Medaglia d’Oro stamped himself as a hot prospect for the 2018 spring classics with a narrow triumph over Tiz Mischief in the Kentucky Jockey Club (G2) in his juvenile-season finale at Churchill Downs in November.

“This is a key race for us to see how they stack up. He’s done everything right and he won a nice race last time out. The colt that he beat a nose at Churchill is probably the horse to beat for us, one of the ones to beat,” said McLaughlin, who trains the Kentucky-bred for Godolphin Racing LLC. “He’s doing great and we’re happy, but it’s hard to compare him to Cairo Prince and Mohaymen and other horses to him.”

Enticed debuted over a muddy track in a six-furlong maiden race at Saratoga Sept. 4, closing from off the pace after breaking from the rail to win going away by 1 ¾ lengths. He came back to run third behind multiple graded-stakes winner Firenze Fire and eventual Breeders’ Cup Juvenile (G1) winner Good Magic in the Champagne Stakes (G1) at Belmont Oct. 7. The McLaughlin trainee concluded his 2-year-old campaign while trying two-turns for the first time in the Nov. 25 Kentucky Jockey Club, in which he stalked the pace before launching a winning stretch drive and holding off a late-charging Tiz Mischief.

“He won his first start and we weren’t counting on that, but he did it. I didn’t think he was that kind of first-time-out winner, but he showed that he has that ability,” McLaughlin said. “He kind of didn’t have a perfect trip in the Champagne to be third. He came out of that race to run at Churchill in a full field. He was in a little tight all the way and he showed a lot of guts and got a lot of education out of the race, being in tight and taking some dirt. It was a very good race, an excellent performance and we hope we can duplicate that Saturday.”

Joel Rosario has been named to ride Enticed for the first time in the Holy Bull.

Trainer Dale Romans entered four horses in the Holy Bull, intending to run as many as three in the two turn prep, including Frank L. Jones Jr.’s Tiz Mischief and Calumet Farm’s Bandito. Romans is planning to run one of the Albaugh Family Stables’ duo of Free Drop Billy and Hollywood Star.

“It’s to get them all started, but it also fits for all the horses. If I run three, it’ll be for three different owners. I might be better for me to keep them all separated, but I think this is the best race for all these horses to start back this year,” Romans said.

Tiz Mischief broke his maiden in his third start and first race around two turns, rallying from 10th to win a 1 1/16-mile maiden test at Keeneland Oct. 7. He came right back to miss catching Enticed by a head after closing from 10th in the 1 1/16-mile Kentucky Jockey Club in his 2-year-old finale.

“Enticed is a top horse. There were a lot of nice horses in the race. My horse Promises Fulfilled ran third. We’ll have a rematch,” Romans said.

A son of Into Mischief, Tiz Mischief has produced a strong series of six workouts in preparation for his 2018 debut.

“He’s doing great. He’s moved forward. I think he’s going to be a force to be reckoned with this year,” said Romans, who named Robby Albarado to ride Tiz Mischief. “He’s been training lights out.”

Either Hollywood Star or Free Drop Billy will make a 3-year-old debut in the Holy Bull after finishing off the board in the Breeders’ Cup Juvenile (G1) at Del Mar Nov. 4. Hollywood Star finished second in the Saratoga Special (G2) and third in the Iroquois (G2) at Churchill before running evenly in a sixth-place Juvenile finish. Free Drop Billy, who finished second in the Sanford (G3) and the Hopeful (G1) at Saratoga before winning the Breeders’ Futurity (G1) at Keeneland, disappointed with a ninth-place finish in the Juvenile.

“Hollywood ran a nice race. I have no excuse for Free Drop Billy. I’ve quit trying to make one. He ran bad. Something wasn’t right that day. Horses that he beat beat him. He just didn’t run a jump, the only time in his life. He’s back training super. We’ll just draw a line through it,” said Romans, who named Irad Ortiz Jr. on Hollywood Star and Luis Saez on Free Drop Billy.

Bandito broke his maiden impressively in an off-the-turf race at 1 1/8 miles at Keeneland in his second lifetime start before dropping far back after setting the pressured early pace in the Remsen (G2) at Aqueduct Dec. 2.

“He ran a really good race at Keeneland off the turf and he’s been training really well down here,” said Romans, who awarded the mount to Edgard Zayas. “He had a good excuse in his bad New York race. We’re going to try him again against the big boys and see if he can get Calumet on the Derby trail. Bandito up will be close to the pace and the others will come running.”

Trainer Todd Pletcher, who has saddled three of the last four winners of the Florida Derby, entered a pair of promising colts in the Holy Bull, Audible and Pony Up.

Audible, owned by WinStar Farm, China Horse Club International and SF Racing, enters his 2018 debut off a pair of victories at Aqueduct. After finishing third in his debut at 6 ½ furlongs, the New York-bred son of Into Mischief broke his against state-bred company at a mile Nov. 15 and defeated open allowance company at a mile by 9 ¾ lengths.

Calumet Farm’s Pony Up returns to the main track after finishing a fast closing second on turf in the Jan. 6 Kitten’s Joy, in which he made an eight-wide sweep to close to within a neck of a victorious Flameaway. The son of Aikenite finished a close second on dirt in his debut at Gulfstream in July before breaking his maiden over Gulfstream Park West’s turf course in October and finishing second in the Pulpit on Gulfstream’s turf.

Javier Castellano has been named to ride Audible, while John Velazquez is slated to ride Pony Up.

Mississippi is slated to make his stakes debut in the Holy Bull after finishing a close second to Noble Indy, a highly regarded Pletcher-trained prospect, in an optional claiming allowance at Gulfstream Jan. 11. The Mark Casse-trained son of Pioneerof the Nile set the pace and put up a fight against undefeated Noble Indy before grudgingly yielding to finish less than a length behind the winner for the Magnier, Tabor, Smith, Oxley and Jooste partnership.

Julien Leparoux has the mount.