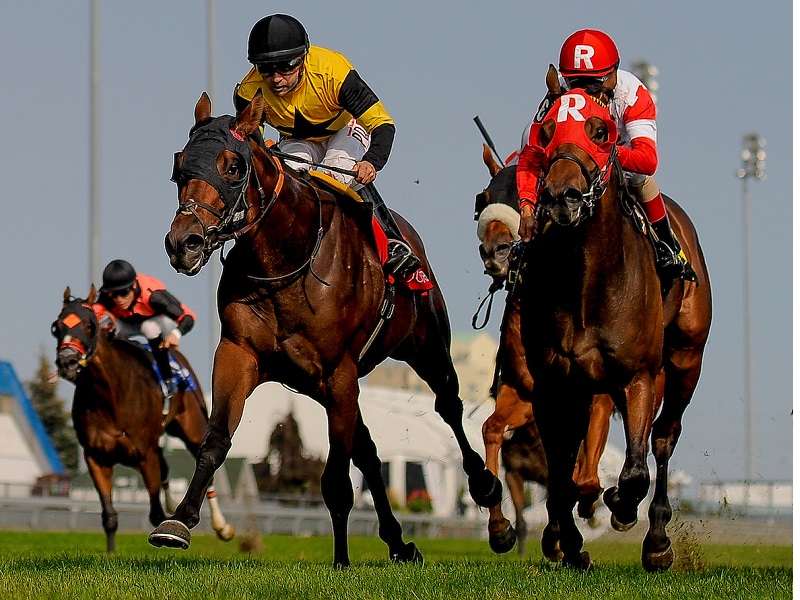 Motion takes a lot of pride in saddling all of his horses, but Untamed Domain, being a son of Animal Kingdom, brings back some pretty special memories for the man who saddled his sire for triumphs in the 2011 Kentucky Derby (G1) and the 2013 Dubai World Cup (G1).

“It would be even more fun it we could get him to the Derby,” said Motion, whose Grade 2 winner and Grade 1-placed colt has been installed as the 8-5 morning-line favorite in a field of 10 entered in the mile turf stakes. “To have one of his best horses, it’s quite gratifying. It’s quite gratifying for it to come full circle like that.”

The Dania Beach, one of five graded stakes for 3-year-olds on Saturday’s card headlined by the $350,000 Holy Bull (G2), could well lead Untamed Domain onto the Kentucky Derby trail, despite the fact that the one-mile stakes is scheduled to be run on turf.

”We had considering going in the Holy Bull, but when I started to weigh the pros and cons of coming off a layoff and running on the dirt for the first time and the small reward as far as Derby points, we just came to the decision that it would make sense that his next start would one of those (Derby prep) races that would have a little more at stake,” Motion said. “He’d have had a start and there wouldn’t be a question about his fitness.”

Untamed Domain distinguished himself as one of the country’s premier 2-year-olds on turf last year, concluding his 2017 campaign with a late-surging second-place finish under Jose Ortiz in the $1 million Breeders’ Cup Juvenile Turf (G1) at Del Mar Nov. 3.

“It was just a tough trip. There were a lot of horses. He’s a horse that comes off the pace and he’s not a very good gate horse. He usually breaks a step slow,” Motion said. “Jose made the decision along the back stretch – there were so many people stopping and starting down on the rail – to take him around. I’m sure it was the right thing to do but it meant he lost a lot of ground and that probably cost him the race. That’s no criticism of Jose.”

Prior to his runner-up finish behind Mendelssohn in the Breeders’ Cup Juvenile Turf, Untamed Domain captured the Summer Stakes (G2) at Woodbine after placing behind highly regarded Catholic Boy in the With Anticipation (G3) at Saratoga. He broke his maiden at Saratoga July 22 in his second career start.

Although Untamed Domain has never raced on dirt, Motion is hopeful that he will eventually prove to be as versatile as Animal Kingdom, who captured the Derby in his dirt debut and was successful on turf, synthetic and dirt during his career. Animal Kingdom’s offspring have shown ability on dirt and turf thus far.

Zayat Stables’ Gidu, who is rated second in the morning line at 3-1, will concede a big edge in experience to Untamed Domain. The Todd Pletcher-trained colt will start for just the third time Saturday after finishing second in his debut at Saratoga in August and capturing a five-furlong maiden race on turf by 3 ¼ lengths.

“He’s a very talented colt, stretching out for the first time,” Pletcher said. “We entered him in an allowance race last week that didn’t fill. He’s trained so well we decided to take a shot.”

John Velazquez has the return mount aboard the son of Frankel, who was purchased approximately $450,000 at the 2016 Arqana Deauville August sale.

Pletcher is also slated to saddle Calumet Farm’s Channel Cat, who broke his maiden by disqualification at Gulfstream in September and returned off a 3 ½-month layoff to finish third in an optional claiming allowance at Gulfstream Jan. 13.

“Channel Cat ran a winning type of race in the allowance race and decided we’d give it a try,” said Pletcher, who named Javier Castellano to ride the Calumet Farm homebred.

Grupo 7C Racing Stable’s Speed Franco, who defeated Channel Cat only to be disqualified in his Sept. 23 debut before breaking his maiden by six lengths in the Dec. 9 Pulpit Stakes, will seek to rebound from a sixth-place finish in the Kitten’s Joy, in which he was beaten by only a length.

Emisael Jaramillo has the return mount aboard the Gustavo Delgado-trained son of Declaration of War.

Stride Rite Racing Stable’s Renaisance Frolic, who finished a fast-closing third in the Kitten’s Joy; Stonestreet Stables’ and Aquis Farm’s Machtree, who captured an optional claiming allowance at Gulfstream last time out; Secure Investments and I C Racings, Cuestion de Tiempo, a two-time winner at Tampa; Kenneth English and Alan Braun’s Wildcat’s Legacy, a stakes winner trying turf for the first time; Magic Stables’ Cometin, an optional allowance winner at Gulfstream last time out; and Olympia Star’s Golden Dragon, who won twice on turf before finishing off the board in the Breeders’ Cup Juvenile (G1); round out the field.