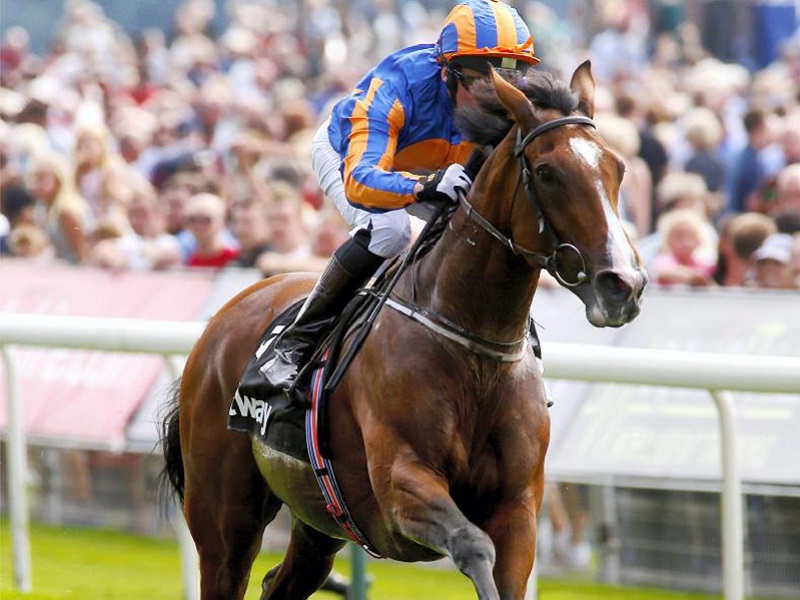 Saturday was Closing Day at Royal Ascot, and what a whirlwind five days it was!  It’s hard to believe that so many prestigious events could be crammed into a five day meet that hosted just 30 races, but the folks at Royal Ascot pulled it off.  At Xpressbet, we were honored to be the ‘Preferred US Betting Site of Royal Ascot.’  And we’re proud to have introduced more US racing fans and bettors to the meet than ever before.  Thanks for choosing to play the races with us!  Here’s a quick look back at Saturday’s card.

For the first time this meet at Royal Ascot, the card didn’t open with a graded stakes race.  Even still, though, it kind of felt like it did.  Coolmore’s sensational two-year-old filly, September (O’Brien/Moore), was the day’s biggest buzz horse and she did not disappoint in this seven-furlong turf dash.  The daughter of Deep Impact got off just a beat slowly, but raced midpack and exploded down the track late to reel in loose-on-the-lead frontrunner, Nyaleti (Johnston/Egan), who severely outran her 10/1 price.  Godolphin’s Masar, fancied at 3/1, had ever chance to run into second but simply couldn’t.  But in the end, all eyes were on September, who is already being booked as next year’s 1,000 Guineas favorite.  She paid $4.40 to Win and the Exacta returned $39.60.

Saturday’s races were marked by some significant longshots, and this was the first of them.  With 16 horses entered to run and with no heavy favorite on board, this year’s Wolferton had the makings of a scramble…and it delivered.  Longshots hit the board 1-2, with Snoano (Easterby/Allan) getting the neck-victory over Majeed (Simcock/Spencer.  With both longshots coming in, the payouts were massive.  Snoano paid $76.00 to Win and the Exacta was worth $2,428.80.  Anyone lucky enough to have the Trifecta turned their $2 bet into $54,124.90.

Graded stakes action returned in Race 3 in the form of the Group 2 Hardwicke, a 1 ½-mile test for some of the top distance runners in England.  As expected, favoritism went to The Queen’s runner, Dartmouth (Stoute/Moore), who won this race last year with Olivier Peslier in the irons.  The jockey change to leading Ascot rider, Ryan Moore, should help, right?  Not so fast.  Dartmouth got a dream trip, tracking frontrunner,  Dal Harraild (Haggas/Cosgrove), but he was unable to hold off the late charge from Coolmore’s Idaho (O’Brien/Heffernan), the horse Moore had chosen Dartmouth over.  Tough to be too hard on Moore for his choice – and his ride was certainly on point – but he wasn’t on the right horse Saturday.  Longshot Barsanti (Varian/Atzeni) rallied late to finish second.  The win is especially meaningful for Coolmore, as Idaho is a full-brother to Highland Reel, who was victorious in Wednesday’s Prince of Wales’s Stakes.  Idaho paid $11.40 to Win and the Exacta was worth a strong $232.40.

Saturday’s Group 1 feature was the Diamond Jubilee Stakes, a six-furlong dash down the stretch.  America’s hopes were with Long On Value (Mott/Rosario), who had finished a surprising 2nd, beaten in the shadow of the wire, in the Al Quoz Sprint at Meydan on Dubai World Cup night.  Could he replicate his kick at Royal Ascot in the race that Wesley Ward surprisingly won with Undrafted in 2015?  Turns out, no.  Long On Value finished 12th of 19 runners.  The showdown was set for a remarkable finish, however, as Limato (Candy/Moore), The Tin Man (Fanshawe/Queally) and Tasleet (Haggas/Crowley) rocketed away from the field in the final furlong.  Each had times where they appeared to be the likeliest winner – the biggest move coming from Tasleet, who appeared the winner until bumping with the leader – but ultimately it was The Tin Man getting the job done by a neck.  It was less than a length to Limato in third.  The Tin Man paid $10.40 for the Win and the Exacta returned $84.40.

With the graded stakes action in the books, all that was left was more big fields and, surprise…more longshots!  In the Wokingham, Out Do got the job done (O’Meara/Tudthorpe) got the job done at a big price, hitting the wire just ahead of Godolphin’s Steady Pace (bin Suroor/Gordon).

The Meet Finale was the Queen Alexandra, run at more than 2 ½-miles.  The favorite?  Thomas Hobson (Mullins/Harley).  You may remember him, actually.  He won the Ascot Stakes as the favorite on opening day.  Nearly five miles of racing in five days?  Crazy, right?  Actually no.  Thomas Hobson ran great Saturday, finishing second, beaten just 1 ¼-lengths by the winner, Oriental Fox (Johnston/Fanning), who paid $23.20 for the Win, with the Exacta returning $97.20.

That’s it for Royal Ascot.  We hope you had as much fun betting the races as we had bringing them to your computer screen or mobile device.  We’ll see you next year for more Royal Ascot racing – same time, same place!