Castellano Brothers Team for a Win Sunday at Gulfstream 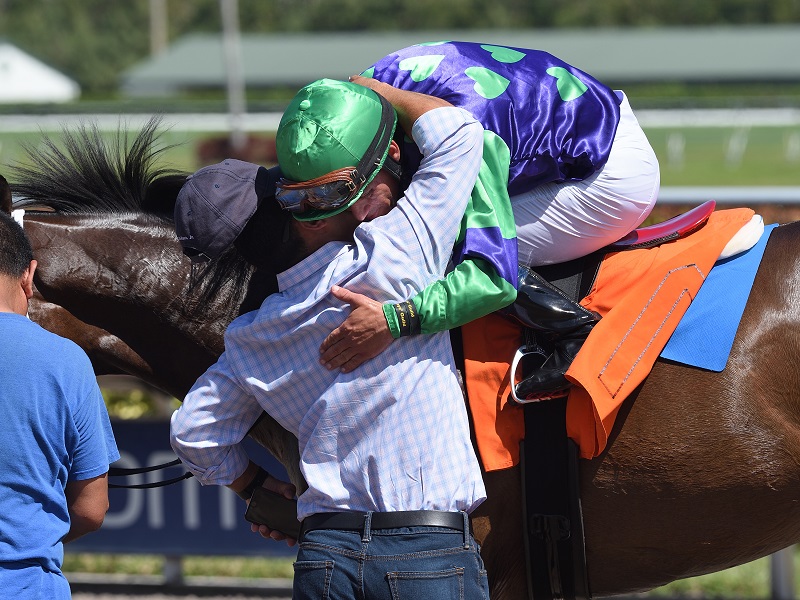 HALLANDALE BEACH, FL – Javier Castellano scored one of the most emotional victories of his Hall of Fame career aboard Nothins Free in Sunday’s third race at Gulfstream Park. The superstar jockey has won infinitely more prestigious races than the $12,500 claiming race for 3-year-old maiden fillies but never has he had the opportunity to celebrate a victory by a horse trained by his brother, Abel Castellano Jr.

Upon returning to the winner’s circle, Javier, who had just notched Career Win No. 4849, was greeted by Abel on the track to celebrate the victory with a High-5 and a brotherly embrace before gathering for the family picture. A winner of more 1849 races as a jockey before turning to training last year, Abel saddled his sixth winner from 22 starters and his first at Gulfstream Park, where he got his start as a jockey in 2000 and took out his trainer’s license last winter.

“This is very special. We started here in South Florida 20 years ago. We’ve both won a lot of races here,” Javier said. “I’m proud of my brother to have success as a trainer. He’s worked very hard. I feel a lot of pressure – don’t get me wrong – riding for him. It’s very special to ride for him. Thank God for this winner. Hopefully, there will be many more.”

The Castellano Brothers had finished sixth with maiden claimer Kid Mac Cool in Thursday’s 11th with Abel’s first starter during the Championship Meet. Nothins Free was in total control throughout in Sunday’s third race, scoring a 3 ½-length front-running victory as the 7-10 favorite in the six-furlong sprint.

“Thanks God everything worked out so good,” said 34-year-old younger brother of the 40-year-old Hall of Famer. “This is a new chapter in my life. I hope to do good because I love horses. I love the game. I grew up in the business. I won a lot of races. I want thank Imaginary Stables’ John (Guarnere) for letting me prove I can do good with his horses and I want to thank my brother. This is special for me and my brother.”

Abel, who currently trains a stable of four horses, three for Imaginary Stable and one for Glenn Fagan, hopes to attract new owners and horses.

“I’m looking to expand my stable,” said Abel, who saddled his first five winners at Delaware Park last year. ‘and I’m hoping my brother can ride them all.”