Santa Anita's Riding Title Going Down to the Wire 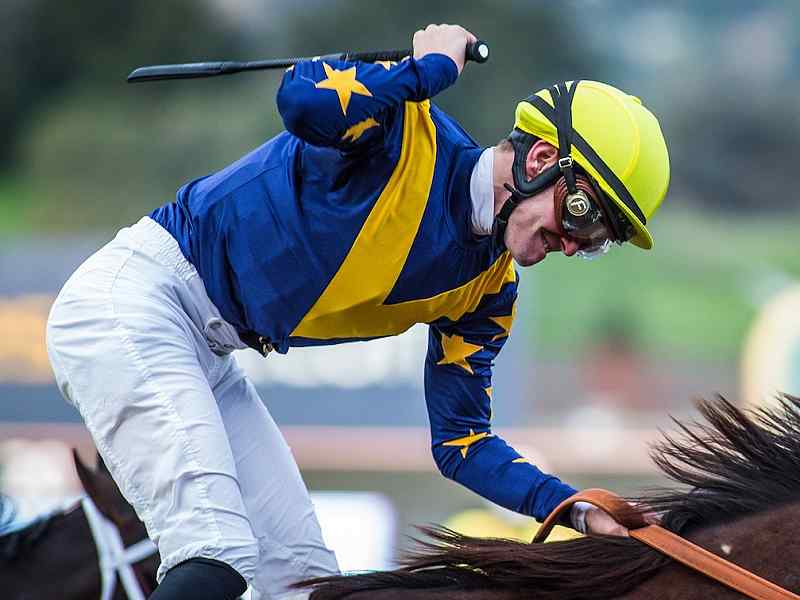 Rounding out the top four are Joe Talamo, with 32 wins and Rafael Bejarano, who has 31. Although Bejarano, will be sidelined when closing week begins on Friday due to a riding suspension, he’ll be back in action for the remainder of the week beginning on Saturday.

With an eight-race card on tap this Friday, here’s what’s in store for Santa Anita’s top jockeys, with the exception of Bejarano:

FLAVIEN PRAT (35 wins) — He’s named to ride five horses, beginning with Tiz My Love in Friday’s second race. Trained by Jerry Hollendorfer, she’ll break from the rail in a six-horse maiden special weight at one mile for fillies mares. Prat will then come back in race three aboard the Neil French-trained Comealongwithme, a 6-year-old mare who drew post seven in a $32,000 claimer at 6 ½ furlongs down the hillside turf course. He’ll then ride Best Two Minutes for trainer Jack Carava in the fourth race, breaking from post two in a $20,000 claimer at 6 ½ furlongs. Prat’s next assignment comes in race six, aboard Hollendorfer’s Elwood J, who drew post seven in a one mile turf allowance. Prat’s final mount for Friday is aboard trainer Gary Stute’s Lethal Legacy, who drew post eight in a Cal-Bred maiden $50,000 claimer for fillies and mares at one mile on turf.

EVIN ROMAN (34 wins) — This red-hot apprentice is named on six horses Friday, beginning with race one aboard trainer Vladimir Cerin’s Hard Arch, who drew post six in a 1 1/16 mile maiden $40,000 claimer. Roman will come back in race two aboard Life of Illusion, who is trained by Steve Miyadi and will break from post three in a one mile maiden special weight for fillies and mares. Roman rides Not Too Shiny from post five for trainer Eric Kruljac in race three, a maiden $32,000 claimer for fillies and mares at 6 ½ furlongs down the hillside turf course. He’ll then ride Out of Patience for trainer Jorge Periban in race four, as he’ll break from post three in a $20,000 claimer at 6 ½ furlongs. Roman next rides Bird Is The Word, who is trained by G.F. Almeida and will break from post nine in a one mile turf allowance. Roman’s final scheduled mount for Friday is aboard Lady Cloud, who drew post eight in a $25,000 claimer for fillies and mares at six furlongs.

JOE TALAMO (32 wins) — “Cousin Joe” has four scheduled mounts for Friday, beginning with Pica in race three for trainer Eddie Truman. She’ll break from the rail in a $32,000 claimer for fillies and mares at 6 ½ furlongs down the hillside turf. Talamo is then idle until race six, when he rides trainer Bill Spawr’s Kona Dreams, who drew post 10 in a one mile turf allowance for 3-year-olds and up. Talamo then rides Yellow Bonnet in race seven for Mark Glatt. She’ll break from post seven in a six furlong dash for $25,000 claiming fillies and mares. Talamo’s final mount is in the eighth race aboard trainer and father-in-law Ron Ellis’ Christiana’s Song, who will break from post two in a maiden $50,000 claiming event for Cal-bred fillies and mares at a mile on turf.