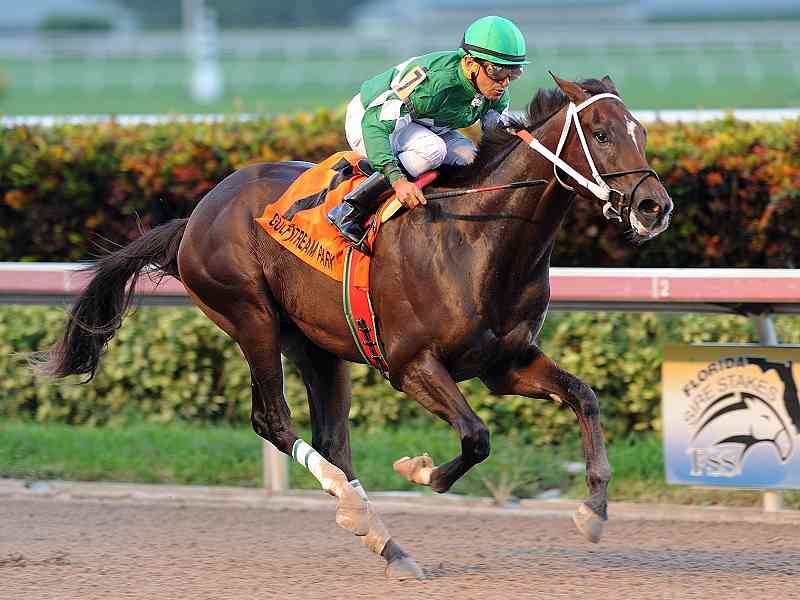 HALLANDALE BEACH, FL – After launching his career last year with five-straight victories, including a sweep of the Florida Sire Stakes series, Three Rules is scheduled to seek his first victory of the 2017 season in the $150,000 Carry Back (G3) on Saturday’s Summit of Speed program at Gulfstream Park.

Although Three Rules is winless this year, trainer Jose Pinchin expects the son of Gone Astray to be at his best in the seven-furlong stakes for 3-year-olds that will highlight Saturday’s $1 million seven-stakes event, along with ‘Win & You’re In’ Breeders’ Cup races the $250,000 Princess Rooney (G2) and the $250,000 Smile Sprint (G3).

“He’s as good as ever,” said Pinchin, who trains the Florida-bred colt for Shade Three Thoroughbreds, Tom Fitzgerald and Geoff Roy. “He’s been knocking heads with the best horses this year”

Three Rules, who sustained his first career loss in the Breeders’ Cup Juvenile (G1) at Santa Anita, kicked off his 3-year-old campaign with a second-place finish in the seven-furlong Swale (G2) Feb. 4 at Gulfstream, three-quarters of a length behind Favorable Outcome. The homebred colt went on to finish third behind multiple graded-stakes winners Gunnevera and Practical Joe in the 1 1/16-mile Fountain of Youth (G2) March 4 and fifth in the 1 1/8-mile Florida Derby (G1) April 1. The first three finishers in Gulfstream’s signature race for 3-year-olds, Always Dreaming, State of Honor and Gunnevera went on to run in the Kentucky Derby (G1), with Always Dreaming scoring by 2 ¾ lengths in the first leg of the Triple Crown.

After a brief freshening, Three Rules was favored in the six-furlong Chick Lang Stakes at Pimlico on the Preakness Stakes (G1) undercard but finished third behind Recruiting Ready and Aquamarine after breaking from the rail post position on a track that favored outside runners and having to be steadied in traffic on the turn.

Three Rules has breezed three times, including a bullet clocking of 59.45 seconds June 17, over the Gulfstream Park surface since his last start.

Jockey Cornelio Velasquez, who was aboard Three Rules for his five straight victories last year, is set for a return to the saddle for the first time since finishing second in the Swale.

Three Rules, who is scheduled to meet 10 other 3-year-olds in the Carry Back, captured the seven-furlong Affirmed in the middle of his Florida Sire Stakes sweep.

“I think seven-eighths is his ideal distance,” Pinchin said. “He has a high cruising speed – seventh-eighths should be his best journey.”

Trainer Todd Pletcher is scheduled to be represented by a pair of less experienced colts than Three Rules in the Carry Back, in which Benefactor and Blind Ambition will each seek to become a stakes winner.

Benefactor, who graduated in his second lifetime start by two lengths at Gulfstream May 13, is coming off a second-place finish in the Ocala Flame overnight handicap June 9 for WinStar Farm, China Horse Club and SF Racing Group. Gaineway Farm’s Blind Ambition broke his maiden in his third lifetime start April 29 over the main track before capturing an entry-level optional claiming allowance on turf May 28.

“They’re both well-bred horses and good-looking horses, but we just weren’t positive what their preferred surface would be,” Pletcher said. “With Benefactor being a More Than Ready we thought he was one that could potentially go dirt or turf and same thing with Blind Ambition being a son of Tapit. It seemed like he could go either way, especially being out of Starfish Bay. That’s why we ran him on the grass last time and it seemed like he handled it well, but I thought he was also impressive breaking his maiden going seven-eighths on the dirt.”

Sweetontheladies, a multiple-stakes winner, is set for his graded-stakes debut in the Carry Back. Owned by the Four Horsemen Racing Stable and Lady Lindsay Racing Stables, the son of Twirling Candy has won three of four starts on the main track at Gulfstream, including a victorious return from a four-month layoff in the off-the-turf Crest River overnight handicap June 4.

The Henry Collazo-trained 3-year-old had previously finished fourth in the Mucho Macho Man behind Sonic Mule, State of Honor and Talk Logistics Jan. 4.

“He didn’t get a good break and he was in with some really good horses,” Collazo said. “It wasn’t on even terms. At that time he wasn’t as good of a horse to overcome those adversities and still be able to run down those quality of horses. With a better start, he would have been closer.”

Reeves Thoroughbred Racing’s Classic Rock, who finished off the board in the Woody Stephens (G2) at Belmont June 10, is set for a return to action at Gulfstream, where he notched three straight victories, including a four-length score in the Roar Stakes April 22. Luca Panici has been named to ride the Kathy Ritvo-trained son of McClean’s Music.

Ken and Sarah Ramsey’s Hunka Burning Love, a stakes-placed son of Into Mischief who captured a second-level allowance at Churchill Downs June 3; Marco Thoroughbreds Mo Cash, who won his first three starts, including two stakes, before finishing second in the Big Drama at Gulfstream May20; and Span Investments and Rohan Crichton’s Crocodile Charlie, who defeated Benefactor in the Ocala Flame last time out; are among the serious Carry Back contenders.

Aberdeen Way, Gregory Sun and Mr. Atila round out the field.

R Angel Katelyn is scheduled to seek her sixth stakes victory in the $75,000 Azalea on Saturday’s Summit of Speed card at Gulfstream Park. The Gerald Bennett-trained daughter of High Cotton is scheduled to clash with nine rivals in the seven-furlong stakes event for 3-year-old fillies.

Owned by Averill Racing, CCF Racing Stable and K Lauren Racing, R Angel Katelyn has been pace-involved in all of her stakes victories, demonstrating the ability to set or press the pace.

“She just has natural speed. She has a great mind. Nothing ever seems to upset her,” Bennett said. “She has great tactical speed, especially when she draws outside. She just sits there and see how the race unfolds. If you ask her, she’ll go.”

The Florida-bred filly was unable to employ her winning tactics in her graded-stakes debut after drawing the rail post position for the Adena Springs Miss Preakness (G3) at Pimlico May 19. Away a little slow from her disadvantage post, R Miss Katelyn was trapped on a dead rail and finished sixth.

“It was not the place to be. You’d have to break and use her to get her off the rail,” Bennett said.

R Angel Katelyn returned to her winning ways in her Gulfstream debut June 7, pressing the pace before edging away to a half-length victory in the Liza Jane overnight handicap. Edgard Zayas has the return mount.

Darsan Inc.’s Who’s The Lady is set for a return to Gulfstream Park after a couple of subpar showings out of town. The Kathleen O’Connell trained filly had won her first four starts, including the Any Limit Stakes March 28, before finishing 11th in the Miss Preakness and eighth in the Crank It Up at Monmouth.

Bluestone Thoroughbreds’ Brahms Cat, who finished an even third behind R Angel Katelyn in the Liza Jane, returns in the Azalea. The Larry Bates-trained daughter of Wildcat Heir finished third behind Tequilita in the seven-furlong Forward Gal (G2) during the Championship Meet. Javier Castellano has the mount.

Pinnacle Racing Stable’s Sweet Tooth Haven, who returned from a long layoff to win an entry-level allowance; and Magic Stable’s Lirica, a stakes winner at Gulfstream, are also entered in the Azalea.

“She’s just had the one race and we just felt like it’s kind of an ambitious move, but she’s there, she’s training well and it’s an opportunity to maybe get some black type for her,” Pletcher said. “We feel like she could improve after not getting away great first time out and that hopefully there’s a move forward in her. The distance should be no problem.”

True Motion, Hello Juliet, Worth Avenue and Fergilicious round out the field.