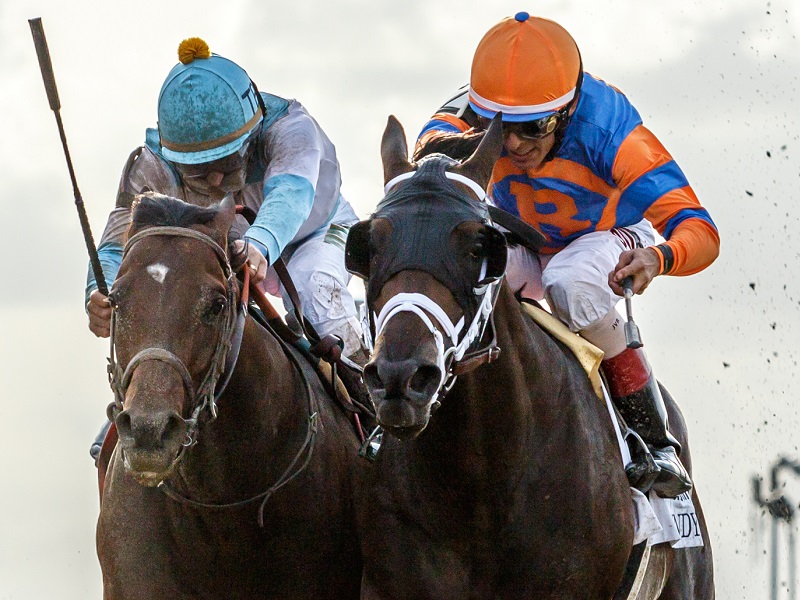 NEW ORLEANS (March 24, 2018) – In the final local prep on Churchill Downs’ Road To The Kentucky Derby, Noble Indy punched his ticket towards the Grade I $2 million Kentucky Derby Presented by Woodford Reserve when turning in a gutsy performance in the Gr. II $1 million Louisiana Derby, which saw its 105th edition on Saturday afternoon.

Owned by Repole Stable and WinStar Farm LLC, the 3-year-old son of Take Charge Indy was sent to the Fair Grounds Race Course & Slots for the Gr. II Risen Star Stakes in his previous effort, where he finished third behind Bravazo and Snapper Sinclair but turned the tables on his former foes in the Louisiana Derby.

In the early stages of the race, Hall of Fame jockey John Velazquez let Noble Indy sit just off of 99-1 pacesetter Marmello, who led the Louisiana Derby field in opening fractions of 22.97 and 46.64. With over half of the journey covered, Marmello began to give way as Noble Indy then took command with Givemeaminit two lengths behind in second. At the top of the stretch it appeared as if Noble Indy had the race lost as he was narrowly passed up by Lone Sailor and My Boy Jack to the outside, but he dug in the whole way down the stretch and won by a neck over Lone Sailor in a time of 1:50.28.

Noble Indy gave trainer Todd Pletcher his fourth victory in the Louisiana Derby. He won previous editions with Circular Quay (2007), Mission Impazible (2010) and Revolutionary (2013), the latter of which also was owned by WinStar Farm. Velazquez and Pletcher teamed up with Circular Quay.

“I think the blinkers had him more focused,” Pletcher said. “I was a little concerned early on, he was a little too head strong. Johnny made a good tactical move letting the pace setter go and then getting outside of the horse. He fought back hard, finished up well and galloped out with enthusiasm. This race was a big step in the right direction. I was pleased with the way he conducted himself. He seems to be maturing as he gets more experience.”

Runner-up Lone Sailor earned 40 points on the Road To The Kentucky Derby with such an effort in the Louisiana Derby elevating him to No. 8 on the Leaderboard with a total of 42 points. Third-place finisher My Boy Jack earned 20 from the Louisiana Derby and now sits at No. 12 on the Leaderboard with 32 points. He secured 10 from a victory in Oaklawn Park’s Gr. III Southwest Stakes and two with a third-place effort in the Gr. III Sham Stakes at Santa Anita.

With a victory in the Louisiana Derby, Noble Indy lies atop the Kentucky Derby Leaderboard with 110 points. He earned $600,000 from the win and has secured $691,600 in career earnings. In four career starts, he has found the winners circle three times with his only loss taking place in the Risen Star Stakes last month. He broke his maiden at Gulfstream Park by 8¾ lengths and returned to victory at the South Florida oval in a first level allowance race, which he won by three-quarters of a length.

“I’m not going to get spiritual about this thing, but I’ll tell you this – I really felt Mr. Benson was with us today. This guy reminds me a lot of Mylute, who came from off the pace and just got beat a neck in the Louisiana Derby and that’s what happened to day with Lone Sailor. We’ve got the points now. I know the group wants to go to the Kentucky Derby and I stand behind that as well so if he’s happy then we’re going to go.

“I look forward to seeing Mrs. Benson and I want her to see the look in my eye because it’s the same as all the other citizens of New Orleans. We loved him, we love his legacy, and I want her to know how important this was to me. Everybody feels like they’ve got a connection to Tom Benson if they’re part of this city. He’s one of us and I’m so proud and honored to be part of it.

“We had a little traffic on the turn. I’m not going to knock it; that’s horseracing. We got outrun down the lane. We engaged the winner and he fought us to the wire. We just couldn’t put him away.

“This is a really big day in my life. To win the Oaks, which I’ve never won, and to barely get beat in the Louisiana Derby, all in the same day, it’s more than I could’ve hoped for.”

“He picked up and he sprinted away. He kind of got there maybe a little too soon. When they came to him on each side, he stretched his neck out and ran again.

“I was galloping. I moved too soon. When I asked him to go I said, ‘he can’t lose, there’s no reason to be cute.’ He went so fast from last to first that he couldn’t sustain that kick and the last hundred (yards) he faltered a little bit. I think that’s my fault, 100%.”

“We got to the fence early and saved ground, which is exactly what we wanted to do. Unfortunately we had to go six- or seven-wide and that was probably the difference. I actually thought we were going to win. (Trainer) Keith (Desormeaux) had said that if he needed the points he’d think about wheeling back in the Arkansas Derby but we’ll wait to see how he comes out and what Keith wants to do. In Keith we trust.”

“He warmed up good, got away from there good. We were going fast and I eased into the three-path going into the first turn and all of a sudden he wanted to go straight. I didn’t make the turn, I had a steering malfunction for whatever reason. I just don’t know, but he was lugging out with me the entire trip and I had both hands on the inside rein, literally, trying to hold him in. I was breaking his momentum and he was fighting me and I was just trying to keep him on track but wasn’t really able to accomplish that. I can’t explain why. He was sound after the race, pulled up good, but he was mad.

“I don’t know what happened, I really don’t. Maybe they’ll find some cuts in his mouth or a bad tooth or something. That’s what he acted like, like he was really fighting the bit, and it all happened at once. I’ll talk with the Coach when I’m done here and he’ll figure it out but it was very disappointing.”