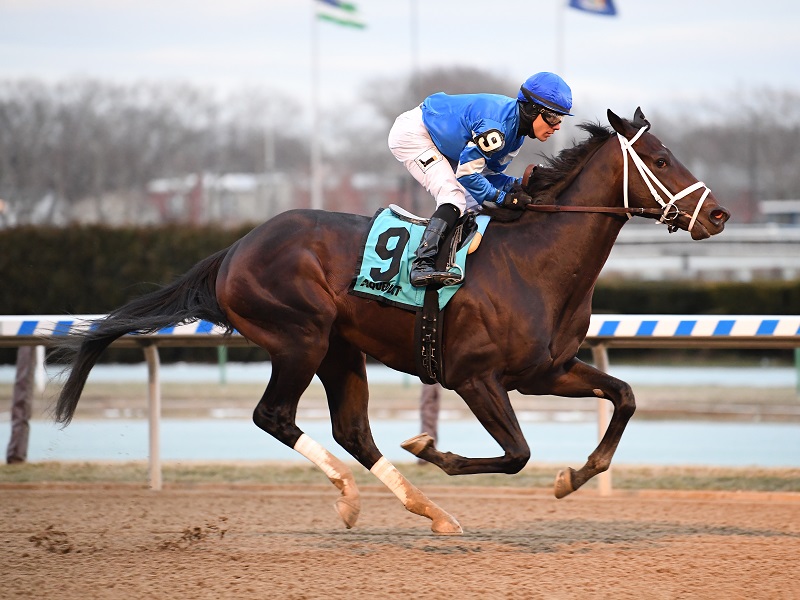 OZONE PARK, N.Y. - The Road to the Kentucky Derby is a bit shorter following the conclusion of Saturday's Grade 3, $300,000 Gotham at Aqueduct Racetrack, as Godolphin's homebred colt Enticed closed outside to win the mile race by 2 ¾ lengths in a final time of 1:38.24.

Making his fifth career start, the son of Medaglia d'Oro drew the outside post among the field of nine, which gave trainer Kiaran McLaughlin and jockey Junior Alvarado the option of laying outside while letting the rest sort themselves out to their inside. All that was needed was a clean break and a clear path, McLaughlin had said before the race, and that's exactly what Enticed delivered.

From the gate, Maryland shipper Old Time Revival set the early pace while Cove Blue, one of two sent by trainer Dale Romans, sat close in company with Nine Route to his outside. The trio led the way while Enticed sat patiently to the outside under Alvarado, while 9-5 favorite Free Drop Billy and jockey Dylan Davis settled well behind with only Whereshetoldmetogo beat through the early going. After an opening quarter-mile in 23.14 seconds, Free Drop Billy began a steady advance with Firenze Fire, the 5-2 second wagering choice, ahead of him in sixth.

Old Time Revival took the field through a half-mile in 46.43 and continued to look strong under Jeremy Rose as Enticed began to make a run. Into the stretch, Enticed came outside, forcing Old Time Revival to work harder and, with three-quarters going in 1:11.77, the 4 ½-length margin held by the leader was diminished, as Enticed drew clear to the wire under Alvarado.

"He broke good," Alvarado said. "I wanted to make sure to be a little close, but I felt the first part of the race, we were going a little fast for the way the track was playing today. I wanted to make sure I kept him clear on the outside. I didn't want to get him in trouble at all because he's a horse that takes a while to get going.

"As soon as we turned for home, I knew it was just a matter of time when he switched leads for him to give me that next gear," he continued. "As soon as he started moving along again, he was much the best horse today."

Free Drop Billy, in search of his second graded stakes victory from seven starts came up short with his late effort, but it's just another part of the building process, according to trainer Dale Romans. With his third in the Gotham, the Union Rags colt added another 10 Kentucky Derby qualifying points to bring his total to 24.

"We got 10 points today," Romans said. "If he belongs, we'll have enough points to get there. Right now, that should be enough. He still has to come back and run well next time. I think he ran a clean trip. There was some good things to see, but I wanted him to win. I thought he would win.

"He ran in the end away from the horse coming for fourth down the lane. That was good and he kept on going. Looked like he galloped out strong. Two turns would probably be better. We'll take him back to Florida and probably go to the [Grade 1] Bluegrass [April 7]. He's already a Grade 1 winner there, but we'll go from there. We're disappointed, but not discouraged."

Runner-up Old Time Revival, a son of Brethren who was sent off at 35-1, was vanned up from Laurel Park on Friday morning bringing with him just a maiden victory and a second-place finish in the Miracle Wood after he was caught to miss by a neck at the wire. His performance impressed his trainer Kenneth Decker.

"He ran a nice race, he's learning and he's getting better and better every time," Decker said. We came back a little quick out of the last race, it was three weeks. He ran a nice race and we'll see how he comes out of it and go from there.

"That was his race. You have to let him run his race and let him get out there and get comfortable. We tried to rate him a couple of races back and he just showed us that he can get out there and get his pace. He's going to keep getting better and we'll just keep stretching him out. He handles all the challenges and he's just been a nice colt to work with."

The Gotham was Enticed's second graded stakes victory after he captured the Grade 2 Kentucky Jockey Club at Keeneland by a head. That win closed out his 2-year-old campaign after he broke his maiden in the mud at Saratoga and sandwiched a hard-fought third in the Grade 1 Champagne between the two victories.

Enticed began 2018 with a tiring fourth-place finish in the Grade 2 Holy Bull, but his Gotham victory awarded him 50 points as part of the 50-20-10-5 Derby point system, and will send the earner of $410,680 to Churchill Downs for a start in the Kentucky Derby on May 5. The plan now for McLaughlin and his team will now be whether to ship back to McLaughlin's Florida training base at Palm Meadows in preparation for a possible start in the Grade 2, $750,000 Wood Memorial on April 7 and then on to the first Saturday in May.