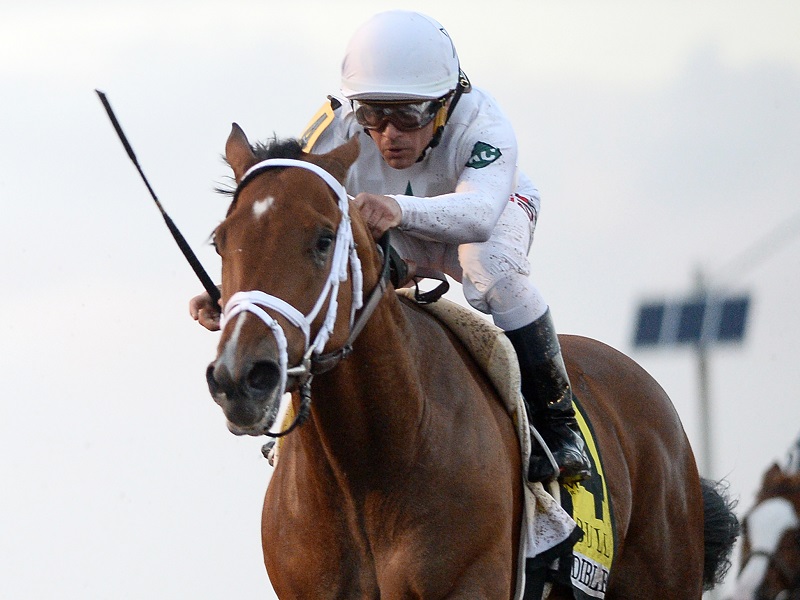 Co-owner Elliott Walden, President/CEO WinStar Farm (Audible, Post 8, 9-5): “With only nine horses in the race, it’s fine. Obviously there was some discussion about the 11 or the 12 going a mile and an eighth here at Gulfstream Park, but he doesn’t have to worry about that so I think everything else is good.”

“He’s doing very well. He looks happy. We were up at Palm Beach Downs yesterday and he’s very bright, very alert. He’s an average work horse but he’s been that way his whole life. The other day he worked a half in 49 and one and I think [trainer] Todd [Pletcher] worked 30 horses a half-mile at Palm Beach that day, and he was third of 30. We were very pleased with how he worked and looking forward to Saturday.”

Trainer Dale Romans (Promises Fulfilled, Post 4, 3-1; Storm Runner, Post 5, 20-1): “They’re right next to each other in a perfect spot. I just like to have horses on both sides of my horses in the gate, that’s the key for me. I’m happy with how they’re both doing going into the race. I wouldn’t run them if I wasn’t.”

Trainer Jonathan Thomas (Catholic Boy, Post 6, 7-2): “I think we’re OK. I would have been worried if we’d have drawn any wider. Anything from where we were to inside I thought would be advantageous. All in all I think we’re OK.”

“He’s really settled in well here. I’m glad we came when we did. He had a really nice breeze over the track and came out of it well, so we’re happy.”

“It’s been a blessing to have the clients and support we have and ultimately to have the horses we get to work with. It’s why we do the things we do.”

Trainer Mark Hennig (Strike Power, Post 1, 4-1): “I think the post suits him well. He’s got the right style to be in the one hole. He’s certainly not going to get outrun by too many of them going into the turn so he’ll sort out a good trip from there. I didn’t want to be on the outside, because then we would have been forced to either sit or really gun so I think the post is perfect for him.”

“If you’d have asked me when we were stretching from the Swale to the Fountain of Youth, I was probably a lot more concerned than I am today. I’m less concerned today than I was when they finished the Fountain of Youth because of the way the horse has trained in the last few weeks. I think he’s growing, too. He may have had the look of more of a sprinter early on but he is changing. He’s an April 24 foal and sometimes in the spring of the year with these 3-year-olds, magical things can happen.”

Trainer Mark Casse (Mississippi, Post 9, 12-1): “The outside post is never a good post at Gulfstream, that’s for sure, not going two turns. The good news the favorite is right next to us. He’s training extremely well. You need some breaks and you need some luck, but he’s doing very well.”