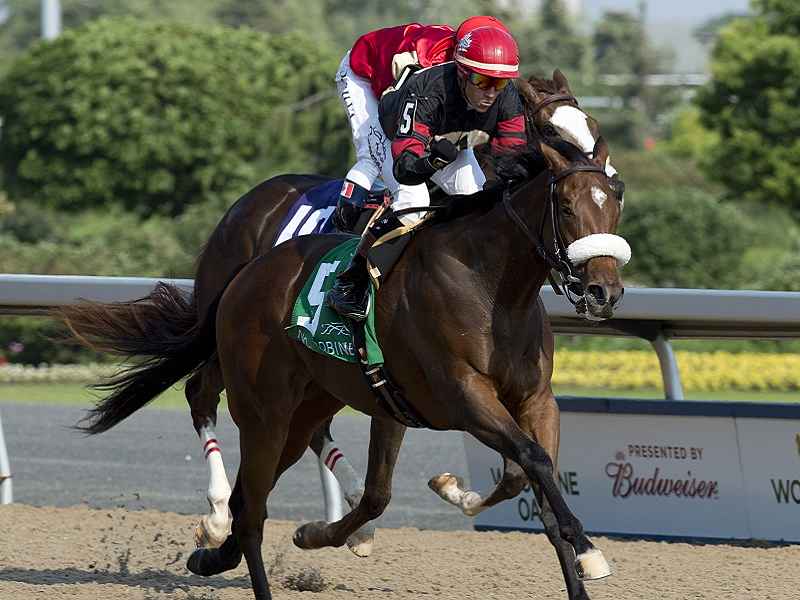 Sunday is Queen’s Plate Day at Woodbine, and that’s a pretty big deal for everyone involved.  Not only are they hosting the $1 Million Queen’s Plate, Canada’s version of the Kentucky Derby, but they’ve also got four other graded stakes races on the card and $600,000 in Guaranteed Wagers, including a $300,000 Guaranteed Late Pick 4 (Races 10 – 13).  Hit that to Split 1 Million XB Rewards Points.

First post at Woodbine is 12:00PM ET on Sunday.  Here are my picks for the stakes races, as well as my Late Pick 4 and Late Pick 5 tickets.

The first stakes race on the card is the Grade 2 Highlander, a 6-furlong turf dash for older horses that serves as a ‘Win and You’re In’ event for November’s Breeders’ Cup Turf Sprint at Del Mar.  The likely favorite is Brad Cox’s Green Mask (2/1), a 6-time winner who finished second in this race last year, beaten just a neck.  Problem is, he’s just 1-for-4 this year, with two losses as the favorite.  Maybe he just lacks that last final kick?  My pick is the second-choice, Calgary Cat (5/2), who is 2-for-6 at Woodbine and seems to be rounding back into top form.

To me, this race goes through Tower of Texas (2/1).  I couldn’t help but be very impressed with this son of Street Sense when he won his seasonal debut in the Grade 2 Connaught Cup on June 3.  He’s not necessarily the type of horse that is built to win off long layoffs (especially as a six-year-old) so having him win first back is key.  I expect him to move forward this go around, and keep in mind he’s 4-1-1-1 the last three times he ran a mile at Woodbine, including a win in this race in 2015 and a second behind Tepin in last year’s Woodbine Mile.

The Singspiel is a 1 1/2-mile turf test for older horses, with the favorite, Reporting Star (2/1), being a bet-against in my eyes.  He’s dropped nine straight races and is 0-for-5 in races this long.  Second choice, Bullards Alley (3/1), is also a horse I’m taking a stand against.  He’s dropped all six of his 2017 starts (including 12 straight defeats dating to last May) and just isn’t a horse to trust.  On the other hand, Bangkok is the ‘now’ horse (7/2).  An allowance runner for much of his career, he was a 17/1 outsider when he won the Grade 3 Valedictory Stakes on the main track last fall, but he followed that up with a win in a 1 1/4-mile allowance race here in June.  That was probably the best race he’s ever run and with a horse in this good of form, I can’t help but get on the bandwagon.  Curlins Pride (8/1) is a similar type that ran well in a comeback race.  Keep an eye on him.

For most, myself included, this is a two-horse race between Chad Brown’s Rainha Da Bateria (2/1) and Bill Mott’s Suffused (8/5).  Both ran well at Woodbine last year and each has serious credentials to win Saturday.  I give the slight edge to ‘Rainha.  I loved her comeback race at Belmont and think she’s a slightly sharper horse than Suffused, who has dropped two straight decisions after winning 4-of-6 from June to March.  Woodbine based Starship Jubilee (5/1) is worth a look.  She’s won 4-striaght since being claimed and won the Grade 2 Nassau last out.

The marquee race of the day is the $1 Million Queen’s Plate for three-year-olds foaled in Canada, with favoritism going to the filly, Holy Helena (3/1).  She won the Woodbine Oaks on June 11, but I have a hard time playing her to win this time around.  She’ll be in the mix, but I don’t view her as a slam dunk.  A slightly better alternative may be Bill Mott’s Channel Maker (4/1) who breaks from the inside and retains local rider, Rafael Hernandez.  He was second last out in the Grade 3 Marine behind Souper Tapit, but that horse was ineligible to run here because he was not foaled in Canada.  Mark Casse’s best hope is King and His Court (5/1), while his ‘other’ horse, State of Honor (8/1), who finished 19th in the Kentucky Derby, is just 1-for-12 in his career.  Aurora Way has started just once, but he broke his maiden by 4-lengths and picks up the services of Julien Leparoux, who won this race last year.  Watch Me Strut (30/1) is a deep-closing bomb who could run into the picture late.