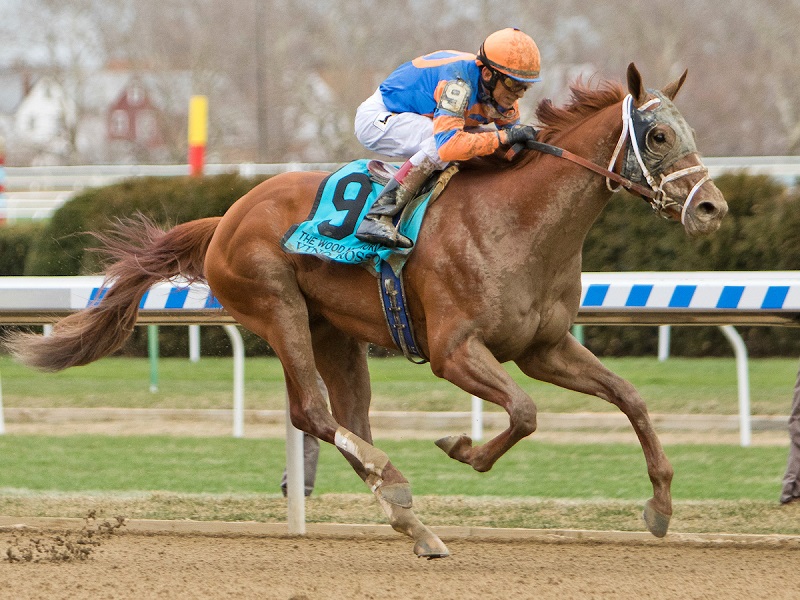 OZONE PARK, N.Y. - Repole Stable and St. Elias Stable's Vino Rosso got his breakthrough victory on Saturday at Aqueduct Racetrack, surging from off the pace to outkick Grade 3 Gotham winner Enticed to win the 94th running of the Grade 2, $1 million Wood Memorial presented by NYRA Bets by three lengths and pick up 100 points, securing a bid in the Kentucky Derby.

It was the first stakes victory in three tries for Vino Rosso, who finished a close third in the Grade 3 Sam F. Davis and was fourth in the Grade 2 Tampa Bay Derby, where he added blinkers for the first time and stalked the early pace before dropping back under Hall of Fame jockey John Velazquez.

In the 1 1/8-mile Wood Memorial, Vino Rosso settled in mid-pack through the early going as Gotham runner-up Old Time Revival seized the early lead in the field of nine. Old Time Revival drew off up the backstretch by six lengths or more ahead of Enticed, the 6-5 favorite, and California import Restoring Hope through an opening quarter-mile in 22.96 seconds and a half in 46.68.

Vino Rosso, a chestnut colt by Curlin, began his march toward the leaders in the far turn as Old Time Revival relinquished control to Enticed and Restoring Hope after six furlongs in 1:11.44. Turning for home, Restoring Hope backed off slightly, leaving Vino Rosso and Enticed, ridden by Junior Alvarado, to lock horns in heated stretch duel. Vino Rosso shook clear in the final strides to complete the route in 1:49.79.

There was a stewards' inquiry and a jockey's objection lodged by Alvarado into the stretch run of the race, but no action was taken.

"I got close to him and he was coming out," said Velazquez. "So, I made my horse switch leads and when he switched, I leaned on him a little bit, and then he pushed me out and my horse went right back on him. That's what happened. I got him easy, anyway. He was holding his ground out and I was holding him back in. He was the horse to beat and I wasn't going to give him a chance."

Vino Rosso was a $410,000 yearling purchase at the 2016 Keeneland September sale and has bankrolled $620,500 in five career starts, including back-to-back maiden and optional claimer wins last fall.

"I was a little worried right at the start, because his hind-end kind of slipped out leaving the gate, and it looked [like] it took him about a hundred yards to get engaged," said Pletcher, who also won the Wood Memorial with Eskendereya (2010), Gemologist (2012), Verrazano (2013), and Outwork (2016).

"He was a little farther back than I thought he would be, but when you take the pacesetter out, he really was close to the contenders," he continued. "I felt good about it. I was just hoping he would sustain his momentum around the turn, and he finished up and did great. We're feeling like we're seeing a horse that has that talent, and he's doing well, and we felt like that mile and an eighth is something he's looking for. This is the performance we've been looking for."

As part of the official Road to the Kentucky Derby Championship Series, the Wood Memorial awarded Kiaran McLaughlin-trained Enticed an additional 40 qualifying points to bring his total to 103.

"We ran very well to finish second, but I thought [the stewards] could have put us up," said McLaughlin. "It was an excellent race, we finished second, and he deserved to win. I'm sure there will be no change [in our plans to continue to the Kentucky Derby]. He ran a great race."

Restoring Hope held on for third, 2 ¼ lengths behind Enticed, to earn 20 Derby points. It was another six lengths back to Grade 1 Champagne winner Firenze Fire, who earned an additional 10 points for a total of 39.