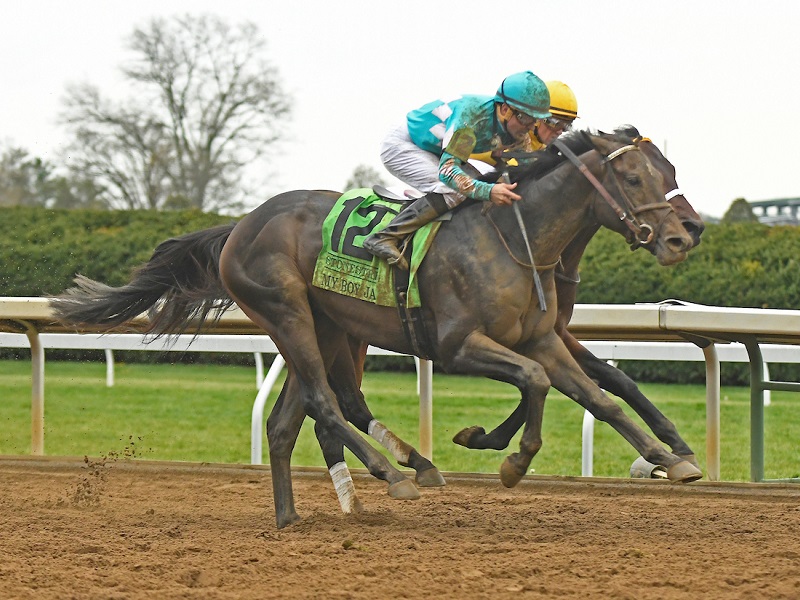 Trained by Keith Desormeaux and ridden by his brother Kent Desormeaux, My Boy Jack covered the 1 1/16 miles on a fast main track in 1:44.22.

Greyvitos led the field of 10 through early fractions of :23.28 and :47.11 while under no pressure as My Boy Jack raced far back in next to last. Approaching the far turn, Telekinesis went after Greyvitos while Desormeaux began picking off horses on the outside.

Turning into the short stretch, Telekinesis put away Greyvitos, but was quickly joined by My Boy Jack, who surged past in the final yards.

A Keeneland sales graduate, My Boy Jack is a Kentucky-bred son of Creative Cause out of the Mineshaft mare Gold N Shaft.

It was another half-length back to Greyvitos, who was followed in order by Seven Trumpets, Zanesville, Honor Up, Navy Armed Guard, Gracida and Arched Feather.

“Unbelievable. Everyone knows we came here to get points and he got the job done today. We’re just thrilled. When I saw (jockey) Kent (Desormeaux) bring him out down the backstretch and we were within six or seven lengths, I felt pretty good about it. I was just hoping he had the gas to get home in the short stretch.”

“He was very, very comfortable in his stride and that was pretty much a repeat of his last start. Fortunately I didn’t grab a hot dog at the quarter pole and that made the difference.” (My Boy Jack closed from the back in the Louisiana Derby-G2 to finish third by three-quarters of a length.).

“I think it will (suit him) probably even better. We always tend to get a true, honest pace in the Kentucky Derby and I think he’ll enjoy that.”

“My trip was perfect. I was in a beautiful position – it was what I was looking for. I cut the corner and saved a lot of ground. I tried to get the jump, but the other horse (My Boy Jack) came way from the outside. Unfortunately, the other horse has been running more lately. My horse has great potential for only running three times.”

“I was very proud of him. He is playing catch-up. This is only his third start, so for him to run as well as he did, I think he is a superstar.”

“He broke sharp and it seemed like he had a lot of energy. He looked good the whole way, it just looked like in the last part they ran by me. I kept trying but he got a little tired in the last part.”

“He ran well. It was a nice bunch of horses he ran with out there today, but he’ll catch up to them.”