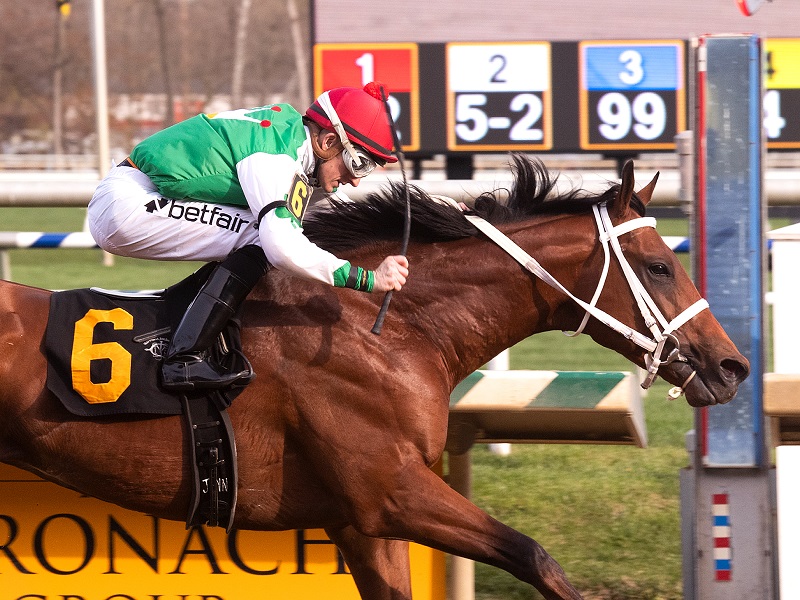 The 37th running of the Tesio for 3-year-olds at 1 1/8 miles was the last of five stakes worth $550,000 in purses on an 11-race Spring Stakes Spectacular program. For the third straight year, the Tesio offered Triple Crown-nominated horses such as Diamond King an automatic berth into the $1.5 million Preakness, the Middle Jewel of the Triple Crown, May 19 at legendary Pimlico Race Course.

“That’s the plan. That’s why we aimed for this [race],” Cash is King managing partner Chuck Zacney said. “We never lost faith in this horse.”

Diamond King ($6.60), favored at 2-1 among nine sophomores, completed the distance in 1:50.31 over a fast main track to win by three-quarters of a length. Holland Park closed fast on the far outside for second, 1 ¼ lengths ahead of Noble Commander. It was another 3 ¼ lengths back to American Lincoln in fourth.

They were followed under the line by Takedown, two-time stakes winner and 5-2 second choice Still Having Fun, 36-1 Private Terms winner V. I. P. Code, Not Fake News and Dynamic Asset.

“I’m tickled to death. It was very impressive,” trainer John Servis said. “I was a little worried about the distance off a long layoff and he’s never really been that far because the only time he was he had that incident. I thought he did great. He handled himself well, relaxed really good, got to loafing a little bit in the stretch which I like to see because that tells me there’s more there. I’m happy with him.”

Servis took over training of Diamond King after Leonard Green’s D.J. Stable bought into the horse following his victory in the Dec. 30 Heft Stakes at Laurel, which came one start after he clipped heels and lost rider Frankie Pennington in the Kentucky Jockey Club (G2). The Quality Road colt hadn’t run since finishing third in the seven-furlong Swale (G3) Feb. 3 at Gulfstream Park, missing Laurel’s Private Terms March 17 with a fever.

“He started with a couple wins, and had a troubled trip in the Swale. We were looking forward to the next race and he got sick right before the race,” said Zacney, who campaigned Afleet Alex to wins in the 2005 Preakness and Belmont Stakes (G1). “He did everything right going into this race. I guess the only concern going into this race was the mile and an eighth, but there’s certainly no doubt after that.”

Noble Commander, a winner of his only two starts including the OBS Sophomore Stakes March 25 at Tampa Bay Downs, settled into an easy rhythm up front under jockey Julien Leparoux through fractions of :23.93, :48.33 and 1:13.27 with mild pressure from Diamond King to his outside. By the time they rounded the turn Diamond King had straightened for home with a lead he would not relinquish, as Noble Commander dug in to give chase but was unable to hold off Holland Park’s late bid.

“I didn’t tell Frankie a whole lot. I told him Julien is very good at controlling pace and just don’t let him get out there and put everybody to sleep, because he can do it,” Servis said. “Sure enough, he got out there quick and slowed it down the second quarter and Frankie lapped right on him, so it was good.”

Pennington has been aboard for all six of Diamond King’s starts, and was impressed with the way his horse handled the stretch out after back-to-back races going seven furlongs.

“He did it very nicely. He settled in nice going the mile and an eighth, which was fantastic,” Pennington said. “When it was time to go, I asked him and he gave it to me.”