Racing Returns to Pimlico Thursday; Preakness Set for May 19 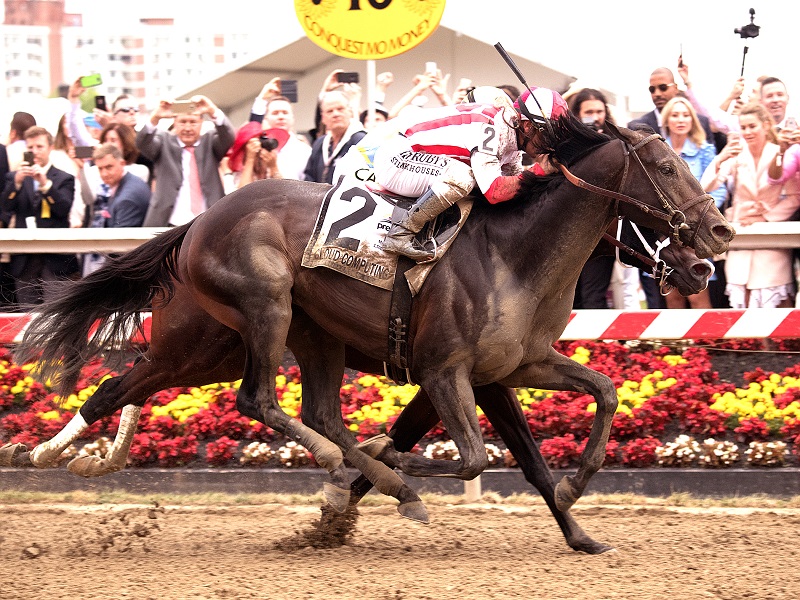 BALTIMORE – Championship racing returns to legendary Pimlico Race Course Thursday for the opening of its 12-day Preakness Meet at Pimlico, highlighted by the 143rd running of the $1.5 million Preakness Stakes (G1) Saturday, May 19.

Justify, undefeated winner of the Kentucky Derby (G1) May 5, will attempt to give Hall of Fame trainer Bob Baffert his record-tying seventh victory in the Preakness. All four of Baffert’s previous Derby winners have gone on to win the Preakness, including 2015 Triple Crown champion American Pharoah.

Racing will be conducted Thursday through Sunday with the exception of Sunday, May 20. The meet wraps up with a special Memorial Day program on Monday, May 28.

“We’re thrilled to get the Preakness Meet at Pimlico started Thursday,” said Sal Sinatra, President and General Manager of the Maryland Jockey Club. “Pimlico is legendary, and the Preakness, Black-Eyed Susan and Pimlico Special are historic and significant events on the sporting calendar. The Stronach Group has done an incredible job improving the customer experience here with upgrades in food and beverage, a revamped infield layout that will connect Infield guests with the races, upgrades to the Preakness Village and Turfside Terrace and new Wi-Fi throughout the clubhouse and infield.

“Horsemen throughout North America are committed to providing world-class racing during the Preakness Meet at Pimlico, full fields, and great racing on the main track and turf course. We’re excited about what has become one of the best boutique race meets in the country.”

A field of seven 3-year-olds and up will go 1 1/16 miles over the turf course in a $23,000 claiming event to open Thursday’s nine-race program that begins at 1:10 p.m. Five races have been carded for the grass attracting 54 entries, an average of 10.8 per race.

Pimlico will also serve up a nine-race program Friday, May 11 that features five turf races that saw 68 horses entered, an average of 13.6 per race.

Hall of Fame jockey Edgar Prado enters the Pimlico meet on the verge of becoming only the eighth rider in Thoroughbred history to reach 7,000 career victories. A 24-time leading rider in Maryland from 1991-99, he stands at 6,997 and is named in two of nine races both Thursday and Friday.

Pimlico will serve as the launching pad for the renewed Mid-Atlantic Thoroughbred Championship (MATCH) Series, an assortment of 25 races at tracks in Maryland, Delaware, New Jersey and Pennsylvania which originally debuted in 1997 and ran for five years.

The Maryland Sprint and Skipat, the latter for fillies and mares, open the dirt sprint division of the MATCH Series on May 18 and 19, respectively. The turf sprint division is kicked off with the Jim McKay Turf Sprint May 18 and The Very One for females May 19.

Seven guaranteed multi-race wagering pools will be offered over Preakness weekend. On Friday, May 18 the Late Pick 5 (Races 7-11), offering an industry-low 12 percent takeout, and Pick 4 wagers covering Races 8-11 and 11-14 will each be guaranteed at $300,000.

Preakness Week at Pimlico offers several events including Sunrise at Old Hilltop, where fans can have breakfast trackside while watching horses go through their morning exercise Tuesday, May 15 through Friday, May 18; the traditional Alibi Breakfast on Thursday, May 17; and Budweiser InfieldFest, one of the country’s most eclectic outdoor music festivals.

Headlining this year’s InfieldFest on Preakness Day are Post Malone, 21 Savage and Odesza on the event’s new 65-foot mega-stage designed to give attendees a view of the live racing. Also scheduled to perform are DJs Vice and Frank Walker. Additional information can be found at www.preakness.com.