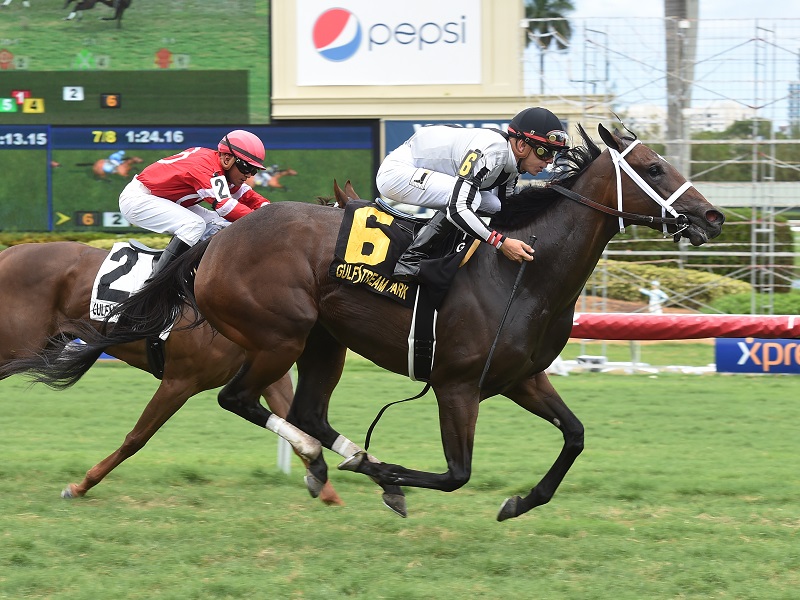 Bailey rode seven winners on the March 11, 1995 Florida Derby Day program, missing an eighth visit to the winner’s circle when he and Suave Prospect fell a nose short of beating Thunder Gulch in the Florida Derby (G1).

Born six months after Bailey’s record-setting performance, Gaffalione won the first three races, visiting the winner’s circle with Break Away ($6.40) and Poopsie Doopsie ($12) before scoring in the $100,000 Martha Washington Stakes aboard Adorable Miss ($3). The 22-year-old native of Davie, FL added victories aboard Perfect Tay ($6.60) in the fifth, Sambrook Edge ($4.80) in the seventh, Isum Money ($9.80) in the eighth, and Stormin Charlotte ($6.40) in the ninth.

“It is amazing. I grew up idolizing Jerry Bailey. I copied basically everything he did. Between him and my father, they’re my two biggest influences,” said Gaffalione, whose father Steve Gaffalione rode nearly 900 winners during a career that spanned 1978-1998. “This is such an honor. I can’t thank everyone enough, my agent (Matt Muzikar), all the trainers, the owners, the horses and everyone in the jock’s room for all their support.”

Gaffalione rode his first winner on his third career mount, scoring aboard Holdin Bullets at Gulfstream Sept. 7, 2014. He went on to ride 217 winners in 2015 to earn the Eclipse Award as North America’s outstanding apprentice jockey. He rode five winners on the Sept. 20, 2015 card at Gulfstream. Three weeks later, he rode four winners on his first day as a journeyman at Gulfstream Oct. 11, 2015, signaling that he wasn’t about to let his business slip while riding without the benefit of the five-pound apprentice allowance.

Gaffalione went on to win 208 winners in his first year as a journeyman in 2016 and has built on that success this year both at Gulfstream and in out-of-town stakes. He currently tops the 2017 national win standings with 156 victories.

Mathis Stable LLC’s Adorable Miss made a victorious return to South Florida Tuesday, running her record to 3-for-3 over Gulfstream Park’s turf course in the $100,000 Martha Washington Stakes under Gaffalione.

Trained by Todd Pletcher, the daughter of Kitten’s Joy scored by a measured margin of three-quarters of a length in the mile turf event for 3-year-old fillies that highlighted a Freedom Fest program along with the $100,000 Not Surprising, a mile turf test for sophomores.

“Todd and his team did a great job getting this filly ready for today. I literally just had to get around there. She was all horse today,” Gaffalione said.

Adorable Miss, whose only loss in four career races came in the $200,000 Penn (National) Oaks June 3, is scheduled to be sold at the Fasig-Tipton’ Horse of Racing Age Sale July 10 in Lexington, Ky.

Adorable Miss rated nicely alongside pacesetter Katinka into the stretch before drawing away to record her second stakes victory at Gulfstream, running the mile over a firm turf in 1:35.59.

“We felt like she’s had a lot of promise from Day 1 and she continues to learn how to run a smart race,” Mathis Stable LLC’s Bill Mathis said. “She won the Honey Ryder from a really tough position and came flying home. We knew if she learned to run right, she’d really be something special.  Tyler said she had a whole other gear today that he didn’t ask for.”

Gaffalione’s bid for a record-breaking eighth victory aboard Bronson fell three-quarters of a length short when General McGooby ($22) held off the 6-5 favorite to win the $100,000 Not Surprising.

Ridden by Ramsey Zimmerman, General McGooby led throughout the mile turf event for 3-year-olds to register his first stakes triumph. The son of General Quarters ran the distance in 1:34.65.

Trained by Lilli Kurtinecz, No Palla Stables’ General McGooby had finished second behind Bronson in the English Channel Stakes May 6 before finishing a disappointing fifth in a recent optional claiming allowance.

“He never runs the same race twice so you never know what you’re going to get. He tries every time. For him to hang on was awesome,” Kurtinecz said.

“It was just an absolute hang-me-on. I had nothing to do with him winning, He’s such a nice horse and was well-prepared,” Zimmerman said. “It’s a blessing to be on him.”

The Todd Pletcher-trained Bronson finished 1 ½ lengths ahead of Coleman Rocky.