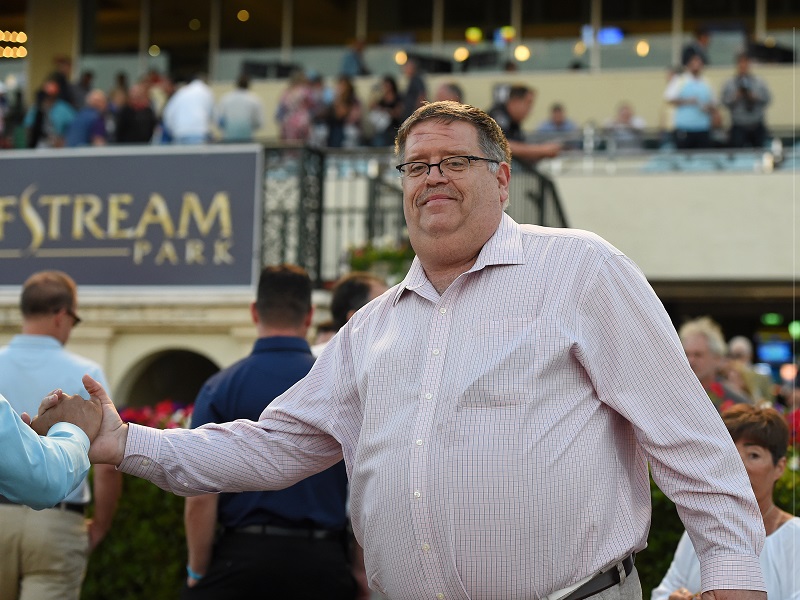 BALTIMORE – Trainer Dale Romans, who has enjoyed considerable success through the years at legendary Pimlico Race Course, will send out a pair of talented stakes winners on Friday as he goes in search of his third victory in the $250,000 Xpressbet Black-Eyed Susan (G2).

The 94th running of the 1 1/8-mile Black-Eyed Susan for 3-year-old fillies highlights a 14-race program that includes seven stakes, four graded, worth $1.15 million in purses on the eve of the 143rd Preakness Stakes (G1), the Middle Jewel of the Triple Crown.

Friday, he will be represented by Roddy Valente, RAP Racing and West Point Thoroughbreds’ Coach Rocks, a come-from-behind winner of the Gulfstream Park Oaks (G2) on March 31 and subsequently seventh in the Kentucky Oaks (G1) May 4 at Churchill Downs, and William Pacella, Frank L. Jones and Frank Shoop’s C. S. Incharge, victorious in the Suncoast Stakes in February at Tampa Bay Downs and then sixth in the Ashland (G1) on April 7 at Keeneland.

“They're both nice fillies,” Romans said. “C.S. Incharge is an improving filly, and Coach came out of the Kentucky Oaks in good shape. I didn't like the way she ran, but we're going to wheel her right back the same way we did with Maggie. It'd be nice if we got the same kind of finish in the race as we did that year; it's a great race and I've always liked it.”

Among the more accomplished members of the field is William B. Wilmot and Joan M. Taylor's Midnight Disguise, a multiple stakes winner of more than $270,000 in New York. The Midnight Lute filly has won four of her six career starts, including back-to-back stakes victories in the $100,000 Busanda and $200,000 Busher at Aqueduct.

In her most recent start, she was fourth as the beaten favorite in the Gazelle (G2), finishing 13 lengths behind My Miss Lilly.

“She ran two great races in the Busanda and Busher - a lifetime best in the Busher - and then bounced in the Gazelle,” trainer Linda Rice said. “She had enough points to go to the Kentucky Oaks but we had no interest in going there off her performance in the Gazelle. But, since then, she's had a couple of nice breezes. We'll be putting blinkers on her and Irad Ortiz, Jr., who was two-for-two in her first two starts, will be back on her. So, we're looking to turn the tables from her last race."

The Kiaran McLaughlin-trained Sara Street will be making the journey from New York as well as she goes in search of her second victory in four starts this year. Bred and owned by Godolphin, the daughter of 2007 Kentucky Derby (G1) winner Street Sense out of the graded stakes winning mare Sara Louise broke her maiden on Feb. 4 at Aqueduct, then finished second in the Busher and second in the Gazelle.

“She went straight from a maiden to a stakes, and ran a really good second in the Busher and another really good second in the Gazelle,” McLaughlin said. “We were thinking about the Kentucky Oaks but thought this would be a somewhat easier spot in addition to being an important race. She's a smallish filly, but always tries hard and is very competitive. She should run well.”

RMJ Stables' Mihrab returns to stakes company after turning in an eye-catching allowance win on April 28 at Laurel Park, where she rallied from sixth to win by eight lengths going 1 1/16 miles.

“I was very impressed with her last race,” trainer Graham Motion said. “The number didn’t come back that strong but you certainly couldn’t fault the way she did it. We ran her at Gulfstream in their version of the Oaks and she had a terrible post that day [finishing ninth from post position 10]. I probably shouldn’t even have run her, so I was pleased with her recent effort. She’s done very well since she got back to Fair Hill. We’ll be taking a shot here but if she can duplicate that allowance win she can be competitive.”

Expected to attract attention is local standout Goodonehoney, who has won both her races by a combined margin of 11 3/4 lengths, albeit in decidedly different styles. In her first start on March 24 at Laurel, the Maryland-bred daughter of Great Notion was off slowly, but revved up once clear to score by 4 3/4 lengths.

Four weeks later, she made her stakes debut a winning one for owners Kasey K Racing Stable LLC, Final Turn Racing Stable LLC and Michael R. Day, grabbing the lead soon after the start and drawing off to a seven-length win in the 1 1/16-mile Weber City Miss, earning her an automatic berth in the Black-Eyed Susan.

“We are asking a lot of her,” trainer Jason Egan said. “She'll be facing probably the best group of horses she's ever had to, and she's never experienced that kind of atmosphere, either. She has earned it, and we are really happy with where she's at right now.”

Robert G. Hahn’s Indy Union will be making her second start of the year in the Black-Eyed Susan, having finished second, seven lengths back, in the Weber City Miss. The Union Rags filly won one of her five starts in 2017, scoring by seven in a one-mile maiden around one turn at Belmont Park, then concluded her juvenile campaign with a sixth in the Demoiselle (G2) at Aqueduct Racetrack.

Also entered is Loooch Racing Stables’ maiden Tell Your Mama, who finished fourth behind Coach Rocks in the Gulfstream Park Oaks in her East coast debut and returned to run second, beaten a half-length, in a 1 1/16-mile maiden race on April 22 at Keeneland.

Rounding out the field are Red Ruby, winner of the Martha Washington Stakes in February at Oaklawn Park, and Stakes On a Plane, most recently fourth in the Weber City Miss.