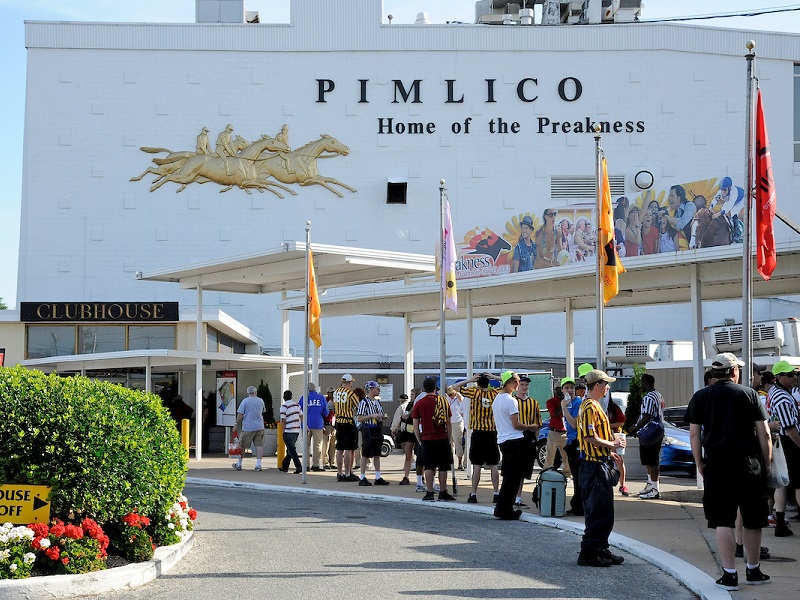 BALTIMORE – A severe thunderstorm swept through the area in mid-afternoon Sunday, bringing heavy rain and lightning and forcing the Maryland Jockey Club to cancel the balance of the 10-race program at legendary Pimlico Race Course.

The storm produced 1 ½ inches of rain in a short time and its intensity caused the main track to be uneven in spots. Following a lengthy delay, and with the forecast calling for more rain, the decision was made to cancel the final six races.

“For the safety of our horses and horsemen, we decided to suspend racing for the day,” said Maryland Jockey Club President and General Manager Sal Sinatra, who walked the track with several jockeys during the delay. “Track maintenance crews went out as soon as they were able and did a commendable job with the surface, but with the prospect of more heavy rain coming we felt it was in everyone’s best interests to cancel. We thank our horsemen, fans and patrons for their patience and understanding and look forward to a special Memorial Day program.”

The Rainbow 6 (Races 4-9) will have a jackpot carryover of $279,837.20, with two races in the sequence scheduled for the turf and the featured $42,000 entry-level allowance for fillies and mares 3 and up going six furlongs on the main track in Race 8.

The carryover jackpot is only paid out when there is a single unique ticket sold with all six winners. On days when there is no unique ticket, 60 percent of that day’s pool goes back to those bettors holding tickets with the most winners while 40 percent is carried over to the jackpot pool. However, on mandatory days the entire pool is paid out to the holders of tickets with the most winners.

Notes: Jockey Alex Cintron and trainer Michael Matz teamed up for a pair of winners before Sunday’s cancellation, with C C Rider ($8.40) in the second race and Daddy’s Cozy ($2.40) in the fourth … Heading into Monday’s closing day, jockey Feargal Lynch leads all riders with nine wins, three more than Horacio Karamanos and Rosario Montanez. Trainer Kieron Magee is tops with five wins, with five trainers tied at four apiece.