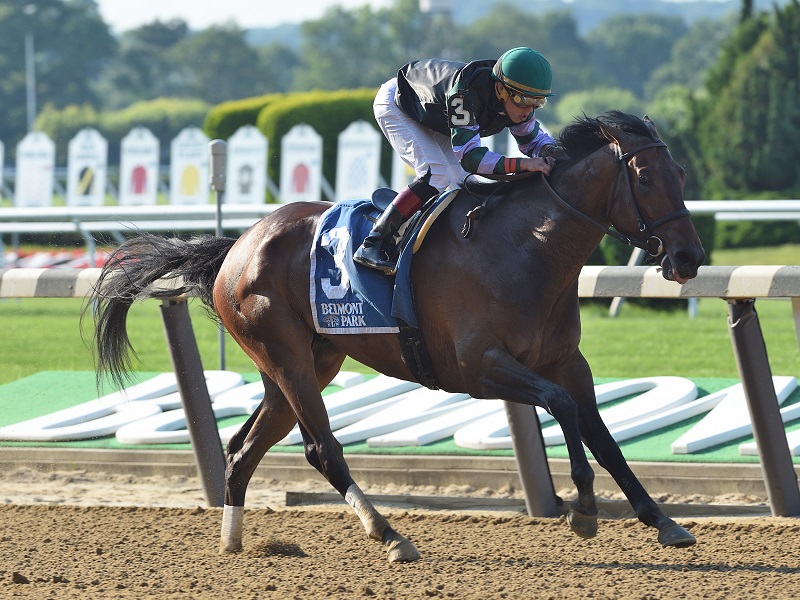 SARATOGA SPRINGS, N.Y. - On Saturday at Saratoga Race Course, one of thoroughbred racing's most prestigious races will come down to a New York-style affair as New York-bred Horse of the Year candidates Diversify and Mind Your Biscuits top a field of eight in the Grade 1, $1.2 million Whitney.

The 91st running of the 1 1/8-mile Whitney, a "Win and You're In" qualifier for the Grade 1 Breeders' Cup Classic on November 3 at Churchill Downs, will be aired nationally on Saratoga Live on NBCSN from 5-6 p.m. ET. The NBCSN broadcast, which will also feature the Grade 1, $500,000 Test, will follow Saratoga Live on FS2 beginning at 2:30 p.m.

Lauren Evans and Ralph M. Evans' Diversify, who was rerouted to the Whitney from a planned start in the Grade 1, $750,000 Woodward on September 2, is exiting an impressive 6 ½-length victory in the Grade 2 Suburban at 1 ¼ miles on July 7 at Belmont Park. That victory earned the 5-year-old Bellamy Road gelding a career-high 110 Beyer Speed Figure.

"I was very concerned after the Suburban. He had run such a huge race that I thought that four weeks might be too quick," said trainer Rick Violette, Jr. "But he kept making a liar out of me. He ate well, trained well and breezed awfully well on Sunday. His blood has a habit of spiking up and down, so we had to make sure that duck was in a row. We got back those results today. Sometimes, when your horse is doing good, you're supposed to run."

The Suburban was the third race of the year for Diversify, and his first graded stakes since finishing a disastrous seventh as the post-time favorite in the Grade 2 Charles Town Classic, his seasonal debut. Following that effort, Diversify's connections opted to move the gelding back against state-bred company in the one-mile Commentator on May 28, where he stumbled at the break but recovered quickly enough to win by a hard-fought nose.

Overall, Diversify owns nine wins and two seconds from 14 starts for career earnings of $1,309,425. Last year, the characteristic frontrunner won four of eight races, including an 11 ½-length score in the 1 1/8-mile Evan Shipman against New York-breds, his only previous start at Saratoga and the second of three straight wins in the summer and fall. He capped that win streak with a gutsy one-length victory in the Grade 1, $750,000 Jockey Club Gold Cup, a title Violette said he hopes to defend on September 29 at Belmont.

"We have a few options. He can be tactical and if someone wants to get silly out there, we can certainly follow that lead," said Violette. "We'll be aggressive; the break is always important, [whether] it's a mile and a half or five eighths, it's critical there. He has the ability and has a very high cruising speed and [can] keep going. A lot of times, we just throw the gauntlet down."

Irad Ortiz, Jr. retains the mount aboard Diversify, tabbed as the 7-5 favorite on the morning line. The pair will leave from post 6.

Already established as one of nation's top sprinters, reigning New York-bred Horse of the Year Mind Your Biscuits is looking to expand on his resume as he takes on a two-turn route for the first time in the Whitney.

Trained by Chad Summers, the 5-year-old multi-millionaire by Posse has traveled to Dubai for thrilling back-to-back victories in the Group 1 Golden Shaheen at Meydan Racecourse, including a dramatic, last-to-first rally in this year's edition over X Y Jet and champion sprinter Roy H.

In his two stakes tries at a mile, his longest distance to date and both around a single turn, Mind Your Biscuits was second to multiple graded stakes winner Sharp Azteca in the Grade 1 Cigar Mile last December and just missed last time out in the Grade 1 Metropolitan Handicap, coming up a nose short of a loose-on-the-lead Bee Jersey on June 9 at Belmont Park.

From five starts at Saratoga, the strapping chestnut's local record includes a victory in the Grade 2 Amsterdam as a 3-year-old in 2016 as well as two rare off-the-board finishes in the 2016 Grade 1 King's Bishop and the Grade 1 Forego last summer, where he finished fifth and sixth, respectively.

"I expect him to be much closer with Diversify coming drawn out in the 6, and [they're] giving us six pounds it's a short run into the first turn, and if Diversify gets hung wide, he gets hung wide," said Summers.

"I'm as confident as I can be ... everything he's always shown me over his entire career is that he can do it, and until he can't, I'm not going to think he can't."

Mind Your Biscuits, co-owned by Summers and his family, Shadai Farm, Head of Plains Partners and Michael Kisber, will have the services of his regular jockey Joel Rosario. The 2-1 second-choice will leave from post 4. He will carry 117 pounds, a seven-pound weight allowance, in his first race around two turns.

Ken and Sarah Ramsey's Backyard Heaven will look to rebound for trainer Chad Brown after snapping a three-race win streak in the June 16 Stephen Foster last time out, giving way late to finish sixth in his Grade 1 debut.

The Stephen Foster was Backyard Heaven's fifth career start and second consecutive race at Churchill Downs. In the Grade 2 Alysheba on May 4, the 4-year-old Tiznow colt raced close to the pace and drew off to a 4 ½-length win.

"The horse is training well, it's shaping up like a tough one," said the two-time Eclipse Award-winning trainer. "He's only run the one bad race for us at Churchill. Maybe it was the heat. We'll draw a line through it because the horse has been training well since and hopefully he bounces back and regains the form he has.

"He's lightly raced and has come around so fast. I feel he's so talented; in the Alysheba, he ran fabulous in that race. If he redeems himself and comes back to a performance like that, I feel he can be a real contender in this race."

Backyard Heaven, 9-2, will be ridden by Hall of Famer Javier Castellano from post 2.

Three-time Whitney-winning trainer Todd Pletcher will send out multiple graded stakes winner Tapwrit, for owners Eclipse Thoroughbred Partners, Robert LaPenta, Bridlewood Farm, Gainesway Stable, and Whisper Hill Farm. The 4-year-old gray colt by Tapit is seeking his first win since his triumph in the 2017 Grade 1 Belmont Stakes. Tapwrit, tabled following a fourth-place finish in the Travers last year, has raced twice in 2018, finishing third in an optional claimer in June at Belmont Park and a wide fifth as the favorite in the Grade 2 Suburban on July 7.

At 6-1 on the morning line, Tapwrit will be ridden by Hall of Fame jockey and four-time Whitney winner John Velazquez from the rail.

After beginning his career on turf, Good Samaritan was moved last year to the main track for the second half of his sophomore season. He got off to a fast start, besting Kentucky Derby victor Always Dreaming and Preakness winner Cloud Computing in a 4 ¾-length upset in the Grade 2 Jim Dandy that summer. That effort was followed by a fifth-place in the Travers and then a fourth against older horses in the Grade 1 Jockey Club Gold Cup at Belmont. He closed out his 3-year-old campaign in November with a close runner-up finish in the Grade 1 Clark at Churchill Downs.

His lone victory this year came in his seasonal bow with a 2 ¼-length win in the Grade 2 New Orleans Handicap on March 24. Prior to the Met Mile, Good Samaritan finished third in the Alysheba, 5 ½ lengths behind Backyard Heaven.

Good Samaritan, 12-1, will break from post 7 with Jose Ortiz aboard.

Whitham Thoroughbred's homebred McCraken will look for redemption following a third-place finish last time out as the 7-5 favorite in the Grade 3 Cornhusker Handicap on July 6 at Prairie Meadows.

The 4-year-old Ghostzapper colt was seventh in last year's Travers, his only other appearance at the Spa, following a runner-up finish to Girvin in the Grade 1 Haskell Invitational. This year, McCraken returned in May with a half-length win in an optional claiming race on the Kentucky Derby undercard at Churchill Downs and was sixth in the Met Mile.

McCraken, who drew post 8 at odds of 15-1, is trained by Ian Wilkes and ridden by Brian Hernandez, Jr., who teamed up with Janis Whitham to win the 2012 Whitney with Fort Larned, who went on to victory in that year's Breeders' Cup Classic.

Dalmore, a 5-year-old Florida-bred gelding by Colonel John, was second to Remembering Rita last time out in the Cornhusker. He will be ridden by Ricardo Santana, Jr. from post 3 at 30-1.

Grade 3 Excelsior winner Discreet Lover, exiting a third-place finish in the Suburban, will complete the Whitney field for owner-trainer Uriah St. Lewis. By Repent, the 5-year-old Florida-bred boasts the most experience of the group, as he prepares to make his 42nd career start. Manny Franco will ride Discreet Lover, 30-1, from post 5.