Plenty of competition in Saturday's G1 Fourstardave at Saratoga 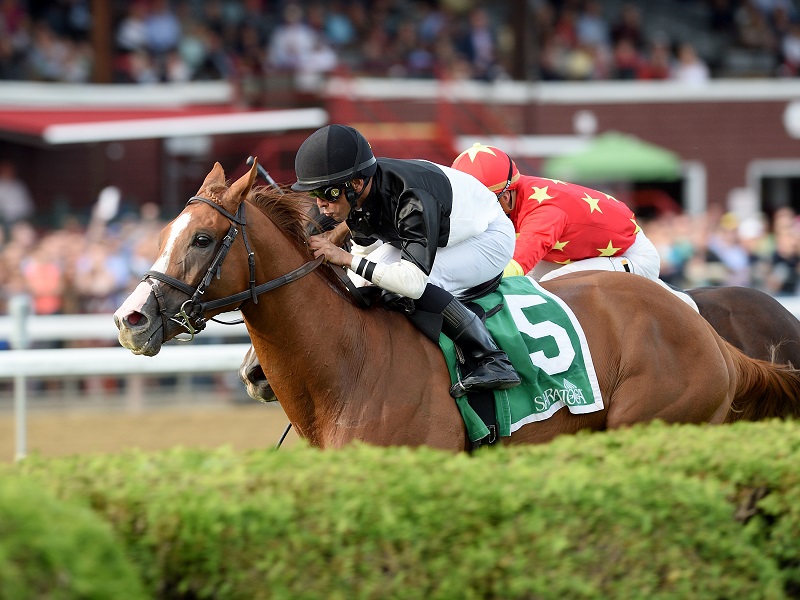 SARATOGA SPRINGS, N.Y. - A strong field of seven is set to compete in Saturday's Grade 1, $500,000 Fourstardave Handicap at one mile on the inner turf at Saratoga Race Course.

Barry K. Schwartz's Voodoo Song returns to Saratoga after the son of English Channel rattled off four straight wins at the Spa in 2017, highlighted by his neck victory over Yoshida in the Grade 3 Saranac.

The 4-year-old colt made his first start at Saratoga on the second day of the meet last year, and his second on grass since he broke his maiden at Aqueduct in 2016. The decision to return to the sod proved successful after the New York-bred was transferred to Linda Rice's barn after Mike Hushion retired from training last spring.

Remarkably, Voodoo Song returned to victory just four days later, then made his next start in late August and quickly became a fan favorite, winning his first try against graded stakes company. Through all four starts at Saratoga, Voodoo Song remains un-headed by 31 other rivals winning in gate-to-wire fashion over both turf courses. The projected softer ground in his 16th career start could play a role at post time, said Rice.

"Clearly he loves the turf," she said. "He likes the configuration here. Last year, we got very little rain and he likes it hard and fast. This year, he has run at Belmont on softer turf and has actually performed quite well. I would prefer a firm course for him, and I don't know if we will have that."

Voodoo Song will look to extend his local win streak in his first Grade 1 start after winning the $150,000 Forbidden Apple on July 14 at Belmont Park.

"He has not proven to be a Grade 1 horse yet," said Rice. "I think he has improved from 3 to 4 even though he won four in a row here. He went through his conditions, and he has gotten a couple of 100 Beyers. I do think we have seen improvement, but the races get tougher the more you win."

Voodoo Song will apply his speed from post 6 and will be ridden by Jose Lezcano.

Stronach Stable's Delta Prince is another starter whose connections hope for firm ground. The 5-year-old by Street Cry enters off his first graded stakes victory in the June 30 Grade 2 King Edward at Woodbine, and will make only his second start this year for trainer Jimmy Jerkens.

The Kentucky-bred ended his 4-year-old season with a third place finish in the Grade 2 Bernard Baruch Handicap at Saratoga on September 4, and has missed plenty of time due to minor issues throughout his career.

"He seems to be doing good," Jerkens said. "It was very good, especially after that long layoff. He's a very willing horse in the morning so that helps alot. He's a natural athlete. He's long and kind of slender through the middle. He keeps himself worked up and gets himself fit too, so if ever a horse can get away with it, it's him."

"Let's hope it's not too soft," Jerkens said. "He seems to struggle a little bit. He ran very well in his race last year [Bernard Baruch], but I could tell it was a little soft and he kind of struggled a little bit more so than when it's firm."

With Delta Prince now making his ninth career start, Jerkens expects better results and said he is pleased with how his horse, a half-brother to three-time Eclipse Award winner Royal Delta, has turned the corner with his victory at Woodbine.

"Javier [Castellano] rode him good too," said Jerkens. "Took him back a little bit, let them go out there and let him settle, tried to save him a little bit, which is a smart thing to do especially after a long layoff like that. He's been very consistent. I wish I would be able to run him a little more."

Delta Prince drew post 2 and will be ridden by Hall of Famer Javier Castellano.

Multiple graded stakes winner Made You Look will carry the colors of Three Chimneys Farm while looking to step up off his second-place finish in the Grade 3 Poker at Belmont. The 4-year-old colt by More Than Ready won the Grade 2 With Anticipation as a 2-year-old at Saratoga, and will make his third start of the year for trainer Chad Brown.

"He's doing well," Brown said. "It's a big step up for him. It's a tough race, but the horse is training super. I thought he ran a great race last time out and it's worth a shot."

Made You Look will break from post 4 and may be ridden by Luis Saez, who has first call aboard main track-only entrant Weekend Hideaway.

Yoshida starts from post 7 and gets the services of Manuel Franco in the irons.

Multiple Grade 1 winner Heart to Heart brings a wealth of experience with him to the Fourstardave, which will mark making his 37th career start. The 7-year-old by English Channel enters off a second-place finish in the Shoemaker Mile at Santa Anita on May 28, and owns two Grade 1 victories in the Gulfstream Park Turf, and the Maker 46 Mile at Keeneland. The Ontario-bred is perfect through two starts at Saratoga after winning the $100,000 Better Talk Now in 2014 and the Grade 2 Bernard Baruch last year.

Heart to Heart drew post 5, and will be ridden by Julien Leparoux.

Rounding out the field in the Fourstardave is Weekend Hideaway entered for the main track for trainer Phil Serpe and jockey Luis Saez from post 1; and Divisidero, cross-entered in Saturday's Grade 1 Arlington Million for trainer Kelly Rubley and jockey Jevian Toledo, from post 3.