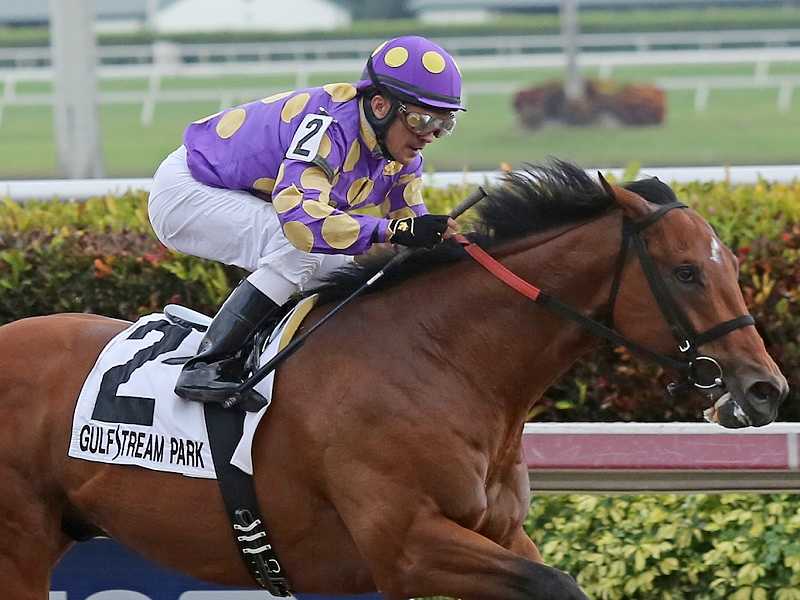 It marked the first starter for Jacks or Better, an 88-acre spread situated in Ocala, since owners Fred and Jane Brei established a string of 25 horses at Laurel for the first time under the care of one-time farm trainer Ken Decker.

Awesome Banner was third in the Maryland Sprint (G3) May 20 at historic Pimlico Race Course and most recently second in the Smile Sprint (G2) July 1 at Gulfstream Park. Fellowship, who raced in both the 2016 Preakness (G1) and 2017 Pimlico Special (G3), ran in the Belmont Sprint Championship (G2) July 8 at Belmont Park.

“Both of those horses are graded stakes-quality horses and need to run in those races. There was no way I wanted to be 1,800 miles or a 24-hour ship away from those races,” Fred Brei said. “Because of those two horses, it was extremely convenient for us to be there. We keep trying to meet the same challenge as every other owner in the country – where can you go to find the races you need in the quantity you need them?”

Jacks or Better, distinctive for its purple silks with gold polka dots, has found a home at Laurel, where nearing the midway point of the 33-day summer meet it has finished in the money with 10 of its 20 starters including two wins, three seconds and five thirds.

The first victory of its current tenure at Laurel came with the 4-year-old Fellowship, another homebred son of Awesome of Course, the stallion that put Jacks or Better on the map when his daughter, Awesome Feather, won the 2010 Breeders’ Cup Juvenile Fillies (G1) and was later named champion 2-year-old filly.

Fellowship, on the Triple Crown trail last spring with thirds in the Holy Bull (G2), Fountain of Youth (G2) and Florida Derby (G1) at Gulfstream, was impressive in a 2 ½-length score April 16 that set him up for a return to graded stakes company.

“I go way back with Fred and Jane. I was with them when they first started in Ocala,” Decker, 58, said. “I started breaking the babies at the farm and I did that for about eight or nine years, and I’ve been training on and off for Fred and Jane since that time. We went to Colonial and ran a meet in Delaware in 2007 and went to Louisiana.

Other winners for Jacks or Better at Laurel are 4-year-old Year Book and 3-year-old Faith ‘n Works, both in maiden claiming company, and 5-year-old Social Media, who captured claiming events on June 10 and July 1.

Also in the Laurel barn are 9-year-old multiple stakes-winner Grande Shores, a veteran of 65 starts with more than $650,000 in purse earnings and placings in four Grade 3 races most recently third in a six-furlong claiming event July 9, and multiple stakes winner Sing Praises.

Brei, a 74-year-old native of Poplar Grove, Ill., is happy to have Decker back in the fold and running the operation at Laurel.

“Kenny Decker and I go back to 19 years ago. I hired him and put him in charge of our training barn. Then he decided he wanted to go out and train horses,” Brei said. “He was going to Louisiana and I didn’t want to go there. I wanted to stay in South Florida and that’s where we parted company and that was the only reason we did.

“When we saw the program not working as we wished it to work, I called Kenny and asked him, ‘Do you want to go back in the training business?’ and he said ‘I’ve been waiting 10 years for this phone call,’” he added. “We sent some horses out to Delta so he could get back in it and then we were deciding where to go from there. We have a number of the $5,000 to $25,000 horses, horses that have run enough that we know that’s what they are, at various distances that need to run. We decided to look at Laurel.”

Brei is a builder/developer who founded and served as CEO of Canterbury Corp, a long-term retirement facility in Crystal Lake, Ill., until selling it in 1995 and moving to Ocala. He bought his first broodmare in 1972 and raced a small stable in the Midwest before taking a 15-year break to concentrate on his business. His wife is a retired nurse.

Jacks or Better owns a record 18 total wins in the Florida Sire Stakes, earned the Needles Award as Florida’s outstanding small breeding operation in 2001 and 2004 and has been Florida-bred Breeder of the Year the past two years. They have found success breeding their mares to their own stallions, particularly Awesome of Course and Hear No Evil.

“They’re really good people. They love the business. Miss Jane, she’s about the mommas and babies and Fred oversees the yearlings and 2-year-olds,” Decker said. “They’re super-good people to work for. We talk a lot and go over things but he pretty much leaves it to me. If we decide to do something crazy he’ll say go ahead, and a lot of times it works. It’s really good. I’m glad to get reconnected with them and get a nice string of horses back up here.”

Among other success stories for the farm are homebreds Jackson Bend, a multiple Grade 1 winner by Hear No Evil that was third in the 2010 Preakness; multiple stakes winner and Grade 1-placed Fort Loudon, by Awesome of Course, and Grade 3 winners Bayou’s Lassie, C. Zee, Dogwood Trail and Radical Riley.

“This business has got a lot of ups and downs but from Day 1, Fred and I sit down and we map out what we want to try to do with the horses. Most all of these that we’ve got are all by those two stallions and out of most of the fillies. I broke most all of them so I know when they get here what kind of temperament they’re supposed to have,” Decker said.

“They’ve got nice horses and if you need something, just ask. That’s nice to have in this business,” he added. “We don’t cut corners. From the cheaper horses right on up to Awesome Banner and Fellowship, everybody gets the same treatment and same opportunity. That’s the way it’s always been with them.”