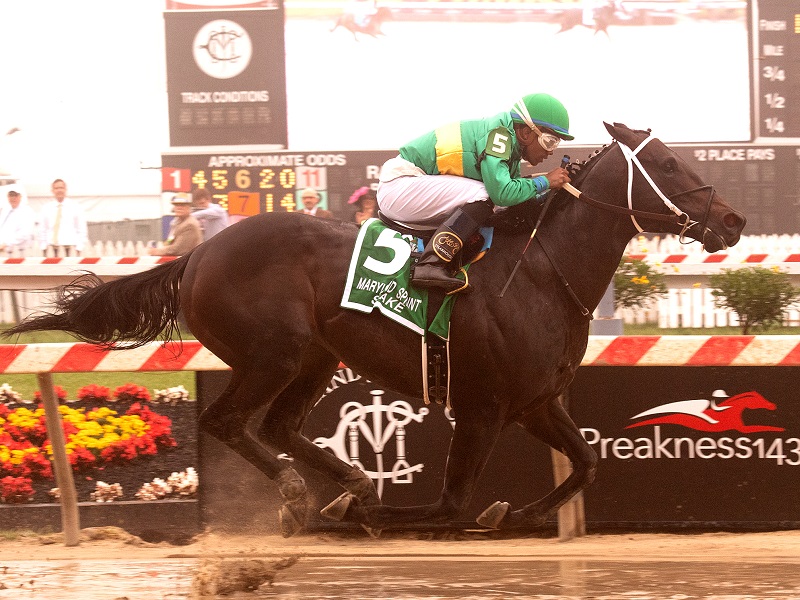 The 27th running of the six-furlong De Francis for sprinters 3 and up highlights seven stakes, six scheduled for Laurel’s world-class turf course, worth $900,000 in purses on a 13-race Fall Festival of Racing program that was rescheduled from Sept. 15 due to the threat of severe weather from Hurricane Florence.

Named for the late president and chairman of both Laurel and legendary Pimlico Race Course, the De Francis’ roster of past winners include Hall of Famer Housebuster and fellow sprint champions Cherokee Run, Smoke Glacken, Thor’s Echo and Benny the Bull.

This year’s De Francis marks the fifth and final race in the 3-year-old and up dirt sprint division of the revived Mid-Atlantic Thoroughbred Championship (MATCH) Series, an assortment of 25 races at tracks in Maryland, Delaware, New Jersey and Pennsylvania which kicked off May 18 and 19 at Pimlico. The original MATCH Series debuted in 1997 and ran for five years.

Woodford Racing’s Switzerland went winless in seven starts as a 3-year-old but returned this year to reel off four consecutive victories capped by the six-furlong Maryland Sprint (G3) May 19 at Pimlico on the Preakness (G1) undercard. In that race, the son of champion Speightstown took the lead after a half-mile and sprinted clear to win by 3 ½ lengths.

Trained by Hall of Famer Steve Asmussen, Switzerland has made one start since then, setting the pace for four furlongs before flattening out to run fifth of seven in the Alfred G. Vanderbilt (G1) July 28 at Saratoga, also at six furlongs. Feargal Lynch is named to ride from Post 1; all horses will carry 120 pounds.

Gil Campbell’s Stonehedge homebred Always Sunshine enters the De Francis having won back-to-back stakes at six furlongs – the Hockessin at Delaware Park July 14 and the Tale of the Cat Aug. 10 at Saratoga – for trainer Ned Allard. An eight-time winner of $517,650 in purses from 23 career starts, the 6-year-old son of West Acre won the Maryland Sprint in 2016.

“The thing that’s good about him is, he’s got plenty of speed but he’ll sit off the pace a little bit and he’s got a good pounce. I think that’s the right kind of horse to have if you can get them,” Allard said. “Good horses are what we dream about and when you’ve got one, it’s a lot of fun.”

Where Switzerland will be making his Laurel debut, Always Sunshine has run well in three previous tries over the main track, winning the 2015 Dave’s Friend Stakes. He hasn’t run worse than fourth in four races this year after returning from a 10-month layoff.

“He had popped a few quarter cracks as a younger horse and it would always interrupt his schedule. A quarter crack is like having a rock in your shoe. You can’t [run] when you’ve got them,” Allard said. “There’s a lot of procedures that you can do to wire them together and patch them up. We had done that with him before and it worked well but it always seemed to pinch him a little bit. This year, knock on wood, we’ve been very fortunate that the foot issues haven’t reoccurred and it seems to be making him a little bit better horse.”

Hillside Equestrian Meadows’ Laki, based at Laurel with trainer Damon Dilodovico, is cutting back after finishing second by a nose in the seven-furlong Polynesian Stakes Aug. 12 at Laurel but placed first upon the disqualification of fellow De Francis contender Lewisfield for interference in deep stretch.

Laki has competed in each of the first four legs of the MATCH Series and leads the division with 23 points, four more than Lewisfield. Also winner of the 2017 Not For Love Stakes at Laurel, where he is six-for-nine lifetime with two seconds, the 5-year-old Cuba gelding was sixth in this year’s Maryland Sprint.

“He came out of the last race well. I was worried when they made contact, his hind end kind of kicked out a little bit and when you’re running at that speed to have that kind of jarring action is worrisome,” said Dilodovico, who won the 2013 De Francis with Immortal Eyes. “But, he came out of it well we got a couple decent breezes in him, and hopefully nothing silly happens. It’s a pretty solid race but he’s doing well so we’ll give him a shot.”

Linda Zang’s Maryland homebred Lewisfield will also be back for another try in the De Francis. The speedy son of Great Notion won this year’s Not For Love and rallied to be third in the Maryland Sprint after a troubled start. Based at Charles Town with trainer Jeff Runco, the 4-year-old has never been worse than second in six tries at Laurel, four of them wins.

“He came out of the race fine, he’s been training well and he’s had a couple of nice workouts between now and then. He likes Laurel, so we’ll bring him down there and see how he does,” Runco said. “This will be a very competitive race … but I think he’s got a graded-stakes with his name on it out there.”

Four Horsemen Racing Stable and Lady Lindsay Racing Stables’ Grade 1-placed 4-year-old Sweetontheladies, a stakes winner at 2 and 3, will be racing for just the second time outside his native Florida. Though winless in eight starts this year, the Twirling Candy colt ran third but was placed second in the Smile Sprint (G3) June 30 at Gulfstream Park and finished third behind impressive winner Imperial Hint in the Vanderbilt.

“We were very proud of his effort that day. Considering how far back he was and how much ground he made up, it leads you to believe that in the right circumstances anything is possible,” trainer Henry Collazo said. “It was a big effort and he’s feeling good and he’s very honest. He tries every time. Every time he didn’t hit the board he had an excuse. He always shows up.”

Hall of Famer Gary Stevens is named to ride from Post 2.

Another multiple stakes winner is Natalie Baffert’s The Man, who annexed his second straight Banjo Picker Sprint Sept. 1 at Parx and owns 10 wins from 15 career starts. Third in the Hockessin for trainer John Servis, it will be the 6-year-old gelding’s graded-stakes debut breaking from Post 7 under Jorge Vargas Jr.

Rounding out the De Francis field are Grade 3-placed Mr. Crow, fourth in the Vanderbilt and fifth as the favorite in the Tale of Cat in his two most recent efforts; Maryland Coalition Stakes winner Colonel Sharp, cross-entered in the Laurel Dash; and Arthur’s Hope.