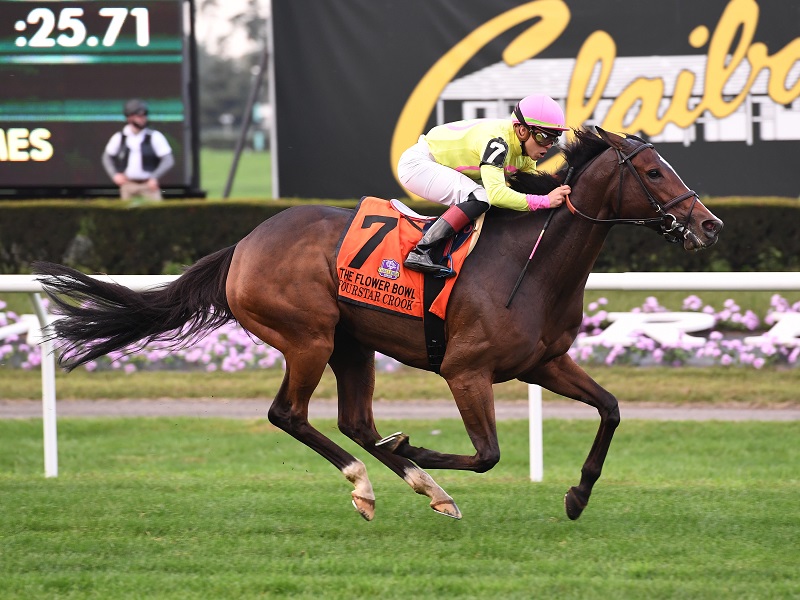 ELMONT, N.Y. - The fourth time was the charm for Fourstar Crook on Saturday at Belmont Park, finally nabbing the Grade 1 that has eluded her with a last-to-first victory over stablemate Onthemoonagain in the $500,000 Flower Bowl to punch her ticket to the Breeders' Cup Filly & Mare Turf.

It was the first Grade 1 for the 6-year-old Freud mare following three near misses in the last 12 months, with a third in the E.P. Taylor last fall, and a pair of seconds to fellow Brown trainee Sistercharlie in the Jenny Wiley and Beverly D. this spring and summer.

Fourstar Crook got away from the gate under jockey Irad Ortiz, Jr. and settled at the back of the pack as Feeling Bossy led the field of seven through an opening quarter-mile in 25.71. The leader began to pull away after an easy half in 51.72, while Onthemoonagain began to advance through the field up the backstretch, moving into second as six furlongs went in 1:15.80.

Onthemoonagain, ridden by Hall of Famer Javier Castellano, grabbed the lead with a three-wide move at the top of the stretch, but all eyes were on Fourstar Crook, beginning her rally from the back. Ortiz directed his charge into the clear and Fourstar Crook responded with a sustained rally to sweep past her stablemate at the sixteenth pole for a two-length win.

"She flew home," said Ortiz. "She was going so comfortable and when I asked, she just exploded."

Winner of the Grade 2 New York and Grade 2 Hillsborough at Tampa Bay Downs this spring, Fourstar Crook improved her record to 12-4-1 from 19 starts and boosted her lifetime earnings to $1,604,566.

It was the fifth Flower Bowl win for trainer Chad Brown, who campaigns Fourstar Crook for Michael Dubb, Bethlehem Stable, and Gary Aisquith.

"This horse ran super," said Brown. "We expected a short field and that the pace wouldn't be that strong, and it wasn't, but she was able to overcome it. She's a really consistent horse and she particularly likes Belmont. She ran to her odds. She seemed very deserving to finally win a Grade 1. When you look at who she's beaten when she's not in Grade 1s, and who she's lost to by short margins, this filly is very deserving to finally achieve that and remarkable at age six."