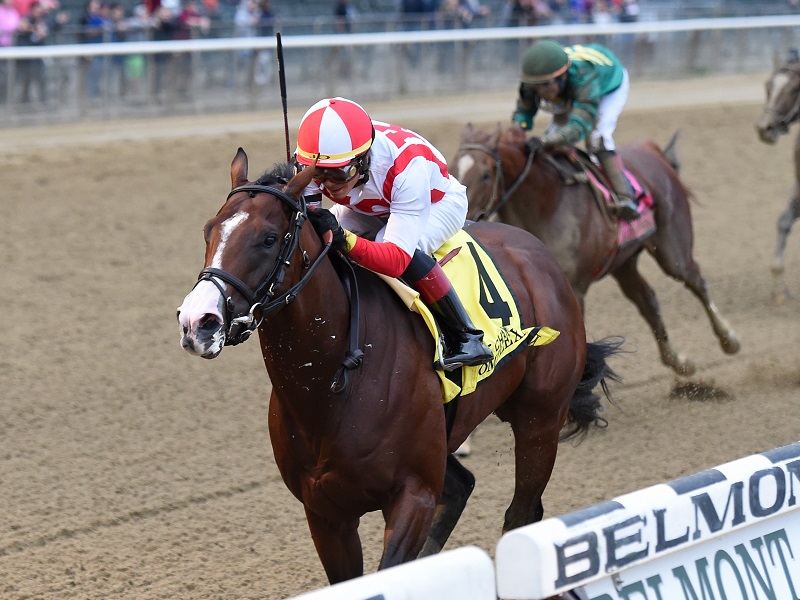 ELMONT, N.Y. - Klaravich Stables' Complexity built on his stellar debut and earned a trip to Breeders' Cup in the process, going gate to wire to post a three-length victory in the 147th running of the Grade 1, $500,000 Champagne for 2-year-olds on Saturday as part of the October Festival of Racing at Belmont Park.

Jockey Jose Ortiz sent Complexity to the front, where he led the 10-horse field through the opening quarter-mile in 22.51 seconds and the half in 45.31 on the fast main track. Ortiz continued to urge Complexity out of the turn, where he geared down and outkicked Code of Honor, completing one mile in a final time of 1:34.63.

The last of four stakes on a loaded card, the Champagne win earned Complexity a berth in the Breeders' Cup Juvenile on November 2 at Churchill Downs. The Maclean's Music colt also earned 10 points towards the 2019 Kentucky Derby for trainer Chad Brown.

"He's just so strong. An outstanding talent. He's just a rare horse," Brown said. "Obviously, we're going to the Breeders' Cup if he comes back sound and healthy. We'll try and run two turns, which will be another question mark. It's another sixteenth of a mile, but he's a class horse. Jose gets along with him well, and hopefully he'll get a good trip in [that] race."

"We have to talk about him now. He won a Grade 1 with the best 2-year-olds we have in New York, and now we have to go compete in the Breeders' Cup with the ones in California and Kentucky and everywhere else," said Ortiz, who won four races total on the day, including aboard Brown trainee Wow Cat in the Grade 1, $400,000 Beldame in Race 8. "The way he did it was very easy and we're happy with his performance.

Complexity, purchased for $375,000 at the 2017 Keeneland September Yearling Sale, was coming into his first stakes start off a 4 ½-length win at six furlongs on September 3 at Saratoga Race Course. The 5-2 favorite returned $7 on a $2 win wager and added his name to an illustrious list of Champagne winners that includes Triple Crown winners Seattle Slew and Count Fleet as well as fellow Hall of Famers Alydar, Spectacular Bid, Easy Goer, Riva Ridge and Buckpasser, among others.

"At the break, as soon as he left the gate he stumbled pretty bad coming out of there. I had to go to Plan B," Cancel said. "I had to sit on the horse and just try to get him comfortable and make one move. The horse ran awesome to honest. He gave me his all. He kept on going and we just couldn't run down the winner, but he never stopped. He kept on trying and trying."

Call Paul edged Brown trainee Aurelius Maximus by a nose for third. As part of the "Road to the Kentucky Derby" series, the top four finishers were awarded a points distribution of 10-4-2-1 towards the 2019 Run for the Roses.