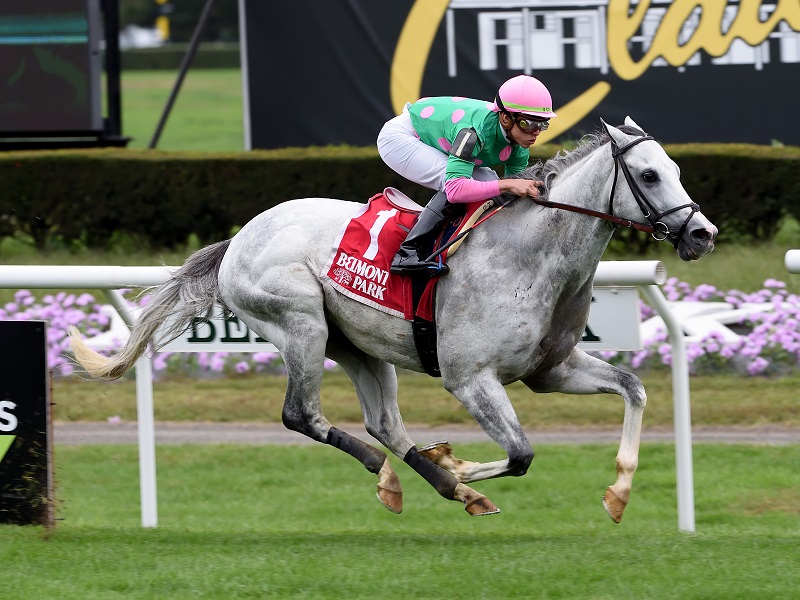 ELMONT, N.Y. - Trainer Christophe Clement enjoyed a successful October Festival of Racing on Saturday at Belmont Park, saddling Disco Partner to an impressive victory in the $150,000 Belmont Turf Sprint Invitational followed two races later by Have At It, an 11-1 upset winner of the Grade 2, $500,000 Hill Prince.

Patricia Generazio's homebred Disco Partner reaffirmed his status as a top turf sprinter, besting a field of six for his second straight win in the Belmont Turf Sprint. It was his first start since finishing third in the Grade 3 Troy Handicap this summer at Saratoga Race Course.

Breaking from the rail as the odds-on favorite with Irad Ortiz, Jr. aboard, the 6-year-old New York-bred stalked from fourth as stablemate Pure Sensation darted to the front, setting fractions of 21.97 seconds for the opening quarter mile and 45.08 for the half.

With five furlongs completed in 56.84, Disco Partner made his way to the front at the three-eighths pole and exploded away from Pure Sensation in the stretch, extending away to the wire to win by 5 ½ lengths.

The final time for the six-furlong distance was 1:08.50 on an inner turf course listed as good.

"He made me feel very confident on top of him," Ortiz said. "When I asked him, he was there for me. He was traveling perfect and then I smooched on him at the three-eighths pole and he took off right away for me. I knew he was going to be there for me. He's a fighter. He always shows up."

Returning $4.20 for a $2 win wager, the son of Disco Rico picked up his 11th win from 26 career starts, boosting his career earnings to $1,264,810. Clement said Disco Partner will likely target the Breeders' Cup Turf Sprint on November 3 at Churchill Downs. He finished third in last year's edition at Del Mar. Pure Sensation, winner of the 2016 Belmont Turf Sprint, was fifth in last year's Breeders' Cup.

"[It's] a great credit to their program, Mr. and Mrs. Generazio. He's getting older, but he's still one of the best, if not the best sprinter, in New York, and I thought it was a very impressive performance," said Clement. "Irad was not too hard on him, which is great. As long as he comes back in good shape, we'll get him ready for the Breeders' Cup. I don't like to have too hard of a race before the Breeders' Cup, so I was very happy with the performance today."

Clement applauded the performance by third-place finisher Pure Sensation, also owned and bred by Generazio, adding that he is possible for the Breeders' Cup Turf Sprint as well.

"He actually ran very well," said Clement. "It's not really his best ground, and he ran really good and got caught in the last furlong. We'll see how he comes out of it. He could be a possible as well. I'll ask Mr. and Mrs. Generazio. It's a good position to be in."

Blind Ambition closed well to earn second and following Pure Sensation in third was Proforma, Gidu and Pocket Change to complete the order of finish. Simon Bar Sinister and Maniacal were scratched.

Clement picked up where he left off two races later with Robert S. Evans' Have At It, who closed from third to secure a one-length win in the Hill Prince for 3-year-olds at 1 1/8 miles on the inner turf.

Have At It was comfortably placed in third along the hedge by David Cohen as Sand Dancer took advantage of a slow early pace, leading through fractions of 24.94 and 49.57. Have At It, a chestnut colt by Kitten's Joy, remained unhurried as Sand Dancer pulled away by five lengths after six furlongs in 1:13.71.

Cohen and Have At It began to chip away at the pacesetter's lead, moving into second with a three-wide move in the far turn. Sand Dancer and jockey Joe Bravo tried to hold off his challenger, but Cohen angled his charge to the inside near the eighth pole and closed with a steady run to stop the clock in 1:50.52.

Have At It, a Silver member of the NYRA Starter Loyalty Program, returned $24.20. It was the first stakes win in three tries for the homebred, following a sixth-place finish in the Grade 2 Hall of Fame on August 3 and a close second in the Better Talk Now on August 27, both at Saratoga.

"He's always been a nice horse. It took us a while to figure him out," said Clement. "Every time he's been ridden forwardly this year, he's run very well. Every time he's been taken back he's run disappointingly. His race in Saratoga [Better Talk Now] was a good race. He probably should have run with a better trip. His allowance race here as well [July 5] was a very good race as well and today he ran great."

Prioritize was third, followed by March to the Arch, 2-5 favorite Raging Bull, Golden Brown, and Cullum Road. Ride a Comet was scratched.