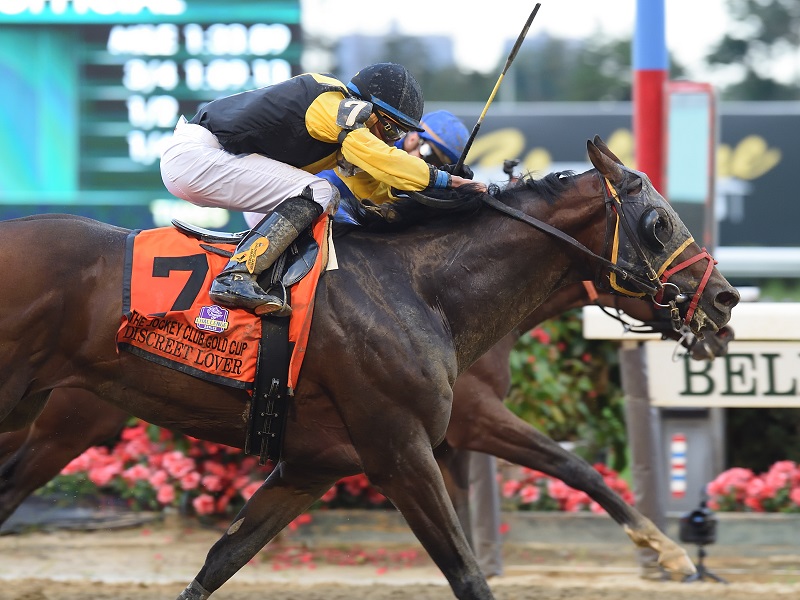 ELMONT, N.Y. - New York-bred millionaire and 3-5 favorite Diversify may have stubbed his toe in his attempt to win back-to-back editions of the Grade 1, $750,000 Jockey Club Gold Cup, but Uriah St. Lewis' Discreet Lover was there to collect the spoils in unforgettable fashion, charging late to post a 45-1 upset in the centennial running on Super Saturday at Belmont Park.

Diversify, ridden by Irad Ortiz, Jr., took up his customary position at the head of the field, but was soon joined by European invader Mendelssohn, moving early under jockey Ryan Moore to press the heavy favorite through a fast opening quarter-mile in 22.72 seconds.

Drawing well ahead of the rest of the field, the pair continued their two-horse race through a 45.64-second half-mile up the backstretch with Diversify gaining some separation from his challenger as they approached the far turn, holding a length advantage as six furlongs went in 1:09.13.

Mendelssohn and Moore kept to task through the turn and Ortiz came up empty when asking for run from Diversify at the top of the lane, finally yielding his lead around the eighth pole. Mendelssohn was quickly engaged on the outside by Group 1 Dubai World Cup winner Thunder Snow, who made a strong move down the lane, and Discreet Lover, charging down the middle of the track under jockey Manny Franco.

Mendelssohn gave way on the inside of Thunder Snow, but Thunder Snow was unable to hold off Discreet Lover's wide rally, getting his neck down in the shadow of the wire to give owner-trainer Uriah St. Lewis his first Grade 1.

With the Grade 3 Excelsior in April his only other win of the year, Discreet Lover has enjoyed a quietly solid season, finishing fourth this spring in both the Grade 3 Pimlico Special and Grade 1 Metropolitan Handicap. This summer, he recorded back-to-back thirds this summer in the Grade 2 Suburban Handicap and Grade 1 Whitney, both won by Diversify, before finishing 12th in the Grade 1 Woodward on September 1 at Saratoga Race Course.

"This horse always gives me all he has," said Franco. "I knew I had a lot of horse under me. I was hoping they would come back to me and they did. I just need to get there one day and today was the day. He always hits the board."

The $412,500 winners' share of the Gold Cup purse nearly doubled Discreet Lover's 2018 earnings and made a millionaire out of the hard-knocking Florida-bred, pushing his career earnings to $1,354,060. Discreet Lover, a 5-year-old son of Repent, also earned an all-fees-paid berth to the Breeders' Cup Classic as part of the "Win and You're In" qualifying series.

"It's the first Grade 1 for the horse and myself," said St. Lewis. "He did it all. All I want to do is go cash my ticket. He can come flying. The wire came right when we wanted it to come. It was great. But I want to go back and spend some time with him. Let's see how he comes out of it, and then we'll go from there. One step at a time. But everything is paid for [for the Breeders' Cup], so we don't have to worry."

Thunder Snow, making his first start on the dirt since setting a track record in the World Cup in March, finished 1 ¾ lengths ahead of Mendelssohn in third. Carlino was another 2 ½ lengths back in fourth, just ahead of Diversify.

"The track was fast and I had to go harder than usual because Mendelssohn was very quick out of there, and I needed to make the lead," said Ortiz. "I had to use a lot to make the lead. We just went a little fast."