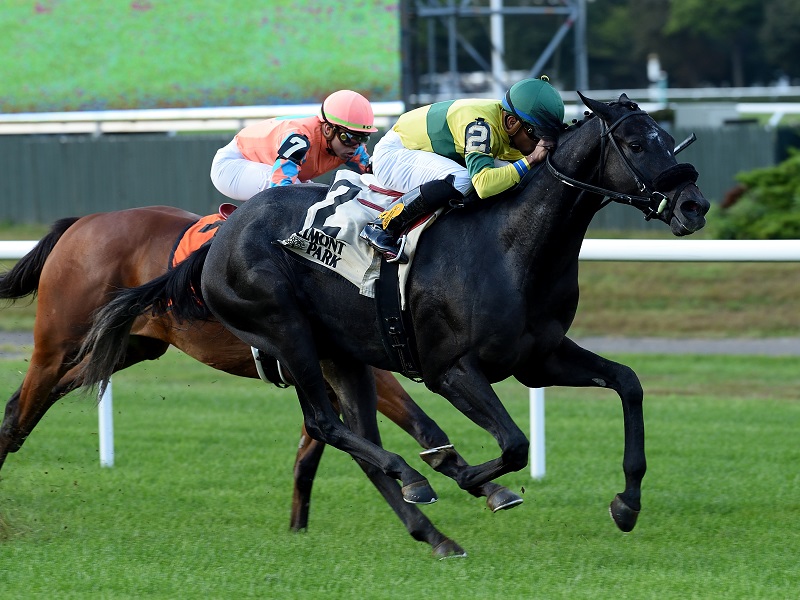 ELMONT, N.Y. - Making his graded stakes debut after breaking his maiden on the turf at Saratoga Race Course, August Dawn Farm's Forty Under closed late in the stretch to win the Grade 3, $200,000 Pilgrim on Saturday at Belmont Park.

Breaking from post 2 with Manny Franco aboard, Forty Under stalked comfortably along the rail in fifth-position as 70-1 longshot Ole Mole led the field of 10 through swift fractions of 23.97 seconds for the opening quarter-mile with the half in 48.84.

At the quarter-pole, Forty Under was shifted from the rail to the four-path. Set down in anall out drive at the top of stretch, he surged past Social Inclusion at the eighth-pole and battled Somelikeithotbrown to the wire, securing the victory by three-quarters of a length.His final time for the 1 1/16 miles distance was 1:44.37 on a yielding inner turf course.

"I expected to be closer to the pace, but the horse broke a step slow, so I used plan B, stay inside, save some ground and wait for the moment," said Franco.

"He's a different horse on turf. He loves it. (After his debut race), I told the trainer, put him on the grass. That's what we did and he won at Saratoga."

Returning $10.80 for a $2 win wager, the Uncle Mo colt picked up his second career and consecutive victory since breaking his maiden last out on August 25 at Saratoga Race Course. The victory boosted his career earnings to $157,386.

"After his maiden race, he took the right steps forward," said winning trainer Jeremiah Englehart. "I thought Manny [Franco] did a great job taking him a little bit off the hot pace and the horse closed and did well."

"One advantage he has even on the softer turf, he's not a real big thick horse. He's slender, good size, but still pretty sleek, not a big horse. He's a nice horse. It was nice because in a maiden race, it's always a pretty big advantage sometimes to be in the clear. Even on the turf, you want to be in that first tier [because] you don't know how they're going to handle everything in the back. We were going to be forwardly placed. We had the inside from where we were [but] you want to be out and you don't want to be shuffled back. He backed him off the horse and Manny made the right adjustments to win the race."