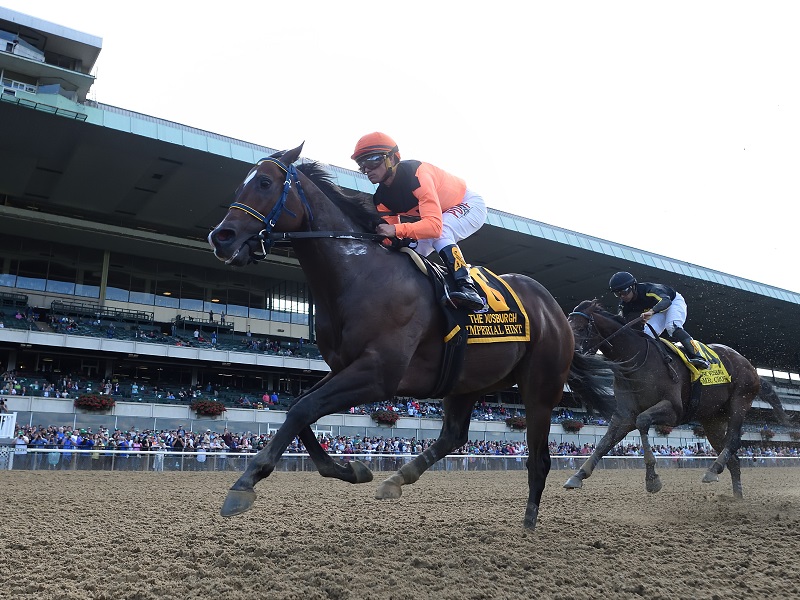 ELMONT, N.Y. - Grade 1 victories are rarely won any easier than Raymond Mamone's Imperial Hint, who went gate to wire to win the $350,000 Vosburgh by 1 ¼ lengths over the fast main track under Hall of Fame jockey Javier Castellano on September Super Saturday at Belmont Park.

The 5-year-old son of Imperialism recorded his second consecutive Grade 1 victory and did so in equally impressive fashion as his 3 ¾-length victory in the Alfred G. Vanderbilt Handicap on July 28 at Saratoga Race Course. In addition to the $192,500 winner's share of the purse, the Luis Carvajal, Jr.-trained multiple graded stakes winner earned a berth to the Breeders Cup Sprint on November 3 at Churchill Downs as part of the "Win and You're In" series.

"We wanted to try to get an easy race before the Breeders' Cup as a prep, because you don't really want to go into that race having to run really hard and I was happy the way the field for this race came out," said Carvajal. "You always worry, especially when you're 1-5, 1-9, but the way he did it was good. I was a little worried at the end, hoping that Javier [Castellano] didn't hold him back too much, but the track is fast, and I couldn't ask for anything else from this little horse he was great."

After being brushed by an outward veering Silver Ride at the start, Castellano sent Imperial Hint to the lead for the first time since the Grade 2 Churchill Downs on the Kentucky Derby Day undercard three starts back, in which he tired to sixth atop the sealed, sloppy going.

In the Vosburgh, the Florida-bred coasted through an opening quarter in 22:09 seconds, and then timed a half-mile in 44.37, while Mr. Crow stalked the leader a length behind. Silver Ride held third, ahead of Still Krz, Forge, Sightforsoreeyes and Manaical.

In the stretch, Imperial Hint began to take the race under his own tactics and stretched his lead to 3 ½ lengths with five furlongs run in 55.78, while Mr. Crow tried to get to him from his outside. Imperial Hint advanced towards the wire while Castellano looked back to gauge his advantage and geared his horse down to the wire. Mr. Crow held the runner-up spot, 3 ¾ lengths ahead of third-place finisher Silver Ride.

The 1:08.27 six-furlong winning time aboard the unhurried winner was .25 seconds off the stakes record set by two-time Vosburgh winner Private Zone in 2013.

"We talked about how the track was playing before the race," said Carvajal. "I thought the 7 horse [Still Krz] was the one who was going to show a lot of speed, but he didn't come out of there, so we had no choice but to go ahead and go. You don't want to choke him too much to keep him behind horses so him on the lead was the way it worked out."

The Vosburgh was Imperial Hint's fourth victory from five starts this year, which began with the Sprint Stakes on March 25 at Tampa Bay Downs and the Grade 2 True North on June 8 at Belmont Park before his victory in the Vanderbilt.

Castellano, who again was a silent passenger aboard the horse he rode for the eighth consecutive time in the Vosburgh, earned his third career Vosburgh victory after winning with Ghostzapper in 2003 and Rock Fall in 2015.

"He's a very nice horse," Castellano said. "You can do whatever you think; you can go to the lead, or come off the pace a little bit. Today, I felt he was the fastest horse. I tried to dictate the pace and control the race. He's a special horse. We were looking for a little workout and looking for the big picture, the Breeders' Cup. I just enjoyed the ride."

Now with 12 victories from 17 career starts, the earner of $1,402,655 will likely return to start in the Breeders' Cup Sprint, a year after he was caught in the stretch drive to finish one-length behind Roy H at Del Mar.

"I think three-quarters is his game. We'll see how he comes out of this race, but we'll most likely ship to Kentucky 10 days before the race."

Rounding out the finish was Sightforsoreeyes, Still Krz, Manaical, and Forge.