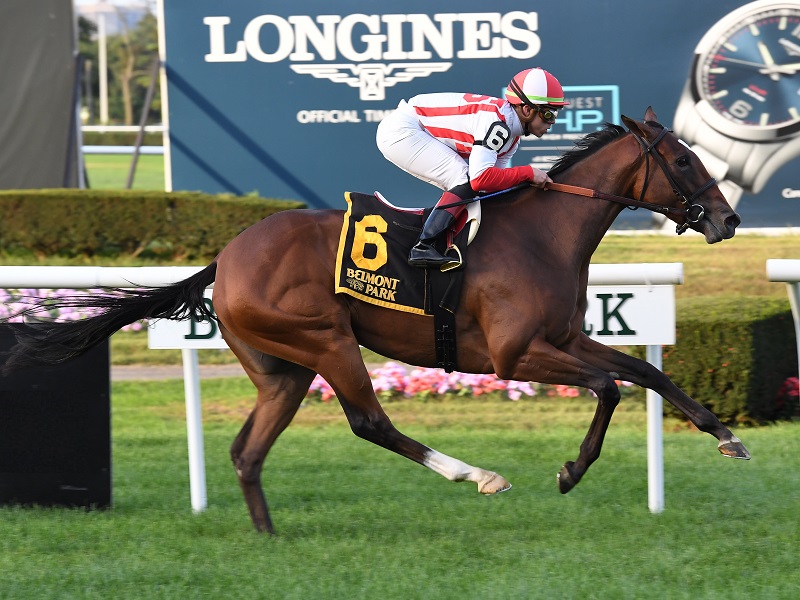 ELMONT, N.Y. - Klaravich Stables' Newspaperofrecord made a strong impression in a maiden-breaking debut last month and was even more impressive in her stakes debut, going gate-to-wire and pulling away in the stretch for a 6 ½-length romp in the 39th running of the Grade 2, $200,000 Miss Grillo for 2-year-old fillies on Sunday at Belmont Park.

Newspaperofrecord, who won her first start on yielding turf by 6 ¾ lengths on August 19 at Saratoga Race Course, broke sharply as Irad Ortiz, Jr. sent her to the front of the nine-horse field, setting early fractions of 23.44 seconds for a quarter-mile with the half in 48.26 on an inner turf course also labeled yielding.

The Irish-bred daughter of Lope de Vega maintained the lead out of the far turn, with Ortiz setting her down as Newspaperofrecord surged to the wire under a right-handed whip, completing 1 1/16 miles in 1:42.11 to improve to 2-for-2.

"I thought she would be forwardly placed," Brown said. "In her debut she was, but I didn't think she'd be on the lead. I'm happy to hear from Irad right now. I was concerned that the first quarter of a mile maybe she was just running on or she wasn't real responsive to the ride or something, but he said, 'No, she just broke well and I let her go with it.' She was always in the race, and as long as that's the case, I'm fine with it.

"I was feeling pretty good turning for home, her ears popped and it looked like she was just galloping. You really never know until you turn them loose. She was loaded and pretty impressive, and he geared her down just in the shadow of the wire. Obviously, we're going to run in the Breeders' Cup, so hopefully she didn't do much today."

Newspaperofrecord paid $4 on a $2 win wager as the even-money favorite. She more than doubled her career earnings to $156,750.

"Our plan was try to relax her and finish, but she broke so sharp and I didn't take anything away," Ortiz said. "She put me right there and made the lead so easy. She was relaxed on the lead, so I took it and it was good for us."

Varenka, a Graham Motion trainee coming off a second-place finish in the P.G. Johnson on August 30 at the Spa, rallied for a second straight runner-up effort, outkicking Stellar Agent by 1 ¾ lengths.

Dogtag, the winner of the P.G. Johnson also trained by Brown, finished fourth. Miss Technicality, No More Fast Women, Virginia Eloise, Kitty's Legacy and Decorated Ace completed the order of finish. Takecharge Mirella, entered for the main-track only, was scratched.