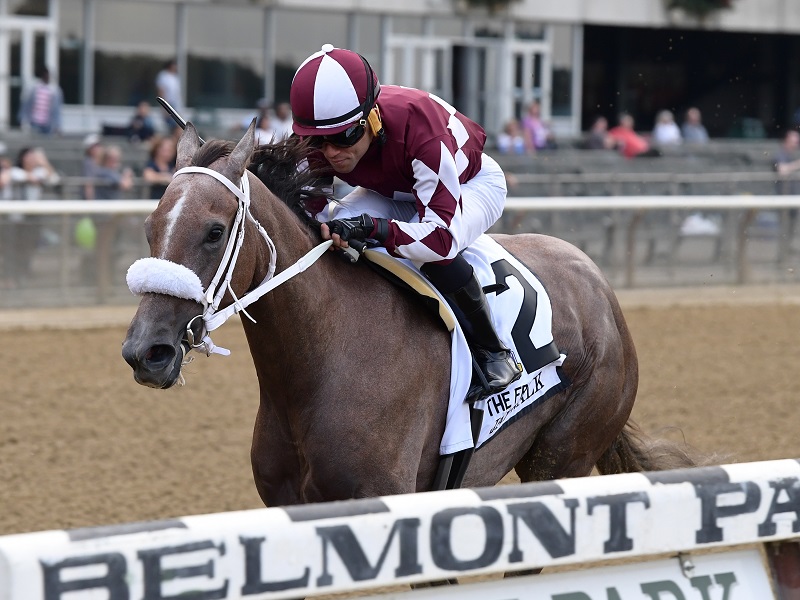 ELMONT, N.Y. - Jaywalk authoritatively answered the questions of handling a stretch out in distance, surging to the front and finishing strong for a 5 ¾-length win in gate to wire fashion in the 71st running of the Grade 1, $400,000 Frizette for 2-year-old fillies on Sunday at Belmont Park.

One of three "Win and You're In" qualifiers for the Breeders' Cup on Sunday's card, the Frizette earned Jaywalk a berth in the Breeders' Cup Juvenile Fillies on November 2 at Churchill Downs. The Cross Traffic filly, owned by Leonard Green and Cash is King Stable, registered her third consecutive win and second against stakes company while garnering 10 points towards the 2019 Kentucky Oaks.

Out of the gate, jockey Joel Rosario sent Jaywalk to the front, where she led the seven-horse field through the opening quarter-mile in 22.63 seconds and the half in 45.65 on the fast main track. Out of the turn, 3-5 favorite Covfefe made a strong bid from the outside, but Jaywalk, who went three-quarters of a mile in 1:09.71, kept the advantage and gained separation in the stretch. After winning at both five and 5 ½ furlongs, Jaywalk outkicked Brucia La Terra, completing one mile in a final time of 1:34.57.

"I told Joel the speed is there if you need it, but there's plenty of speed in here, if you let her fall out of there, play it by ear," trainer John Servis said. "If the other horses go, sit behind them, she'll do that that's not an issue with her and if they don't go, then put her where you're comfortable.

"I want to see what kind of numbers she ran, and how she comes out of this," he added. "It's obviously a huge effort for her. I don't want to see a huge improvement and wheel her right back in four weeks. We'll see. We'll see how it shapes up."

"She wanted to go to the front," Rosario said. "I thought there was a lot of speed on paper and then John told me just let her break and let her run however she wanted. I just let her go ahead and be happy and she really handled it. She looked like she would keep going at the quarter-pole and her long stride she really handled the trip well.

"I think she'll handle two-turns [going forward] she certainly has the speed to," he added.

Jaywalk, the winner of the White Clay Creek last out on August 22, has already won at three different tracks in Belmont, Delaware Park and Parx.

Brucia La Terra, one of two entries for trainer Barclay Tagg, rallied for second in her stakes debut after winning her first start on August 12 at Saratoga, finishing three-quarters of a length ahead of stablemate Cassies Dreamer for second.

"I was very pleased with how they both ran," Tagg said. "Not bad for 18-1 with Brucia La Terra. We liked them both. They weren't expensive horses or anything like that, but they've certainly been training well. We wanted to run them and we were pleased with the outcome. It costs so much to go to the Breeders' Cup now. I would've love if one of them would've been able to [catch] it, but if you can't you can't. The winner was much the best."