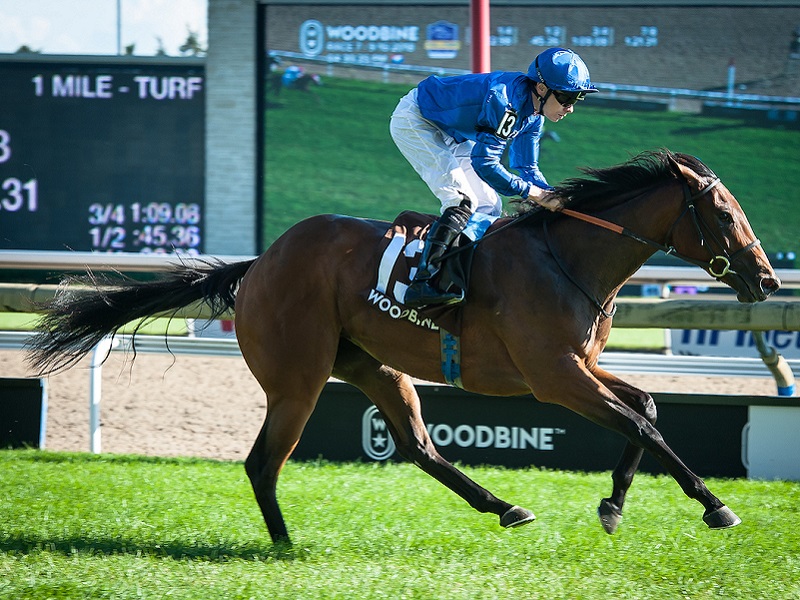 TORONTO, September 16, 2018 — La Pelosa, invading from England for trainer Charlie Appleby, rallied from well back and was in full flight through the stretch en route to a one-length victory in Sunday’s Grade 1 Natalma Stakes at Woodbine Racetrack.

The $250,000 Natalma, a one-mile turf race, is a “Win and You’re In” race and earns La Pelosa an automatic berth in the Grade 1 Breeders’ Cup Juvenile Fillies Turf over the same distance at Churchill Downs on November 2.

La Pelosa, bred in Ireland and racing for the powerful Godolphin outfit, checked in last weekend along with travelling head lass Sophie Chretien and exercise rider Daragh O’Donohue and showed the benefits of her time on the grounds and breeze over the course.

“She did everything right,” said jockey Jamie Spencer, in from England and riding La Pelosa for the first time.

“She did what her U.K. form suggested it would do and the race worked out perfectly,” said Spencer.

“I just got her into her rhythm where she’s happy and let her take it from there. The pace was strong, so I was a little bit farther back than I initially planned but that’s the way it panned out and she was very brave in the straight when I asked her for a full effort.”

Eyeinthesky had sprinted away to the front in the Natalma and held an open lead through fractions of :22.98, :45.36 and 1:09.08 while tracked by Artilena and Stillwater Cove.

The real running had just begun at that point, however, as Stillwater Cove moved to the top with a furlong to run and My Gal Betty, Bold Script and Pivottina launched their bids.

La Pelosa was too much, however, as she hit the wire in 1:33.70 for her first stakes victory.

My Gal Betty raced somewhat erratically through the stretch before finishing well for second as the 5-2 favourite, two lengths before the third finisher.

“We had a good trip,” said My Gal Betty’s jockey Rafael Hernandez. “No excuse about that, we just got beat. My filly ran as hard as she could.”

Bold Script, at 33-1, also finished well to take down third money, a neck before the French invader Pivottina as Stillwater Cove weakened to finish fifth.

Completing the order of finish were Comic Kitten, Souciologist, Eyeinthesky, Not Orbinary, Chasing the Kitty, Above All Names, Chicas Amigas and Artilena.

Bohemian Queen and Mintd were scratched.

La Pelosa had won a maiden race when debuting in England on May 23 and was making her sixth start in the Natalma. Her most recent start overseas came in Newmarket’s Group 3 Sweet Solera Stakes, a race which Capla Temptress used as her springboard to success in last year’s Natalma.

“She’s a lovely filly,” said assistant trainer Alex Merriam. “I think she’s turned a few heads this week. She shipped well, she travelled well, and she’s done everything right, which is a big ask for a two-year-old filly, so we’re really pleased with her.”