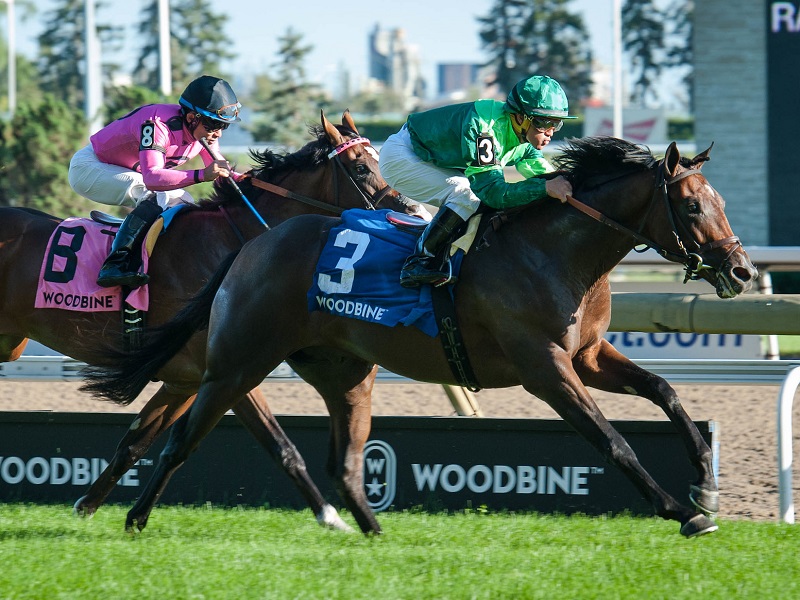 TORONTO, September 16, 2018 – Peter Brant’s undefeated two-year-old colt Fog of War kept his eye on the prize and split horses in the stretch to emerge victorious in the $250,000 Summer Stakes on Sunday afternoon at Woodbine Racetrack.

Jockey Javier Castellano worked out the winning trip in the one-mile turf event to secure the popular Chad Brown trainee a spot in the Breeders’ Cup. Upgraded this year to Grade 1 status, the Summer is part of the Breeders’ Cup ‘Win And You’re In’ Challenge Series offering the nominated winner automatic entry into the 2018 running of the Breeders’ Cup Juvenile Turf on November 2 at Churchill Downs.

Even-money favourite Fog of War stalked in third-place behind local Soaring Free Stakes winner Wallace, who set early fractions of :23.36 and :46.20 while widening to three lengths with War of Will running in second. War of Will reeled in the tiring front-runner and took over command at three-quarters in 1:10 with Fog of War emerging between horses entering the stretch while Nashtrick and Avie’s Flatter rallied outside. Fog of War ran down late leader War of Will at the end of the mile, prevailing by three-quarters of a length and stopping the clock in 1:33.90 to remain undefeated in his young career.

“I put him behind the horses, covered up, and let him see the target all the way in the race,” said Castellano. “I liked the way he split horses at the quarter pole. He’s really a smart horse. When I asked him, he finished really well. These are the kind of horses you want to ride. These kinds of horses have lot of potential.

“I like the way he did it,” he added. “He’s a very talented horse and I think the key was I tried to teach him something for the future, for the next race. It’s the kind of horse that you don’t want to be on the front with everybody chasing, you want to teach him something and let him win the race and go forward. I think he’s got a lot of potential and he’s coming around very well.”

A $400,000 yearling purchase, the War Front-Say colt stretched out to the mile distance with apparent ease after making a victorious career debut going 5-1/2 furlongs over ‘good’ turf at Saratoga on August 13.

“Chad Brown and I looked at this horse and we just liked the way he was made,” said Brant of the colt bred in Kentucky by Orpendale, Chelston & Wynatt. “He was a choice of ours, and he’s really come through. He’s a wonderful horse. Chad and his whole team have done a great job with this horse.

“The fact that he’s bred to go longer, and won at five and a half like that, and showed that burst of speed, that was very encouraging. But, you never know until you get further down the road like here and run in a Group 1… You always hope, and this is a game of great hopes and that’s what keeps us all in.”

“It was a good trip. He broke well, and it looked like the other horse wanted to take the lead so I just travelled with him for a little bit,” said War of Will’s jockey Joel Rosario. “He came home very nice. He responded very well but the favourite came with a strong run on the outside.”

“It was a very good performance. He ran well but the other horse had talent and finished very fast.”