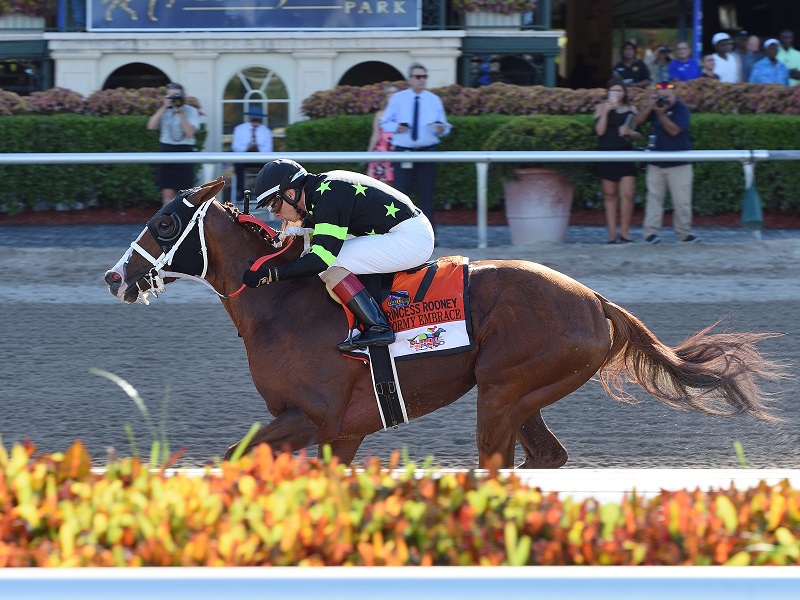 HALLANDALE BEACH, FL – Matalona Thoroughbreds’ Stormy Embrace grabbed an early lead that she would only lengthen through the stretch run of Saturday’s $250,000 Princess Rooney (G2) at Gulfstream Park, earning a fees-paid berth in the $1 million Breeders’ Cup Filly & Mare Sprint with a dazzling 15-1 upset victory.

Trained by Kathleen O’Connell, the 4-year-old daughter of Circular Quay was never threatened at any time during the seven-furlong sprint for fillies and mares, finishing six lengths clear of Rich Mommy while completing the distance in a sharp 1:21.81 under jockey Wilmer Garcia.

“We broke really well and just tried to keep our pace all the way around. I thought a couple horses had more speed than me, but we ended up in the lead,” New Jersey-based Garcia said. “I tried to hold her down as best as I could and let her be free in the stretch.”

Stormy Embrace, who captured the $100,000 Musical Romance Stakes for Florida-bred fillies and mares at Gulfstream May 19 under Garcia, broke alertly from the starting gate and sprinted to the lead through a first-quarter in 22.79 seconds and continuing on to complete the first half-mile in 45.25, chased by Spanish Harlem. Rounding the turn into the homestretch, Stormy Embrace surged clear and cruised to her seventh career victory in 19 starts and her third straight win.

“That was great. She loves the Gulfstream track and the best thing about her is she’s kind of versatile. She can run off the pace or she can run in front,” O’Connell said. “I told [jockey] Wilmer – t he’s ridden the filly so much – to just use his judgment. Right now I think he can fly back to New Jersey without the plane.”

Defending champion Curlin’s Approval encountered considerable traffic after breaking from her rail post position and finished fourth. Rich Mommy, who finished second behind Curlin’s Approval in the Ana T. Stakes at Gulfstream June 3,  rallied from far back to finish three-quarters of a length ahead of third-place finisher My Miss Tapit, who was 2 ½ lengths ahead of Curlin’s Approval.

“We first saw her when she was eight hours old and she’s been a gem. She’s been a wonder for us,” Vuskovich said. “I have to give all the credit to the man who developed her, G. W. Parrish in High Springs. He’s a consummate horseman, and, of course, Kathleen. We’re nothing compared to them. Kathleen has brought this horse along so masterfully.”

“I’ll have to talk to the owner and we’ll definitely have to change a few plans. You know me, I usually look for the easiest spots because that’s what like to do but she deserves it. [The owners] deserve it. They’re very wonderful people,” O’Connell said. “I was very happy when they came into my barn a few years ago and it’s been very productive ever since.”