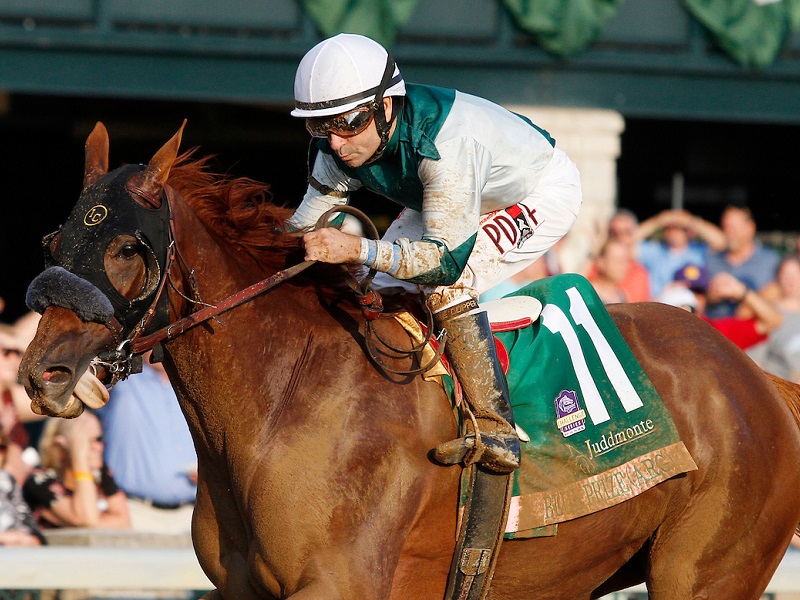 Merriebelle Stable’s Blue Prize (ARG) overcame an adventurous run in the stretch to turn back Champagne Problems by three-quarters of a length to win the 63rd running of the $500,000 Juddmonte Spinster (G1) for fillies and mares before a Sunday afternoon crowd of 14,223.

In the Juddmonte Spinster, longshot Southernperfection led the field of 11 through fractions of :23.79, :47.62 and 1:12.27. On the far turn, Bravo moved to the far outside, circling the leaders and striking the front turning for home.

Blue Prize quickly opened a daylight advantage, but twice before the eighth pole ducked out sharply beyond the middle of the track, allowing Champagne Problems, who was skimming the rail, to reach near even terms. Bravo got Blue Prize straightened out inside the sixteenth pole and drew clear for the victory in 1:50.02.

A 5-year-old Argentine-bred daughter of Pure Prize out of the Not For Sale mare Blues for Sale (ARG), Blue Prize won her fourth graded stakes in North America and first Grade 1. A Group 1 winner in Argentina, Blue Prize elevated her career earnings to $964,753 with Sunday’s $300,000 check.

It was another 3¼ lengths back to Fuhriously Kissed who was followed in order by Chocolate Martini, Talk Veuve to Me, favored Eskimo Kisses, Skeptic, Southernperfection, Tiger Moth and Sassy Sienna.