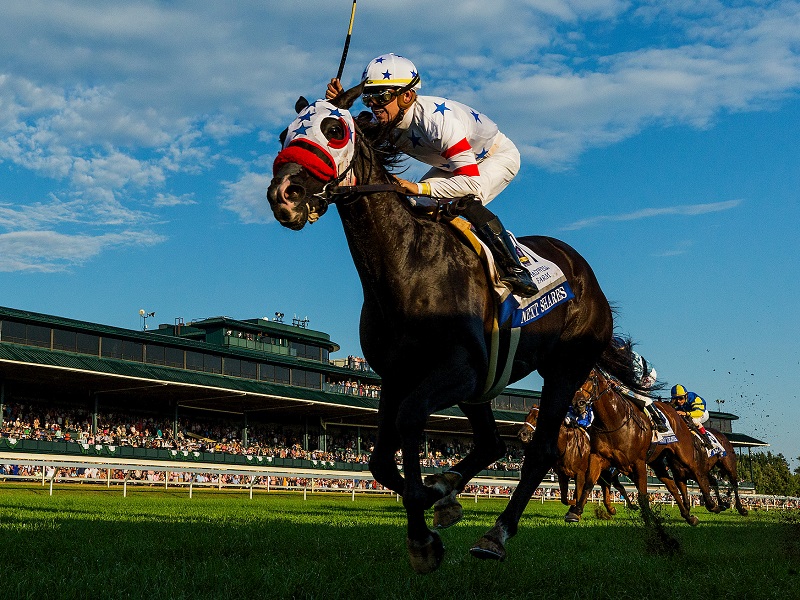 Trained by Richard Baltas and ridden by Tyler Gaffalione, Next Shares covered the mile on a turf course labeled good in 1:36.97 to earn a berth in the $2 million Breeders’ Cup Mile (G1) to be run Nov. 3 at Churchill Downs. He gave Gaffalione his first Keeneland stakes victory.

Other “Win and You’re In” victors were KRA Stud Farm’s Knicks Go in the $500,000 Claiborne Breeders’ Futurity (G1) for 2-year-olds; Michael Dubb, Madaket Stables and Bethlehem Stables’ A Raving Beauty (GER) in the $400,000 First Lady (G1) for fillies and mares; and Juddmonte Farms’ Golden Mischief in the $250,000 Thoroughbred Club of America (G2) for fillies and mares.

In the Shadwell Turf Mile, Heart to Heart and Voodoo Song raced through fractions of :23.37 and :47.14 as Gaffalione bided his time in midpack. On the far turn, Heart to Heart disposed of Voodoo Song and opened a daylight margin turning for home where he drifted slightly to the outside.

Gaffalione took advantage and shot Next Shares through the opening, quickly established command and never was threatened in the run to the wire.

It was another half-length back to favored Analyze It with Big Score, Mr. Misunderstood, Synchrony, Almanaar (GB), Heart to Heart, Multiplier, Bound for Nowhere, Voodoo Song and Imperative following in order.