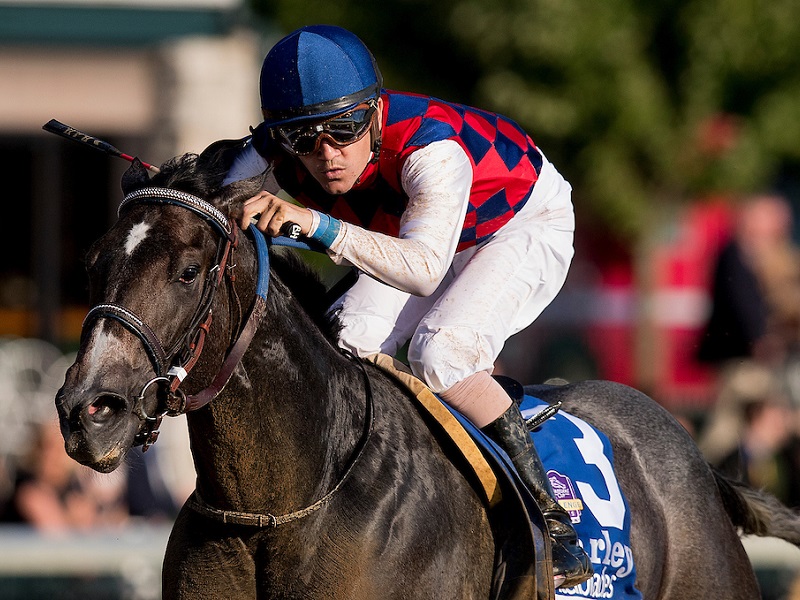 Three Chimneys Farm and Fern Circle Stables’ Restless Rider took over from pacesetting Meadow Dance at the top of the stretch and drew clear to post a 2½-length victory over Reflect to win the 67th running of the $400,000 Darley Alcibiades (G1) for 2-year-old fillies before a Fall Meet opening-day crowd of 15,334.

In the race prior to the Darley Alcibiades, Robert Baron’s Promises Fulfilled held off late charges from Whitmore and Limousine Liberal to win the 166th running of the $245,000 Stoll Keenon Ogden Phoenix (G2) for sprinters by a head over 2017 race winner Whitmore.

Trained by Kenny McPeek and ridden by Brian Hernandez Jr., Restless Rider covered the 1 1/16 miles on a fast main track in 1:44.23. The victory earned Restless Rider a spot in the $2 million Tito’s Handmade Vodka Breeders’ Cup Juvenile Fillies (G1) to be run Nov. 2.

The victory was the fourth in the race for McPeek. His other winners were She’s A Devil Due (2000), Take Charge Lady (2001) and Dream Empress (2008). It was the first win in the race for Hernandez.

Meadow Dance emerged with the lead going into the first turn and quickly opened a daylight advantage over Lady T N T with Restless Rider riding the rail in third through fractions of :22.86 and :46.52.

Going into the far turn, Restless Rider moved to second and swung to the outside of Meadow Dance, assuming command at the head of the lane. Reflect rallied from midpack into second but was no threat to winner.

A Keeneland sales graduate, Restless Rider has won three of four starts for earnings of $401,360, including Friday’s check of $240,000. She won the Debutante at Churchill Downs by 11¼ lengths and in her previous start was second in the Spinaway (G1) at Saratoga.

Restless Rider is a Kentucky-bred daughter of Distorted Humor out of the Unbridled’s Song mare Silky Serenade.

It was 1½ lengths back  to Chocolate Kisses in fourth with Boujie Girl, Malocchio, Abbo, Somewhere, Into Trouble, Bella Ciao, My Wynter Rose, Catherinethegreat, Kim K and Lady T N T following in order.