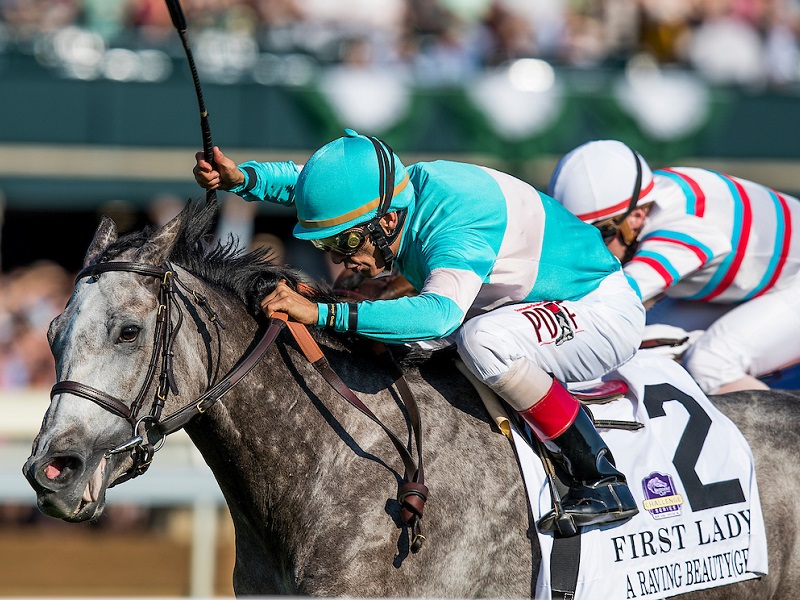 A Raving Beauty grabbed the lead at the break, inched clear at the head of the stretch and then had enough left to hold off Dona Bruja (ARG) by a neck to win the 21st running of the $400,000 First Lady (G1) for fillies and mares Saturday and earn a berth into the $2 million Maker’s Mark Breeders’ Cup Filly and Mare Turf (G1) at 1 3/8 miles on Nov. 3 at Churchill Downs.

Trained by Chad Brown and ridden by John Velazquez, A Raving Beauty covered the mile on a turf course labeled good in 1:37.78. It marked the second victory in the First Lady for Brown and Velazquez, who teamed to win the 2014 running with Dayatthespa.

A Raving Beauty led the field of nine through fractions of :24.40, :49.11 and 1:13.76 with Valadorna, stablemate Quidura (GB) and Crown Walk (GB) in closest pursuit. At the head of the lane, A Raving Beauty slipped away from her rivals and then held on for her second Grade 1 victory of 2018. Previously, she won the Just a Game at Belmont Park.

The victory was worth $240,000 and vaulted A Raving Beauty into millionaire status with a bankroll of $1,018,555 and a record of 22-6-3-3. She is a 5-year-old German-bred daughter of Mastercraftsman (IRE) out of the High Chaparral (IRE) mare Anabasis.

Crown Walk was another neck back in fourth and was followed in order by Valadorna, Insta Erma, favored Quiodura, Off Limits (IRE) and One Liz.