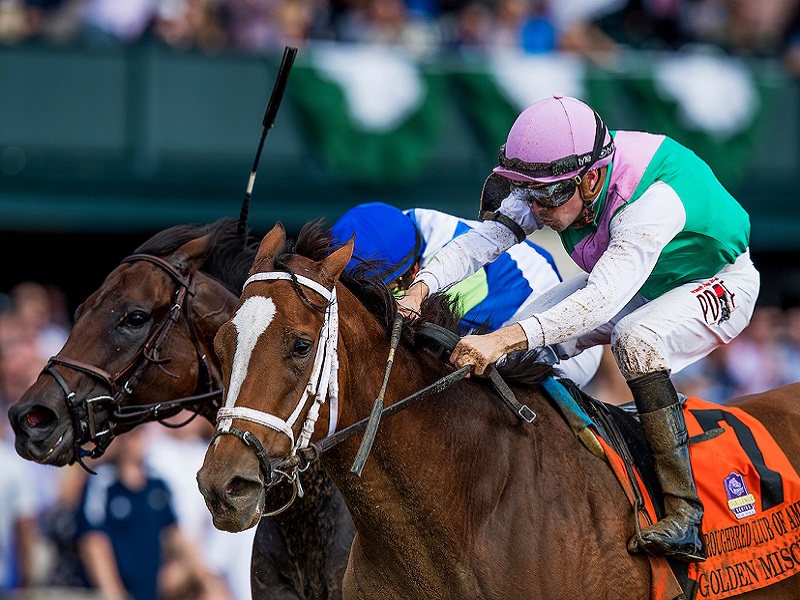 In the Thoroughbred Club of America, Golden Mischief earned a berth in the $1 million Breeders’ Cup Filly and Mare Sprint (G1) to be run at 7 furlongs on Nov. 3 at Churchill Downs by holding off Chalon by a neck.

Trained by Brad Cox and ridden by Florent Geroux, Golden Mischief covered the 6 furlongs on a fast main track in 1:09.39. It was the first victory in the race for Cox and Geroux.

Vertical Oak led the field through fractions of :22.74 and :45.68 with Happy Like a Fool applying token pressure while Chalon raced three wide and Miss Sunset rode the rail in fourth.

Approaching the stretch, Golden Mischief was fifth. In the lane, Geroux took Golden Mischief to the inside and split Vertical Oak and Miss Sunset to forge to the lead and have enough left to hold Chalon, who finished second in the race for the second consecutive year.

An objection lodged against Golden Mischief by Vertical Oak’s jockey for interference in deep stretch was disallowed by the stewards.

The victory was worth $150,000 and increased Golden Mischief’s earnings to $668,150 with a record of 21-10-3-0. Golden Mischief is a 4-year-old Kentucky-bred daughter of Into Mischief out of the Carson City mare Lanai City.

Favored Miss Sunset finished another neck back in fourth and was followed in order by Happy Like a Fool, Awestruck, Rich Mommy, Curlin’s Approval, Torrent and Crazy Sweet.