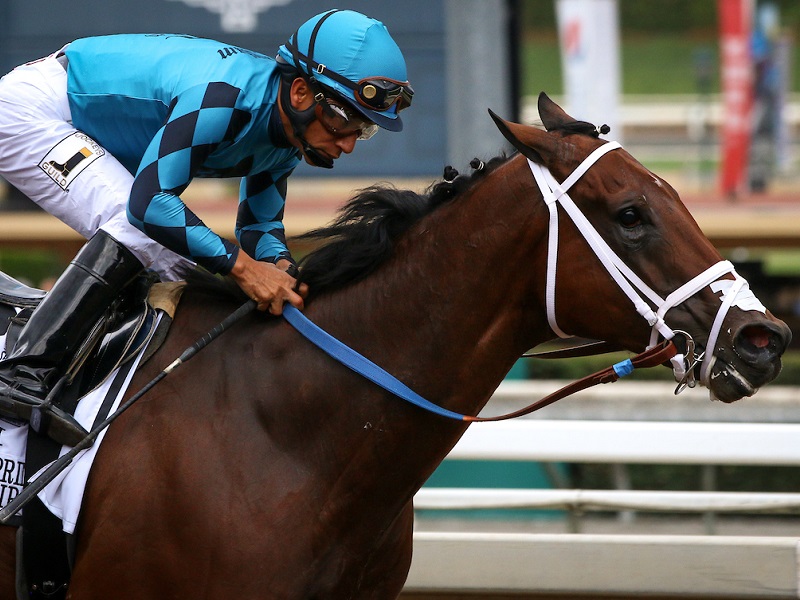 ARCADIA, Calif. (Oct. 6, 2018) – Favored Roy H stalked his prey while a close third heading into the far turn, floated primary rival Ransom the Moon five-wide at the top of the stretch and successfully defended his title in the Grade I, $300,000 Santa Anita Sprint Championship Saturday, winning by 2 ¾ measured lengths over stablemate Distinctive B.  Reunited with eastern-based Paco Lopez and trained by Peter Miller, Roy H got six furlongs in a sizzling 1:09.09 and will now look to defend his crown in the Grade I Breeders’ Cup Sprint on Nov. 4.

With Distinctive B and Drayden Van Dyke on the engine from the break, Roy H, who came off a disappointing second to Ransom the Moon in the Grade I Bing Crosby Stakes July 28 and was subsequently sent to train with Miller at San Luis Rey Downs, was full of run early as he sat just to the outside of both the winner and longshot Horse Greedy before engaging for the lead a quarter mile from home.

“Ruben (Alvarado), my assistant, has done a phenomenal job with him up here for two years, but he just seemed stale to me,” said Miller of his 2017 Eclipse Award winning Sprinter.  “I think he just needed a change of pace and a change of scenery, so we brought him back to San Luis Rey.  I think it’s picked his head up a bit.  This is the Roy H I’ve been waiting to see all year…He’s a great horse and I hope to springboard this to the Breeders’ Cup.”

Owned by Gary Hartunian’s Rockingham Ranch, Roy H, who is out of the Elusive Quality mare Elusive Diva, had been ridden by Kent Desormeaux in his last five starts, last tasted victory three races back in Santa Anita’s Grade II Palos Verdes Stakes on Feb. 3, which preceded a second place finish in the Group I Duabai Golden Shaheen two starts back on March 31.

“I loved to get the chance to ride this horse again,” said Lopez.  “I won on him in New York (True North Stakes, June 9, 2017) and was second in California (Grade I Bing Crosby on July 29, 2017), so I know the horse very well.  He was very light-footed today but I didn’t want to send him, so I waited a little bit.  He’s an easy horse to ride, you can place him pretty much anywhere…”

Ridden by Drayden Van Dyke, Distinctive B, who finished a diminishing half length in front of Ransom the Moon, was off at 10-1 and paid $5.80 and $2.80.

Ransom the Moon, last of the quintet heading into the far turn, seemed to get a bit discouraged when packed wide by the winner off the turn for home, finished willingly while galloping out in front on the Club House turn.

“He needs more pace,” said Prat.  “It’s hard for him to make up ground when they’re not going that fast.  With a bigger field next time (Breeders’ Cup Sprint), he should have more pace to run at.”