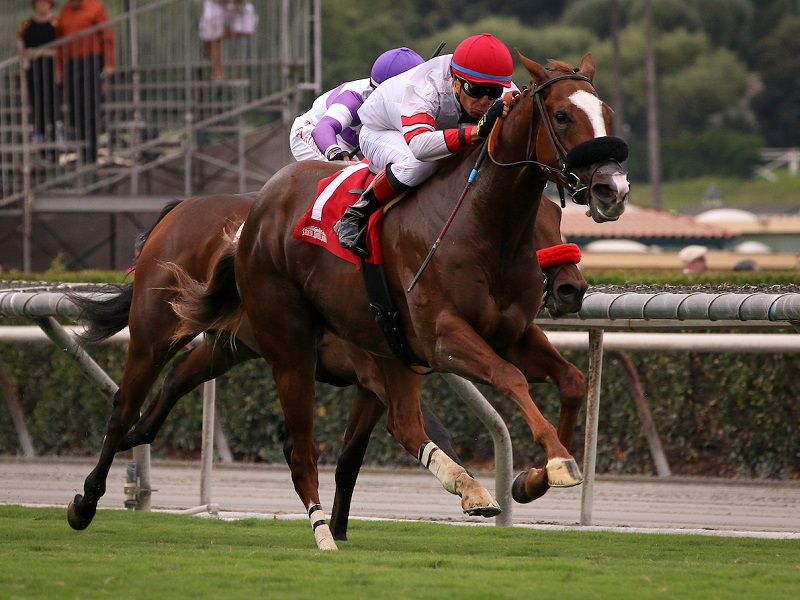 ARCADIA, Calif. (Oct. 6, 2018)–Fresh off a maiden win on dirt Aug. 4, longshot Its Gonna Hurt blasted from his rail post position and never looked back in winning Saturday’s $100,000 Speakeasy Stakes by three quarters of length under Tiago Pereira.  Trained by Brian Koriner, the Louisiana-bred colt by Violence got five furlongs over the Santa Anita turf in 56 flat and punched his ticket to the Breeders’ Cup Juvenile Turf Sprint at Churchill Downs on Nov. 2.

(Run for the first time at five furlongs on turf, the Speakeasy is a Breeders’ Cup “Win and You’re In” Challenge Race, with the winner earning a fees-paid berth to the afore mentioned Breeders’ Cup Juvenile Turf Sprint).

In a racing rarity, Its Gonna Hurt headed a six-horse parade that saw the entire field finish in exact post position order; 1-2-3-4-5-6.

Owned by Janet Lyons, Evan Trommer, Andrew Trommer and Matthew Trommer, Its Gonna Hurt was purchased for $80,000 out the Ocala Breeders 2-year-old in Training Sale this past April.  With the winner’s share of $60,000, he increased his bankroll to $81,945.

Ridden by Evin Roman, Whooping Jay, the lone California-bred in the field, sat second the entire trip, finishing a neck in front of favored Mae Never No.  Off at 10-1, Whooping Jay paid $10.60 and $4.80.

Mae Never No, the lone filly in the lineup, didn’t show her customary early speed and was third throughout under Gary Stevens.  Off at 6-5, she paid $3.00 to show.