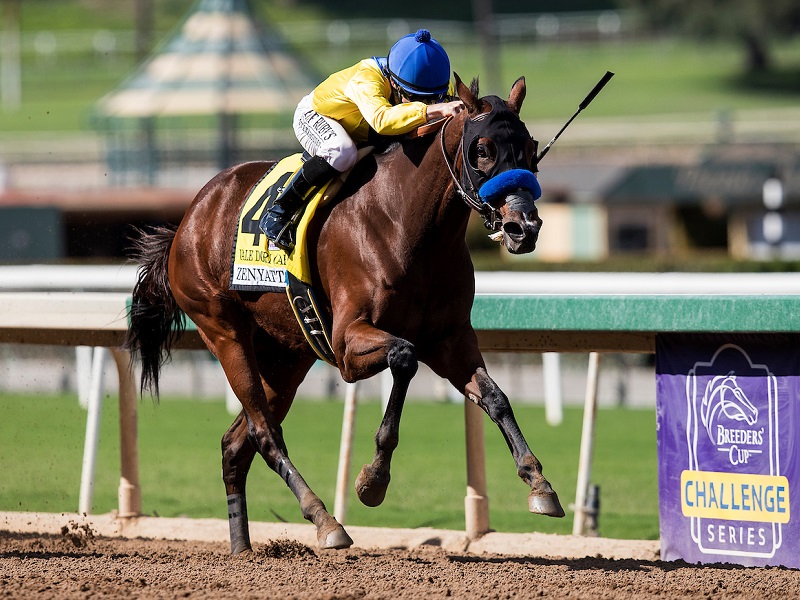 ARCADIA, Calif. (Sept. 30, 2018) – With $474,683 bet to show on her stablemate, 1-9 favorite Abel Tasman, Vale Dori relished the role of being the “Other Baffert” in Sunday’s Grade I, $300,000 Zenyatta Stakes and she responded with an inspired pace-pressing performance under Joe Talamo that saw her defeat late running La Force by three quarters of a length while Abel Tasman finished next to last, beaten 10 ½ lengths.  Off at 11-1 in a field of six fillies and mares three and up, Vale Dori got 1 1/16 miles in 1:44.88.

A Breeders’ Cup “Win and You’re In” Challenge Race, Vale Dori now has a fees-paid berth into the Grade I Breeders’ Cup Distaff at Churchill Downs on Nov. 3.

“I’m worried about (Abel Tasman) because Mike (Smith) said she was lethargic, and she’s up there where all these sick horses are, so I hope she’s not getting sick,” said Baffert, who although Abel Tasman fizzled, still notched his third career win in the Zenyatta.  “…I’m about as shocked as everybody else, but they’ll do that.”

When asked about Vale Dori adding blinkers today, Baffert responded, “She’d been working well, but she hadn’t been getting away from the gate.  If she doesn’t get away well, she doesn’t run well.”

Baffert then addressed Abel Tasman’s demeanor at the starting gate.

“When I saw Abel Tasman break horrible like that, it looked like shades of Arrogate at Del Mar in the (2017) San Diego…She’s never run a bad one.  Mike said she felt sound and all that, but she was just completely lethargic…My main concern is that Abel’s okay and not getting sick on me.”

Although a Group and Grade I winner, Vale Dori, a 6-year-old Argentine-bred mare, was most recently a well beaten second in a restricted one mile stakes at Del Mar on Aug. 24.  Winless in her last six starts, she added blinkers today and paid $24.60, $13.20 and a whopping $40.60 to show.

As for German-bred La Force, she put in her customary late bid and was easily second, finishing 1 ¼ lengths in front of Shenandoah Queen, who was gunned to the early lead.