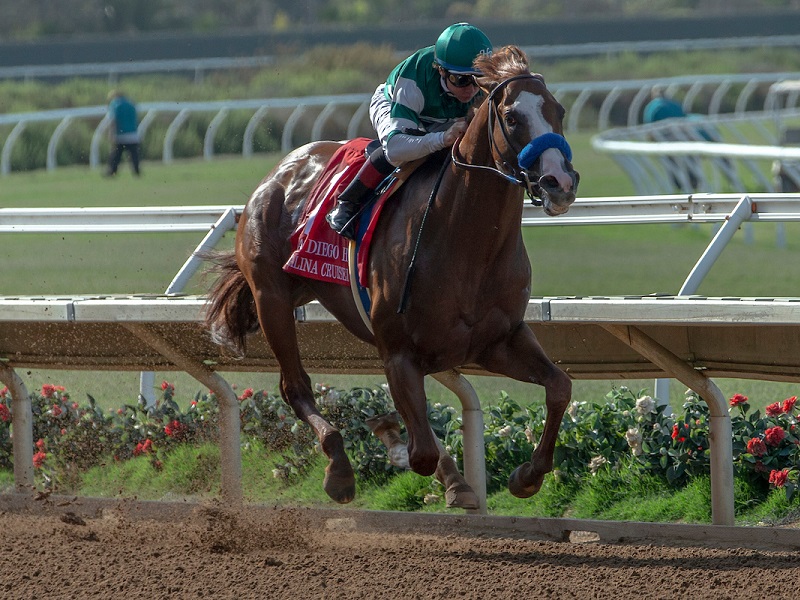 Catalina Cruiser took command from the inside midway down the backstretch, opened up in the upper stretch and cruised to the wire seven and one-quarter lengths in front, running the seven-furlong distance in a quick 1:22.13 while under only mild urging from Van Dyke.

Battle of Midway, competing for the first time since taking the Breeders’ Cup Dirt Mile at Del Mar last November after which he had a brief, unsuccessful stint at stud, ran well in his return to be second, two and one-quarter lengths ahead of Vorticity, with Threefiveindia another five and three-quarter lengths farther back in fourth and last.

Withdrawn from the line-up were Roy H, Ransom the Moon, Horse Greedy and St. Joe Bay.

With only four starters, there was no show wagering for the race which is part of the Breeders’ Cup’s series of “Win and You’re In” qualifying contests.

Catalina Cruiser, a four-year-old son of Union Rags trained by John Sadler, scored his fourth win in as many starts. In his previous outing, he won the San Diego Handicap by six and three-quarter lengths. He returned $2.40 and $2.10, while Battle of Midway paid $2.20 to place. There was a minus place pool of $29,348.

First money of $120,000 increased Catalina Cruiser’s earnings to $303,600. He was a $370,000 purchase as a yearling at Keeneland in 2015. The colt is a stablemate of Accelerate, hero of the recent Grade I $1 million TVG Pacific Classic for the Hronis brothers and Sadler.