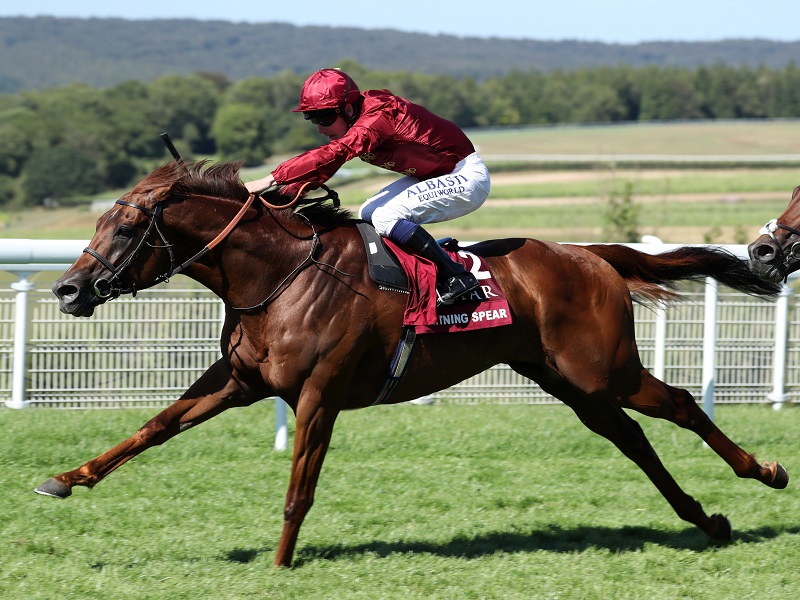 The David Simcock-trained Lightning Spear powered to an impressive victory in today's feature race, the G1 Qatar Sussex Stakes under Oisin Murphy, to end his Group One hoodoo.

Lightning Spear had run in G1 company 15 times before today, with notable efforts including a short-head second to Rhododendron in the G1 Al Shaqab Lockinge Stakes at Newbury in May, 2018.

The seven-year-old son of Pivotal, a dual winner of the G2 Celebration Mile at Goodwood (2016 & 2017), travelled smoothly in fourth in today's mile contest and once finding room in the home straight, quickened up smartly to score by a length and a half.

Simcock, who has also enjoyed Classic success this year with Teppal in the Poule d'Essai des Pouliches at Longchamp, France, was effusive in his praise of the seven-year-old entire's performance.

The Newmarket handler said: "I'm delighted with Lightning Spear. He looked good today, quickened well and travelled well - he did everything properly. Oisin has grown up with the horse, he is a very confident jockey and he was very patient waiting for the gap today. Sheikh Fahad loves this horse and he will be absolutely delighted. Unfortunately, he can't be here today, but he'll be made up.

"Lightning Spear has done very little wrong apart from win a G1 up until now. He is a lovely horse to train and a lot of work goes into him. He has placed in six G1s I think and has never really let us down, though he was little bit inconsistent last season. To win a G1 is not easy and you have to accept it.

"Lightning Spear is a wonderful horse and is very talented. To win a G1 is extra special. He was going really well and I thought if he got a gap he would win. They didn't go much of a pace, but that did not really matter. You are trying something different all the time, trying to change something. To see him fill up and quicken up like that was great, and it is the horse we see at home an awful lot. It is just getting it all to click, with that little bit of luck that we haven't had at times.

"Oisin had no instructions. Sit where you land and do your own thing. Oisin loves the horse and has confidence in the horse. We felt we were slightly robbed at Newbury, if anything, so this more than makes up for it. Oisin knows him very well and he can ride the horse as you like now.

"He has probably had his knockers, slightly unfairly I feel and so to win a G1 is great. Lightning Spear has come across some very good horses. This year, if we are being honest, there is probably not an outstanding horse in the mile division and so it has been his time. He wasn't any better or any worse when he was running in these races even two years ago. Eventually, you will come across a year where things go your way and he just looked really good today. He had everything pan out perfectly for him today.

"I do as I'm told with this horse as Jenny [Simcock's wife] rides him every day and she does a wonderful job with him. I don't think Lightning Spear would be here today without her.

"He was quite headstrong and fiery when we got him and now he is just the nicest person and very straightforward to ride. Jenny is a special part of the whole thing. Jenny and my children are so fond of him and he is just a very special horse to have in the yard."