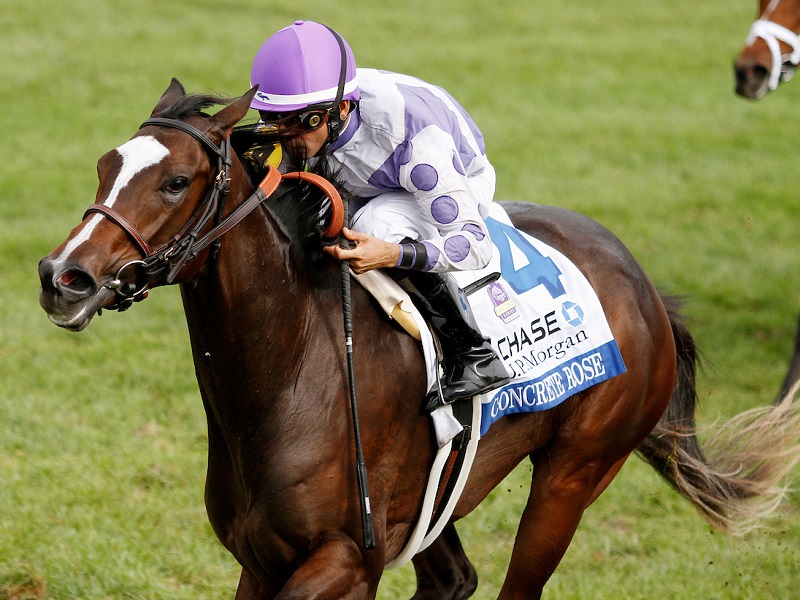 Ashbrook Farm and BBN Racing’s Concrete Rose moved to the front inside the eighth pole and powered her way to a 3-length victory over Pakhet to win the 28th running of the $200,000 JPMorgan Chase Jessamine (G2) for 2-year-old fillies before a Wednesday afternoon crowd of 9,331.

Trained by Rusty Arnold and ridden by Jose Lezcano, Concrete Rose covered the 1 1/16 miles on a firm turf course in 1:44.09 in the Breeders’ Cup Challenge race, which earned her a fees-paid berth into the $1 million Breeders’ Cup Juvenile Fillies Turf (G1) to be run Nov. 2 at Churchill Downs.

At the head of the lane, Lezcano swung Concrete Rose to the four path for clear running and by midstretch the decision was no longer in doubt as she seized control and never was threatened in the run to the finish line.

The victory was worth $120,000 and improved her earnings to $166,750 with her second victory in two starts. A Keeneland sales graduate, Concrete Rose is a Kentucky-bred daughter of Twirling Candy out of the Powerscourt (GB) mare Solerina.

Racing resumes Thursday with a 10-race program that begins at 1:05 p.m. ET.