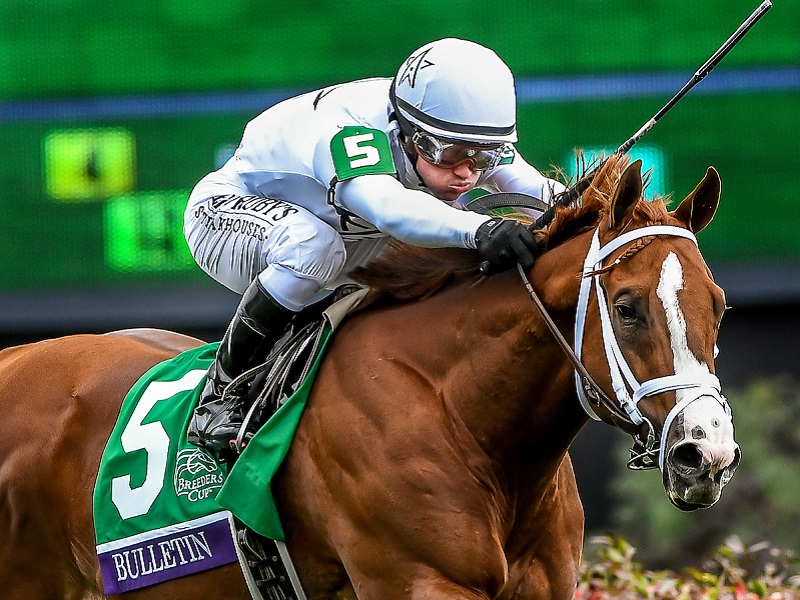 LOUISVILLE, Ky. (Nov. 2, 2018) – WinStar Farm, China Horse Club and SF Racing’s Bulletin ($10.60) rocketed out of the gate and was never headed to win the inaugural running of the $1 million Breeders’ Cup Juvenile Turf Sprint by 2 ¾ lengths at Churchill Downs Friday afternoon to kick off the 35thedition of the Breeders’ Cup World Championships and the first of five races for 2-year-olds on Future Stars Friday.

Trained by Todd Pletcher and ridden by Javier Castellano, Bulletin covered the 5 ½ furlongs on a turf course labeled as good in 1:05.54. It was the 10th Breeders’ Cup victory for Pletcher and ninth for Castellano.

A Kentucky-bred son of City Zip, Bulletin quickly opened a daylight margin with Chelsea Cloisters in closest pursuit. The two ran in that order the rest of the way and easily fended off the late challengers with So Perfect finishing a length behind Chelsea Cloisters in third and Queen of Bermuda another three-quarters of a length back in fourth.

Bulletin is now 2-for-2 with his initial victory coming at Gulfstream Park by seven lengths Sept. 29.