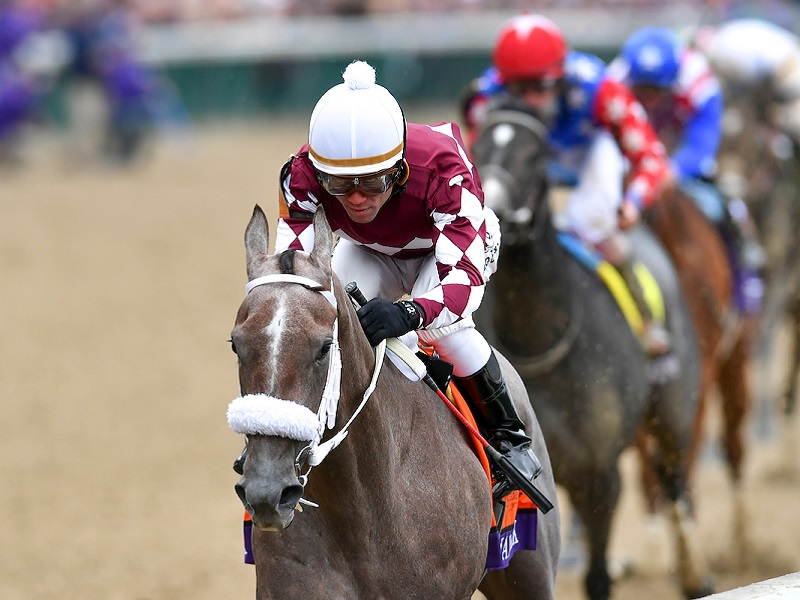 Winning trainer John Servis (Jaywalk) - "I was looking for a big effort from her, but I didn't expect for her to go to the lead again. I really thought there was enough speed in here that she'd probably be sitting off it a bit. But, Joel (Rosario) said when she left the gate, he knew right then she had running on her mind. And, he just took it from there. Once she got the front, she started flicking her ears and looked nice and relaxed."

Regarding the possibility of a return to Churchill for the Oaks: “That's a long way off, but that would nice, yes."

Winning jockey Joel Rosario (Jaywalk) - "It was a perfect trip. She broke and she wanted the lead. She just improved her position. SHe really relaxed. She broke really sharp and wanted one thing - she wanted to go, so I dropped my hands and let her be happy and let her do it the rest of the way."

Second-place trainer Kenny McPeek (Restless Rider) - "Brian (Hernandez) rode her well. She had a good trip and looks like she came back healthy. I'm proud of the way she ran. She's a good filly. She'll get her chance (to win) in the Kentucky Oaks next year. We're going to have fun with her in the spring.

"We are probably going to bring her back at the end of the meet (in the Golden Rod). We have nothing to lose now and we can knock out another stakes win."

Second-place jockey Brian Hernandez (Restless Rider) - "The whole time we sat a great trip. I had the favorite (Bellafina) in my sights at all times. When I saw she was empty I looked up and Jaywalk appeared to be gone. She ran a great race but the winner had a big advantage on the lead and we just couldn't get to her."

Third-place jockey John Velazquez (Vibrance) - "She broke a little slow and never could get into a real good position. But she still ran a good race."

Fourth-place trainer Simon Callaghan (beaten favorite, Bellafina) - “She broke a little flat footed and the rider had to use her a little bit early. After that she had a pretty good trip but it just did not seem to happen today. It is hard to know (about the surface.) It is the first time she has run over this sort of track. I am just waiting to hear what (jockey Flavien Prat) has to say.”

Fourth-place jockey Flavien Prat (beaten favorite, Bellafina) - "I had a good trip, but she never did feel quite right. SHe wasn't running smooth. I don't know if she didn't like the track or if it was an off day."