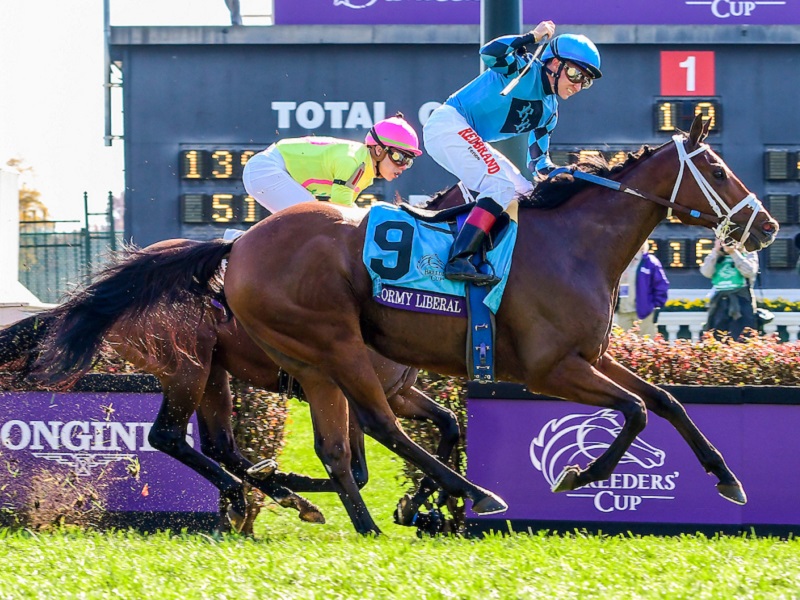 LOUISVILLE, Ky. (Nov. 3, 2018) – Rockingham Ranch and David Bernsen’s Stormy Liberal prevailed by a neck over favored World of Trouble after a stretch-long duel to win the 11thrunning of the $1 million Breeders’ Cup Turf Sprint (G1) for 3-year-olds and up at Churchill Downs on Saturday afternoon.

Winner of this race last year at Del Mar, Stormy Liberal joins Mizdirection (2012-13) as the only repeat winner of the race.

Trained by Peter Miller and ridden by Drayden Van Dyke, Stormy Liberal covered the 5 ½ furlongs on a turf course rated as good in 1:04.05. For Van Dyke, it is his first Breeders’ Cup victory and the third for Miller.

Bred in Kentucky, Stormy Liberal is a 6-year-old gelded son of Stormy Atlantic out of the Royal Academy mare Vassar.

World of Trouble assumed the lead after a quarter mile with Richard’s Boy in closest pursuit and Stormy Liberal fourth and in the clear. On the far turn, Van Dyke moved after the leader and two hooked up at the top of the lane and dueled to the wire with Stormy Liberal easing clear in the final yards.

It was another 7 ¼ lengths back to Disco Partner in third.