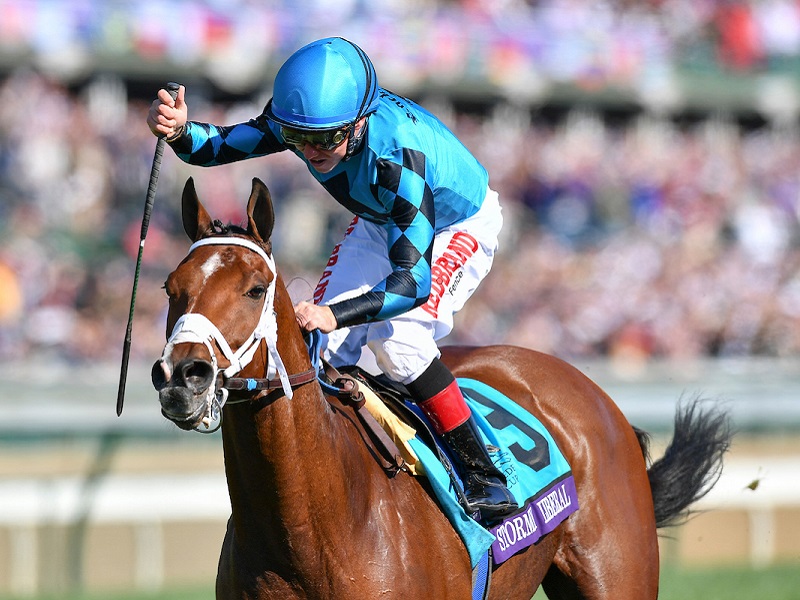 Winning trainer Peter Miller (Stormy Liberal) – “The emotions and the highs and lows I have gone through in this game in the past year are indescribable. I am just thankful to be back here. It is amazing to win this race two years in a row with this horse. It is a dream come true.”

Winning jockey Drayden Van Dyke Stormy Liberal) – “He broke really sharp. I knew there were a few who were goingto be a little bit faster than me. I bided my time and let them get by me, then just tipped him outside. From there on, it was up to him to do the running. Stormy Liberal likes to hang on horses and not pass them, but he got him. It was awesome.”

Second-place jockey Irad Ortiz Jr. (World of Trouble, beaten favorite) – “He had no excuse. He just got beat by a nice horse. He wanted to fight, but he lugged in a little bit so I wanted to be close to Stormy Liberal so he could feel (the competition). No excuse.”

Third-place jockey Joel Rosario (Disco Partner) – “He broke well and then took a little bit of time to find his stride. It looks like the turf was a little soft for him, but he came with a late run in the end. They got away, so it was hard to catch up.”

Jockey P J McDonald (Havana Gray, 12th) – “The first half of the race went great. I had a really good position, but they forced me to the inside. They went really quick. Turning for home, I knew we were beaten."