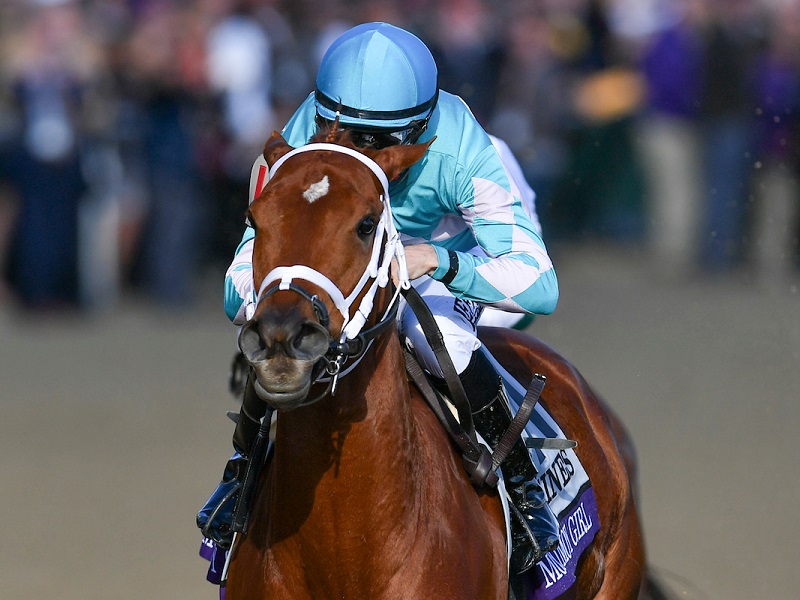 Winning jockey Florent Geroux (Monomoy Girl) – “It was a great trip. She was super-sharp. I was able to lay second off Wonder Gadot. I went to the lead past the three-furlong mark and from there she just kept on going all the way to the wire. This is a filly with great tactical speed and she loves to win. She’s just unbelievable.”

Second-place trainer Chad Brown (Wow Cat) – “We lost some position early; breaking a step slowly from that post. Then there was a horse inside of us that wouldn’t move over, so Jose (Ortiz, jockey) told me had had to take behind that horse and tuck in, which lost us a valuable couple lengths. From there on out, she was always traveling well; pretty far back, but always traveling well. Jose cut the corner, using good judgment, I thought, on the good part of the racetrack throughout the stretch. She just came up short. I think, at the end of the day, Monomoy Girl showed she’s an outstanding filly and deserving winner. Our filly has shown that she’s continuing to improve. Who knows—maybe with a better post, we would have made it a little closer at the wire. (Q: Next year she stays in training?) — Absolutely.

Second-place jockey Jose Ortiz (Wow Cat) – “I think the post position hurt us. I had to drop down to the rail and that probably cost us two or three lengths. We only lost by one (length). She ran her race.”

Fourth-place trainer Ignacio Correas IV (Blue Prize) – “We were against a special filly today. We tried to beat her but she beat us fair and square. We are happy with the way our mare ran. If I had to do it over again (with her preparation), I would do exactly the same thing.”

Fourth-place jockey Joe Bravo (Blue Prize) – “She felt and warmed up better than last time. Turning for home she still had a lot of fight left in her. She wanted to go get those horses. I’m proud of her.”

Jockey Mario Gutierez (Mopotism, fifth) – “She tried real hard all the way, but she just couldn’t catch the leaders.”

Jockey Drayden Van Dyke (La Force, eighth) – “She broke a step slow, She tried real hard today. She gave me everything she had, but it wasn’t enough.”

Trainer Mark Casse (Wonder Gadot, ninth) – “Wonder Gadot did just what we wanted her to do. Monomoy Girl is a super star.”

Jockey Joe Talamo (Vale Dori, 10th) – “We got off to a bad break and she doesn’t like that. We were back too far early and we just couldn’t catch up.”

Trainer Bob Baffert (Abel Tasman, second choice, 11th) – “She just quit. She just quit running.Sometimes they do that. I thought she was in a good spot, he (Mike Smith) got aggressive with her, but she just doesn’t want to run anymore it looks like.”

Jockey Mike Smith (Abel Tasman, second choice, 11th) – “I wish I knew what was wrong with her. I wish it was something I can tell you so we can fix it.”