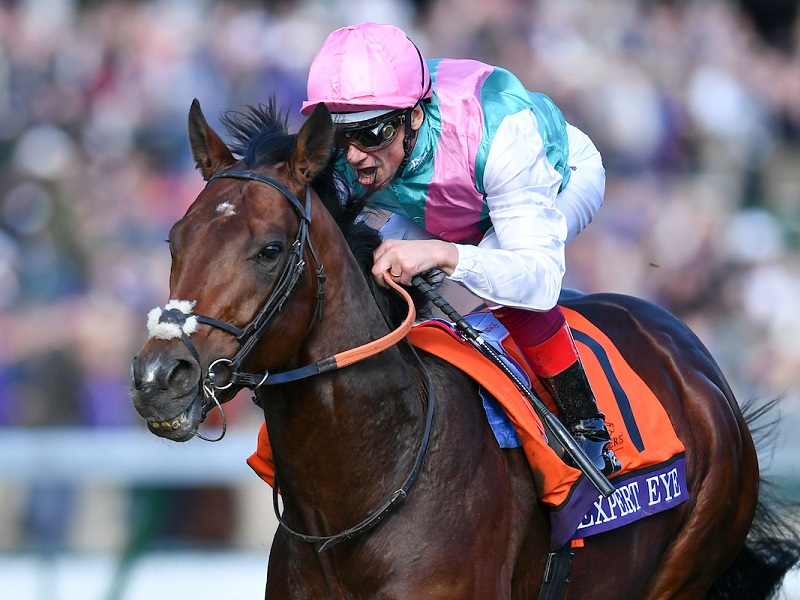 Winning trainer Sir Michael Stoute (Expert Eye) – “He’s run a great race. Last time at Chantilly, he did not get the rub of the green. I’d like to thank James Savage, who rides him out every day. He’s done a great job with him. I thought down the back straight that Frankie (Dettori) may have just had him two slots behind, but was in control. We love coming to the Breeders’ Cup.  It’s always great coming here.”

Winning jockey Frankie Dettori (Expert Eye) – “I’m thrilled with the win. (Trainer Sir) Michael (Stoute) deserves the credit for the training of the horse. He finished his race off so strongly.”

Second-place jockey Drayden Van Dyke (Catapult) – “He broke sharp and put me in a good spot on the first turn. I had a clear trip from there on out. He gave me a good kick on the far turn, passed (Analyze It) late but couldn’t hold off the one on the outside (Expert Eye) in the last couple of jumps.”

Third-place trainer Chad Brown (Analyze It) – “He ran really well – he ran super. I thought Irad (Ortiz Jr.) executed a good race. The horse showed a lot of heart down the line. He just kept fighting on and just came up a little short. We’re proud of his effort.”

Third-place jockey Irad Ortiz Jr. (Analyze It) – “The horse was training so good. He broke good and he just ran a big race and got third. He ran his heart out. He ran so good and fought the whole way. A horse moved a little early on the backside and it didn’t bother him. He came running. He’s a 3-year-old and we have a great future with him.”

Fourth-place trainer Kelly Rubley (Divisidero) –“We have been pointing to this race all year. I am not disappointed; he ran a spectacular race. That is his personality; he tries every time. He has no idea that he was in the Breeders’ Cup. Our big test for this race was (supposed to be the Shadwell Turf Mile on Oct. 6) at Keeneland but he got scratched at the gate. We are very proud of this effort today.”

Fourth-place jockey Jevian Toledo (Divisidero) – “I got into good position in the beginning after breaking from the outside. I let him pick it up early to get into position and I was kind of outside, but that’s better for him because he likes it out there. He ran so hard and he likes this track. Today he just ran so hard. I have no complaints. The other horse just came running at the end, so we have no excuse. It feels great to ride in my first Breeders’ Cup race. I’m better with that kind of horse. He always comes running hard and giving percent.”

Jockey Jose Ortiz (Oscar Performance, beaten favorite, 14th) – “He completely missed the break. He’s been breaking a step slow lately, but not as bad as today. Today, he almost stood there after the gate opened. Game over after that.”